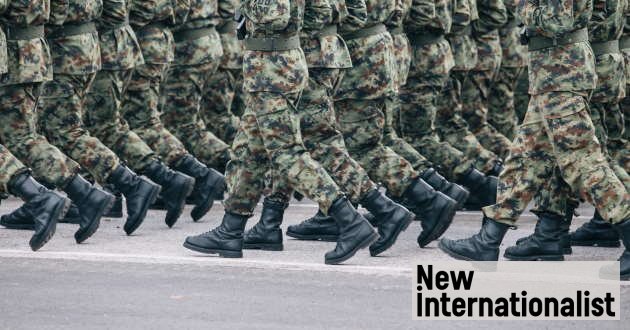 Symon Hill envision a world without the army and chart a path to peace.

Change is difficult. Even radical activists can struggle to imagine a world without established institutions and practices. Perhaps this is the reason why most anti-war activists do not call for the abolition of military forces.

There is a common misconception that armed personnel have a positive function. In fact, the armed forces exist fundamentally to engage in violence – or to intimidate – in the service of the powerful.

Of course, the violence is varied, complex and nuanced. For much of history, armies were not raised until war broke out. In Europe, until the 17th century, standing armies were considered a sign of tyranny. But as capitalism developed, the search for new markets and new materials mingled with violence as states moved to colonize, fight rival imperial powers, and suppress dissent at home. As the pacifist socialist Bart de Ligt wrote in 1937: “Without war, or at least without the threat of war, capitalism does not work”.

The military must also be challenged as an abusive institution that denies human rights to its own personnel. Too often, the armed forces recruit the poorest people, who are brutalized in military training, sent to fight other poor people, and then plunged back into poverty upon their release. This is why peace-loving progressives do not attack base force personnel as individuals, but focus on the authorities who employ them.

The justifications put forward for maintaining the armed forces do not hold water. There is a common belief that soldiers are needed to defend a country, in the event of an invasion. Yet many of the most militarily active countries in the world prepare their forces to fight abroad, not at home. Equipment belonging to the British armed forces, for example, is often designed to fight in desert conditions. It would be much less useful if Russian troops landed in Cornwall. In the unlikely event that Russian troops do in Cornwall, there was little doubt that British troops would be deployed to guard government buildings, military installations and sites of commercial importance. But defending people and cities would be a little lower on the priority list. Mass acts of non-cooperation with the invaders by civilians may well be a more effective form of resistance.

Another justification given for retaining the armed forces is the work they do to provide aid, fight fires or floods and, recently, help deal with the Covid-19 pandemic. We are rightly grateful to the people who do these things – but why do they need to be in an armed force? A country choosing to abolish its armed forces could transfer personnel to new or expanded civilian services capable of providing disaster relief.

So how could this radical reform be carried out? A progressive government would need considerable political will to carry out such a policy, as it would be difficult to resist opposition from military leaders, arms companies and other countries. But it was done – by Costa Rica, the only country to abolish its armed forces and enshrine this decision in its constitution. (Iceland’s lack of a standing army is undermined by its military agreements with NATO.)

It would require a powerful abolition movement, built through alliances with antimilitarist veterans and links with other anti-militarist activists around the world. When the armed forces were finally dismantled, there would be compensation for those who lost their jobs, alongside retraining offers.

Only a global campaign can lead to the abolition of all armed forces. Networks such as War Resisters International unite pacifists and anti-militarists around the world in campaigns like these. Citizens can also demand an end to the armed forces in our own countries, as well as continue to campaign against individual wars, arms and arms deals. But at the end of the day, it needs resistance against militarism as a whole.

The armed forces are not there to protect us, but to preserve the power of the powerful. Let us have the courage to say it.

This article is taken from the September-October 2021 issue of New Internationalist.
You can access the entire archive of over 500 issues with a digital subscription. Subscribe today »

Patreon is a platform that allows us to offer more to our readership. With a new podcast, eBooks, tote bags and magazine subscriptions on offer, plus early access to videos and articles, we’re very excited about our Patreon! If you’re not yet on board, check it out here.