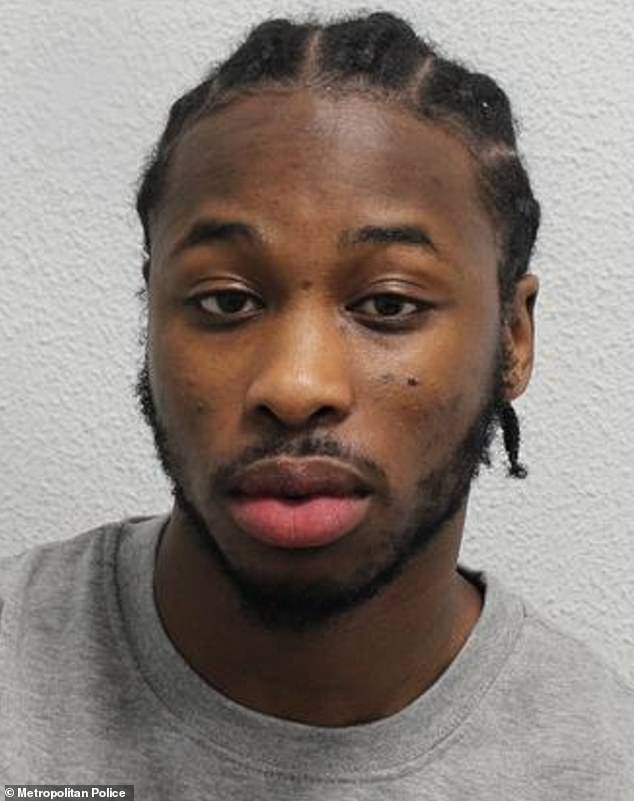 This is when a police officer pursuing a suspect has a 9mm pistol pointed directly at him during a foot chase.

PC Elwood followed the gunman on foot following a shooting at a recording studio in Woolwich, south London, in November 2020.

During the chase, which was caught on body camera, suspect Mucktar Khan turned and pointed a Turkish Retay 9mm semi-automatic handgun at PC Elwood and his dog, PD Cruz.

Khan made ground after pointing the gun at PC Elwood, but as soon as he rounded the next corner he was confronted by several firearms officers who arrested him.

Khan and three of his accomplices were imprisoned for a combined total of more than 30 years. 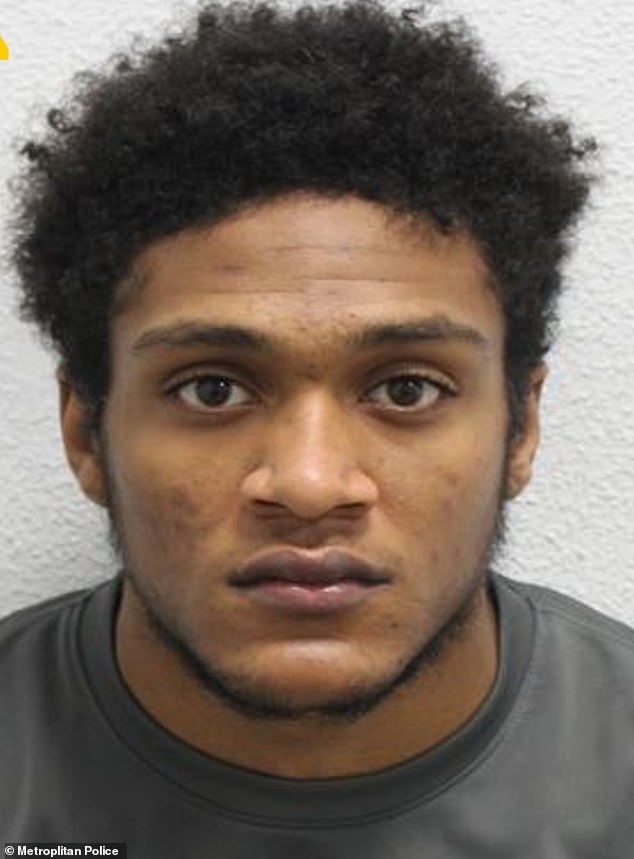 Myiles Brown, 22, was jailed for seven years and six months after being found guilty of possessing a firearm 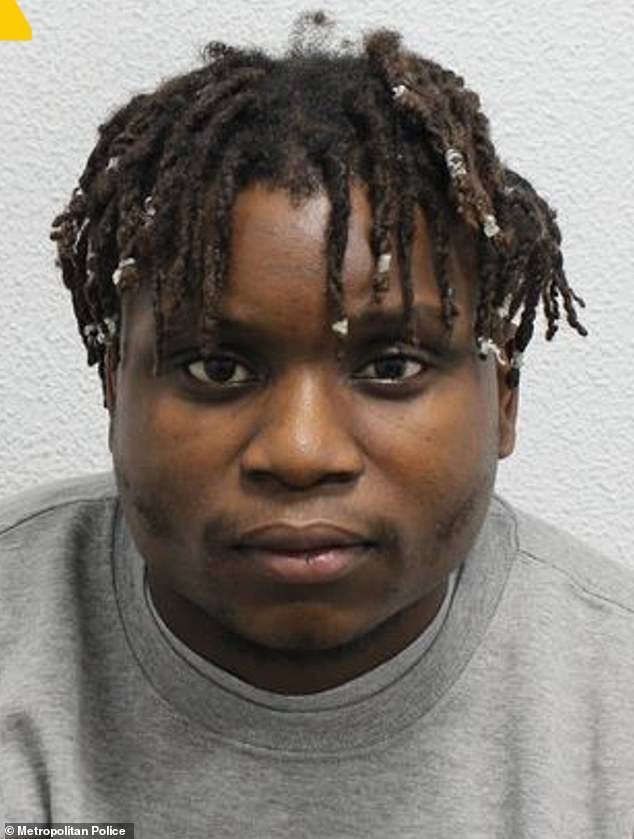 Joshua Fasoro, 21, was sentenced to eight years and six months in prison after his DNA was linked to the recovery of a revolver in 2019 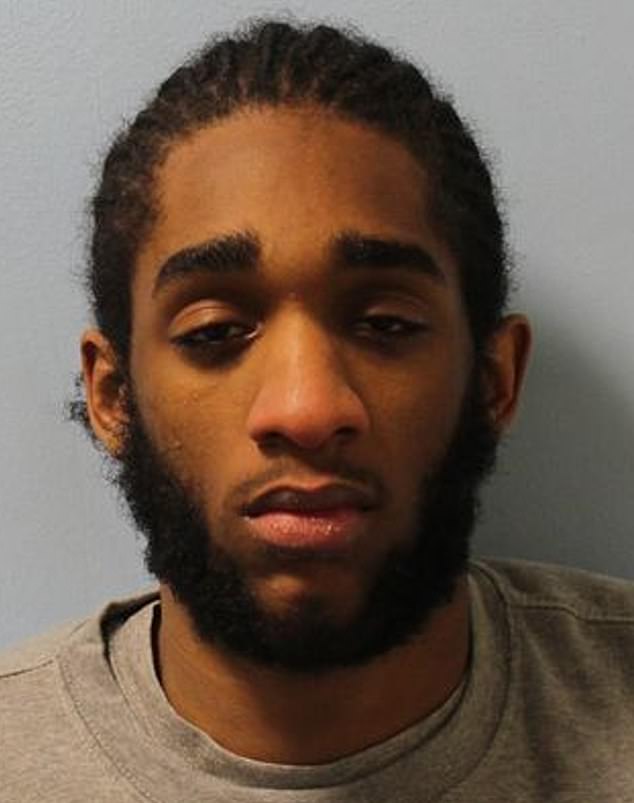 Don-Juan Newman, 23, was jailed for seven years and six months for his role in the crime 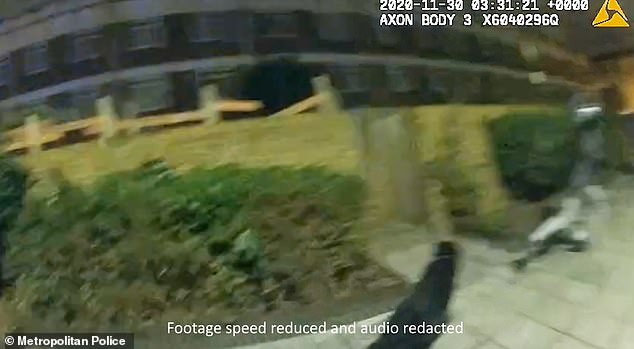 Khan, pictured right, pointed a semi-automatic handgun directly at PC Elwood who was pursuing him

Speaking after the trial, PC Elwood said: ‘When the gun was pointed directly at my face my instant reaction was to turn away in fear, I thought I was about to be kill. However, I continued to pursue them as they were dangerous individuals who needed to be taken off the streets. If I hadn’t continued to pursue them, they would have fled and still had access to a deadly firearm.

“The presence of two police dogs during this incident was decisive. One of the dogs found an abandoned firearm and another played a significant role in the capture of one of the suspects.

“I joined the police so I could stop violent and dangerous criminals who pose a risk to society from harming communities and this case is a classic example of that.”

Croydon Crown Court heard that on Monday November 3, 2020, police were called following a shooting at a recording studio in Woolwich Church Street, SE18. A woman and a man were injured after the shooter fired three shots at a group of people.

The shooter and his accomplices attempted to flee in a stolen car. According to Scotland Yard, the gang crashed into a parked car and attempted to escape on foot.

Five gang members abandoned the car but police have so far failed to identify the fifth suspect.

His co-accused, Myiles Brown, 22, from Brixton, was sentenced to seven years and six months in prison following his conviction for possession of a prohibited firearm.

Joshua Fasoro, 21, from Brixton was also found guilty of possession of a firearm. When officers tested his DNA, he was also linked to the recovery of a gun from an electrical cabinet in 2019. He was jailed for eight years and six months. 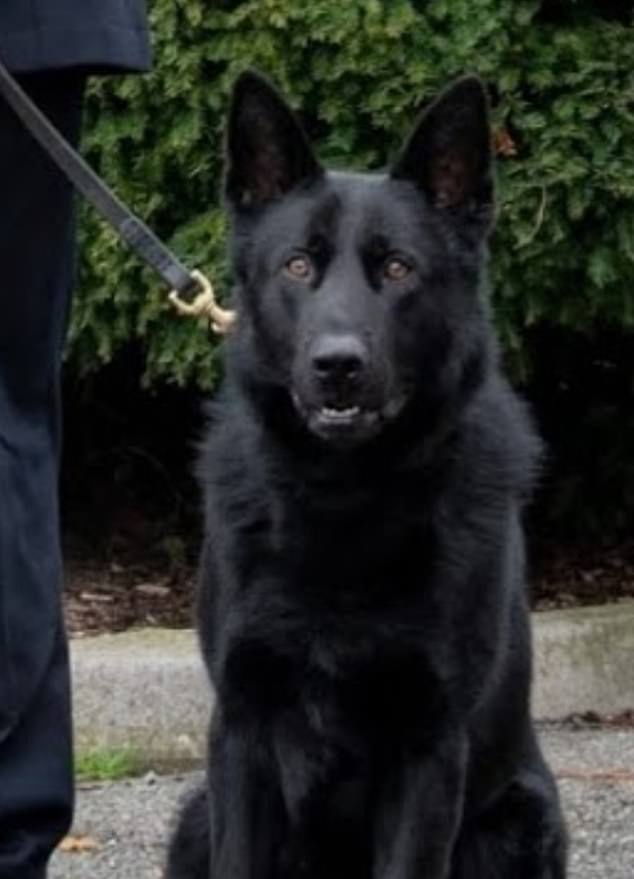 All four were acquitted of the attempted murder of the man and woman.

The investigation was carried out by detectives from Operation Trident.

Trident Detective Constable Andy Brackley said: ‘The actions of these four men that night were brazen and extremely reckless. We do not believe that the two victims shot that night were the intended targets and it is only by sheer luck that their injuries were not fatal. Although both have recovered, they are still suffering from the long-term health consequences of their injuries.

“It was the immediate and coordinated response of officers that night that led to our capture of these dangerous offenders. Addressing violence is the Met’s number one priority and our plans are robust, with highly skilled and trained officers responding to incidents as they occur.

“The footage from the officer’s body-worn camera is shocking and shows the bravery and dedication that officers can sometimes face. PD Cruz was also instrumental that night in the arrest of one of the offenders.

Scotland Yard said that in 2021/22 officers recovered 557 firearms from the streets.