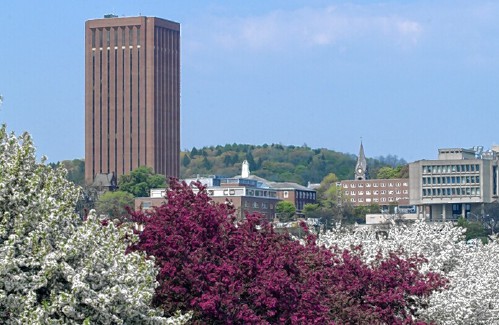 AMHERST — The University of Massachusetts placed its campus on lockdown Tuesday afternoon because of someone on campus threatening to harm themselves — someone first described it as a “hostile armed person” in a emergency alert sent to campus.

In an email to campus, the UMass Police Department said a person threatening self-harm drove to campus near University Health Services, where campus and city police “placed him in custody without incident” around 12:47 p.m.

“No one was harmed and there is no continued threat to the community,” the email said. “A handgun and ammunition were found inside the individual’s vehicle. He was transported to an area hospital. The person is not a student, staff member, or faculty member of UMass Amherst.

The incident led campus police to issue a shelter-in-place and stay-in alert at 12:40 p.m., describing the incident as a “hostile armed person” on campus. Shortly after, a second alert was sent to inform the campus that the person was in custody and could resume normal activities.

“All clear,” the message read.

Dusty Christensen can be contacted at [email protected]