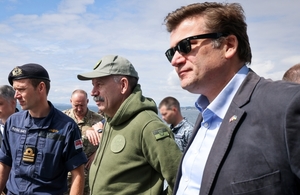 On a visit to see firsthand how Britain continues to support its nation, Ukraine’s deputy defense minister saw soldiers and sailors training there.

In order to help Ukraine defend itself against Russia’s illegitimate invasion, the UK took the lead.

As well as donating more military equipment than any other country outside the US, the UK has also launched a program to train 10,000 Ukrainian soldiers.

In order to determine what additional aid is needed to meet the demands of the Ukrainian Armed Forces, Volodymyr Havrylov met with British Armed Forces Minister James Heappey and visited lawmakers.

Ahead of the sale of two Sandown-class minehunting vessels in a deal struck last year as part of Ukraine’s Naval Capability Enhancement Program, the two ministers then traveled to Scotland, where Ukrainian sailors are trained by the Royal Navy to operate these vessels (UNCEP).

Ministers Havrylov and Heappey interacted with Royal Navy trainees and instructors while watching them practice crucial maritime skills, including damage control and weapons drill, while learning to use ships’ equipment.

James Heappey, the Minister of the Armed Forces, observed that Ukrainian sailors and soldiers exercise with incredible rigor.

They work with the concentration of soldiers who are aware that they will be fighting a war in a few weeks.

It is difficult to provide such intense and focused teaching. The Royal Navy and the British Army devote long hours and use all their operational expertise to ensure that their new Ukrainian comrades have the best chance of winning when ordered to fight.

I witnessed the camaraderie of Ukrainian and British soldiers cooperating to advance the combat prowess of the Ukrainian military, according to Deputy Defense Minister Volodymyr Havrylov.

We are extremely grateful to the British government and people for their crucial assistance in helping Ukraine successfully repel the Russian aggressors.

The two ministers also visited one of the facilities where Ukrainian soldiers are being trained in crucial combat capabilities as part of a major new military initiative led by the UK.

The initiative, which takes place at military installations in the North West, South West and South East of the UK, involves more than 1,000 British military personnel.

Each course will last several weeks and will be taught by members of the 11th Security Force Assistance Brigade.

Volunteer recruits will receive the training necessary to be effective in front-line combat despite little prior military experience.

The school covers weapons handling, battlefield first aid, field craft, patrol tactics and the law of armed conflict and is based on the basic training of UK soldiers.

↯↯↯Read more on the subject on TDPel Media ↯↯↯