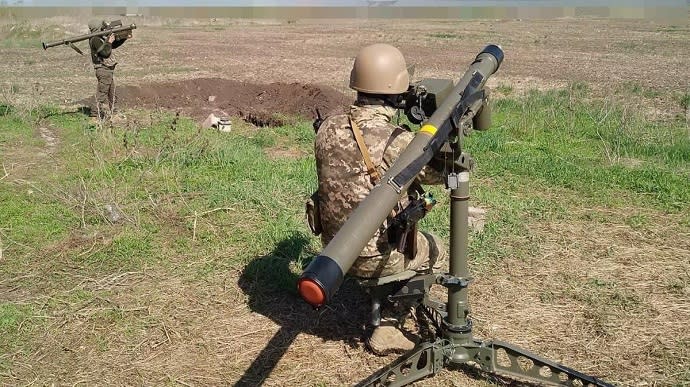 Two Russian command posts and an airstrip in Nova Kakhovka were hit by Ukrainian armed forces.

Quotation: “Morning and afternoon [of 13 July – ed.]of them [Russian – ed.] Ka-52 [helicopters – ed.] conducted three airstrikes on our positions in Kherson Oblast. There were no casualties.

In addition, two Su-27 fighter jets attempted to bomb Zmiinyi (Serpent) Island. The bombs missed their target, landing in the sea near the island.

In Kherson Oblast, our anti-aircraft missile unit successfully shot down an Eleron-3 drone that the enemy deployed to conduct reconnaissance of our positions in the Bilozersk hromada [amalgamated territorial community – ed.]. A [Russian – ed.] the suicide drone “was caught red-handed” in the Velyka Oleksandrivka hromada; Ukrainian forces destroyed it before it caused any damage.” [A loitering munition, also known as a suicide drone or kamikaze drone, is an aerial weapon system category in which the munition loiters – waits passively – around the target area for some time and attacks only once a target is located – ed.]

Details: Operational Command in Pivden (south) reports that 13 Russian servicemen were killed and six armored and other vehicles were destroyed as a result of combat missions carried out by Ukrainian missile and artillery units in southern Ukraine .

In addition, Ukrainian armed forces hit two Russian command posts and an airstrip in Nova Kakhovka. Total losses suffered by Russian forces in southern Ukraine on July 13 are being confirmed.