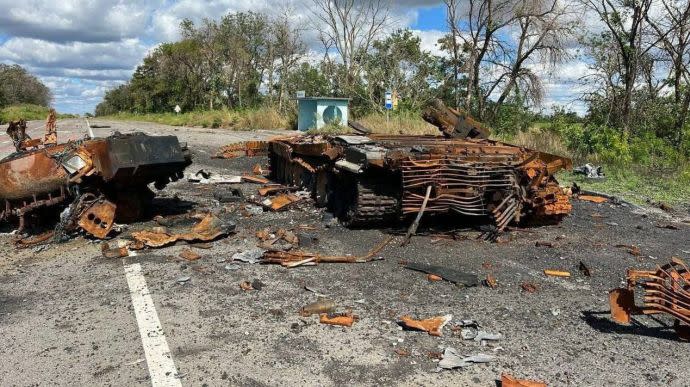 On Friday, September 9, the Ukrainian armed forces managed to repel Russian attacks near 10 different towns and villages. Meanwhile, the Russian occupation forces carried out more than 12 missile strikes and 12 airstrikes during the day.

Source: The General Staff of the Armed Forces of Ukraine on Facebook, information at 6:00 p.m. on September 9

Additionally, Russian forces have deployed drones to conduct extensive aerial reconnaissance, carrying out a total of more than 60 sorties.

The morale and psychological state of the Russian soldiers deteriorated markedly and cases of desertion became more frequent, due to the heavy losses suffered by the Russian army and a lack of will to participate in combat. In the temporarily occupied territory of Kherson Oblast, near the village of Babenivka Druha, Russian forces were forced to deploy helicopters and weapons to search for deserters and bring them back to battle positions. Unarmed Russian soldiers are also transported, by bus, to Crimea temporarily occupied by Russia via Kalanchak.

During the day, Ukrainian Air Force aircraft supported the actions of Ukrainian ground troops by carrying out more than 10 strikes on Russian strongpoints on the Donetsk and Pivdennyi Buh fronts, destroying military equipment Russians and anti-aircraft defense systems. , and killing a significant number of Russian servicemen.

In addition, fire missions carried out by the Armed Forces of Ukraine destroyed or damaged three Russian command and control points as well as a pontoon and hit 28 areas where Russian military personnel and equipment were concentrated. Russian ammunition storage points and artillery positions also came under Ukrainian fire. The losses suffered by the Russian forces have yet to be confirmed.