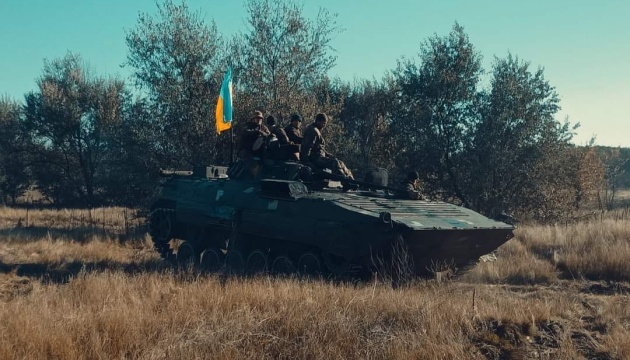 During the day, Ukrainian troops repelled Russian attacks near four populated settlements. Twenty airstrikes were launched on the invaders.

This is stated in the report of the General Staff of the Armed Forces of Ukraine at 6:00 p.m., October 18, posted on Facebook.

As noted, Russian troops are trying to retain temporarily captured territories and are focusing their efforts on limiting the actions of the Ukrainian Defense Forces in certain areas. At the same time, the enemy keeps trying to go on the offensive in the Bakhmut and Avdiivka directions.

The invaders bombard the Ukrainian positions along the line of contact, reinforce their positions and defensive lines in certain directions and carry out aerial reconnaissance. Violating international humanitarian law and the laws and customs of war, the enemy continues to strike critical infrastructure and civilian homes.

Areas of more than 10 settlements, including Kyiv, Zhytomyr, Kharkiv, Dnipro, Kryvyi Rih, Zaporizhzhia, Mykolaiv, Kurakhove of Donetsk region and Trykhaty of Mykolaiv region, came under enemy fire during the day.

According to data from the General Staff, the Russians used guided cruise, aviation and anti-aircraft missiles to launch the strikes. In one direction, the invaders used four Iranian-made Shahed-136 drones, three of which were shot down by units of the Ukrainian Defense Forces.

The situation has not changed significantly in the Volyn and Polissia directions. The Republic of Belarus continues to support the armed aggression of the Russian Federation against Ukraine, providing its infrastructure and airspace.

There is a threat of missiles and air strikes, as well as the use of Shahed-136 combat drones from the territory of Belarus.

In other directions, Russian troops opened fire. In particular, in the direction of Siversky, the enemy hit the village of Yunakivka of the Sumy region with tube artillery.

In the direction of Lyman, Russian troops fired mortars, tubes and rockets into the areas of Bilohorivka, Hrekivka, Zarichne, Kovalivka, Nadia, Novoyehorivka, Olhivka and Torske.

In the Bakhmut and Avdiivka directions, the enemy opened fire from tanks and artillery along the line of contact. The settlements of Bakhmut, Soledar, Pervomaiske and Velyka Novosilka were affected.

In the Novopavlivka and Zaporizhzhia directions, the Russians opened fire with mortars, tubes and rockets on Pavlivka and Prechystivka.

Heading south from Buh, the invaders try to improve their logistics, bomb military and civilian infrastructure. Settlements along the line of contact, including Vyshchetarasivka, Dnipropetrovsk region, were hit.