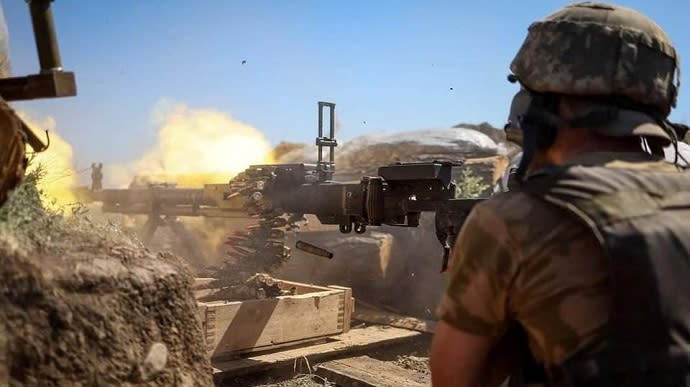 Ukrainian armed forces repelled Russian attacks in several towns and villages on the Bakhmut front in eastern Ukraine. In the past 24 hours they have destroyed Russian military equipment and killed up to 150 Russian occupation soldiers.

Source: General Staff of the Armed Forces of Ukraine on Facebook, information at 06:00 on Sunday, June 12

Details: On the Volyn and Polissia Fronts, the Russian forces did not undertake active combat operations. The Belarusian Armed Forces perform combat engineering tasks to reinforce checkpoints and deploy additional electronic warfare equipment in areas near the Belarusian-Ukrainian border (in Belarus).

On the In front of Silvershchyna, Russian forces have intensified the security of the Ukrainian-Russian border in Bryansk and Kursk oblasts (in Russia), where an increased level of terrorist threat is still in place. Russian forces fire at the positions of the Ukrainian Defense Forces with mortars in the border areas of Ukraine. In addition, Russian troops fired on civilian infrastructure in areas around Rozhkovychi, Hremiach, Luhivka and Popivka.

On the Kharkiv Front, the situation remains unchanged. The Russian forces systematically fire on the positions of the Ukrainian units in order to pin down the Ukrainian troops. In addition, Russian troops fired at civilian infrastructure near Virnopillia, Ukrainka, Petrivka, Chepil and Khrestyshche. Russian planes carried out an airstrike near the village of Mospanove.

On the Sloviansk Front, Russian forces systematically fired artillery at the towns and villages of Petrivske, Nova Husarivka, Kurulka and Dolyna. Russian troops train to gain a foothold in the village of Bohorodychne, where fighting continues.

Russian troops did not undertake active combat operations on the in front of Lyman. Russia has intensified its use of artillery – especially Multiple Launch Rocket Systems (MLRS) – in the area around Shypylivka and Dronivka. Russian troops regroup.

On the Bakhmut Facade, Russian troops fired on Ukrainian positions with mortars and cannon and jet artillery in areas near Komyshuvakha, Hirske, Mykolaivka, Bilohorivka and Novoluhanske. Russian planes carried out an airstrike near Pokrovske.

Ukrainian armed forces repelled a Russian attack near the town of Vrubivka. Russian forces also attempted to advance on the village of Mykoalivka, but were decisively repelled and forced to retreat. The Ukrainian defenders also managed to repel a Russian attack on Vasylivka. The Russian occupation forces suffered casualties and retreated to the positions they had previously held.

On the Avdiivka, Kurakhove, Novopavlivka and Zaporizhzhia fronts, Russia did not undertake active combat operations. Russian forces shelled civilian infrastructure in Zhelanne, Avdiivka, Karlivka, Vuhledar and Orikhiv. On some of these fronts, Russia has deployed additional units.

On the Pivdennyi Buh before, Russia took a defensive position and continued to fire on Ukrainian troops with artillery, mortars and MLRS. Russian forces launched counter-battery fire in order to neutralize Ukraine’s fire support systems.

Over the past 24 hours, Russian forces have lost 10 tanks, 16 armored fighting vehicles, 7 drones, more than 10 motor vehicles and up to 150 military personnel.