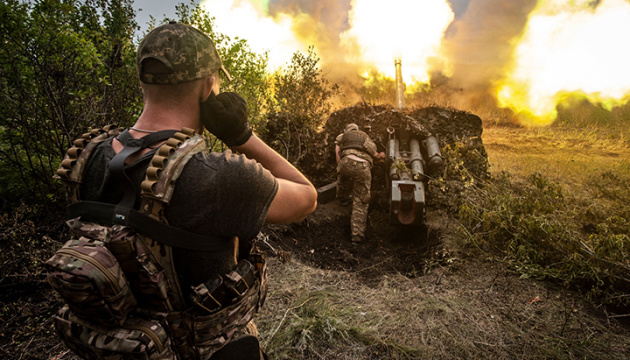 This is stated in the report of the General Staff of the Armed Forces of Ukraine at 6:00 p.m., September 3, posted on Facebook.

“The units of the Defense Forces hold their positions and do not allow the enemy to advance deep into the territory of our state. The Defense Forces managed to successfully repel enemy attacks in the areas of the settlements of Dolyna, Soledar, Novobakhmutivka, Kodema, Zaytseve, Avdiivka, Marinka,” the report read.

According to data from the General Staff, during the day the Ukrainian air force launched more than five strikes in support of the actions of ground groups, during which enemy equipment, electronic warfare systems, systems air defenses and many servicemen were eliminated in the directions of Donetsk and southern Buh. .

According to data from the General Staff, Defense Forces missile and artillery troops damaged three enemy checkpoints. An enemy personnel deployment facility was destroyed. It should be noted that a Russian special forces unit was in the affected area. Loss information is being clarified.

In addition, electronic warfare equipment and the ammunition depot were destroyed, which significantly limited the enemy’s ability to conduct offensive operations.

According to the General Staff, offensive and assault operations are underway in the Bakhmut and Avdiivka directions. The enemy actively uses air defense systems to cover his troops. The enemy did not conduct active combat operations in the directions of Kramatorsk and Novopavlivka.

At the same time, according to the data of the General Staff, the invaders strengthened the administrative and police regime in the localities located on the banks of the Dnipro and the defense of the coastline in the temporarily captured areas of the Zaporizhzhia and Zaporizhia regions. Kherson.

In addition, state enterprises of the Russian Federation received the new standards for the selection of “volunteers” for war. In particular, the Russian Railways company was ordered to search for up to 10,000 new candidates for a short-term contract among civilian employees, reports the General Staff.

At the same time, it is stressed that there is still a threat of massive and systematic airstrikes and missile strikes on military installations and critical infrastructure throughout the territory of Ukraine.

The General Staff informs that the situation in the Volyn and Polissia directions has not changed significantly. The Armed Forces of the Republic of Belarus check the readiness of field communication systems in preparation for command and staff exercises.

In other directions, the enemy attacked military and civilian infrastructure using tanks, combat vehicles, tube and rocket artillery. In particular, in the direction of Siversky, three localities of the Chernihiv region and one locality of the Sumy region; in the direction of Kharkiv – the regions of Krasnopillia, Prudianka, Ruski Tyshky, Cherkaski Tyshky, Ruska Lozova, Staryi Saltiv, Pryshyb, Husarivka, Nortsivka; in the direction of Sloviansk – Karnaukhivka, Nova Dmytrivka, Velyka Komyshuvakha.

In the direction of Kramatorsk, Bohorodychne, Raihorodok and Siversk came under fire;

In the southern direction of Buh, the enemy army opened fire along the entire line of contact. In addition, the enemy carried out reconnaissance with the active use of UAVs, making more than 30 sorties in total, the General Staff informs.