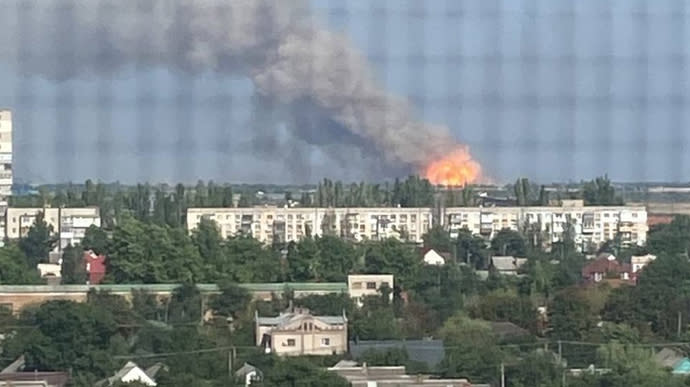 Ukrainian army missile and artillery units hit the location of the occupation troops’ base in Chornobaivka.

Quotation: “The enemy continues to conduct hostilities along the occupied defense line. They have started to prepare an assault group on the Kryvyi Rih front.

It is likely that the enemy is preparing a counter-offensive aimed at reaching the administrative border of Kherson Oblast.”

Details: The Russian aggressors attempted combat reconnaissance under cover of two tanks along the Sukhyi Stavok – Bilohirka line. They failed and pulled out with losses.

However, they launched two airstrikes and two rocket strikes on Ukrainian positions later in the day.

The attacks were carried out from the temporarily occupied territories of the Kherson and Mykolaiv regions along the line of contact by helicopters and Smerch (Tornado) multiple rocket launchers.

Mykolaiv was also attacked again during the day. Two surface-to-air rockets fired by Uragan MLRS hit the suburbs. No casualties or damage were reported.

Three X-101 cruise missiles were shot down by a Ukrainian anti-aircraft missile unit in the Bashtanka district.

Ukrainian aircraft carried out three strikes on Russian strong points and one strike on a concentration of weapons and equipment in Beryslav and Bashtanka districts.

Missile and artillery units launched a fire attack against the base of the occupation forces in Chornobaivka.

Currently, the confirmed losses of the aggressors include 20 invaders, two T-72 tanks, one Msta-B howitzer and 4 other vehicles, including armored vehicles.

“Enemy final casualties are being verified,” the report said.

Furthermore, Operational Command Pivden notes: “A boat derrick was destroyed by an unknown craft at the entrance to the Black Sea from the mouth of the Danube at Bystre.

The crew organized the fight for survival. The damage is not critical and there were no casualties. A ship pushing into port helped bring the crane back to the main base point.”

The group of ships of the Russian Black Sea Fleet consists of 13 warships and boats sheltering in missile-protected areas. Two of them carry 16 Kalibr missiles and 3 are large landing ships.