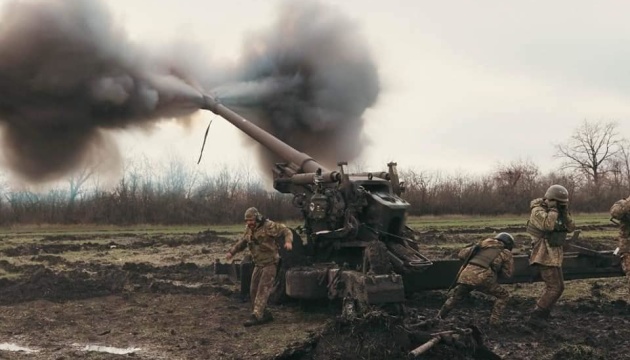 During the past day, units of the Defense Forces repelled Russian attacks in the Andriivka, Bakhmut, Klishchiivka, Krasnohorivka, Marinka, Ozarianivka, Opytne and Yakovlivka settlement areas of the Donetsk region. Missile and artillery units hit four enemy groups, an air defense position and another significant enemy object.

This is stated in the report of the General Staff of the Armed Forces of Ukraine at 06:00, November 24, posted on Facebook.

Over the past day, the enemy launched 78 missile strikes, 23 airstrikes, more than 70 MLRS attacks against Ukrainian positions and populated settlements.

“During a massive attack on residential buildings and energy infrastructure in Kyiv city, Kyiv, Vinnytsia, Lviv, Kirovohrad, Zaporizhzhia, Kharkiv and Donetsk regions, the forces of occupation forces launched 67 cruise missiles and up to 10 Lancet combat drones. The Ukrainian Defense Forces shot down 51 missiles and 5 drones,” the report said.

In the Volyn and Polissia directions, the situation has not changed significantly and no signs of the formation of enemy offensive groups have been detected.

In the direction of Siversky, the enemy shelled the areas of the settlements of Hai and Khrinivka in the Chernihiv region and Basivka, Seredyna Buda and Yasna Polyana in the Sumy region with rockets and artillery tubes.

In the direction of Slobozhansky, the enemy keeps its troops in the border areas of the Belgorod region to carry out demonstration actions. The enemy periodically fires mortars and artillery guns at the Ukrainian positions, as well as at the settlement areas of Bolohivka, Veterynarne, Hlyboke, Dvorichne, Izbytske, Krasne, Kudiivka, Ohirtseve and Strilecha in the Kharkiv region.

The enemy defends itself in the directions of Kupyansk and Lyman, opens fire from tanks, mortars and tube artillery, especially in the areas of Berestove, Vilshana, Vyshneve, Kyslivka, Krokhmalne, Tabaivka in the Kharkiv region; Makiivka, Novoselivske, Stelmakhivka and Ploschanka in the Lugansk region; Terny, Torske and Yampolivka in the Donetsk region.

In the Bakhmut and Avdiivka directions, the enemy is concentrating its efforts on conducting offensive operations, tank fire and the full range of artillery in the areas of the settlements of Avdiivka, Andriivka, Bakhmut, Bakhmutske, Berkhivka, Verkhniokamyanske , Vyimka, Vodiane, Hryhorivka, Klishchiivka, Krasnohorivka, Marinka, Nevelske, Pervomaiske, Rozdolivka and Yakovlivka.

In the directions of Kryvyi Rih and Kherson, the enemy does not stop the artillery shelling of Ukrainian positions and settlements on the right bank of the Dnipro. The enemy fires cannons and rockets at Antonivka, Beryslav, Veletensky, Bilozerka, Dniprovske, Dudchany, Kachkarivka, Novooleksandrivka, Poniativka, Stanislav, Tokarivka, Shyroka Balka in the Kherson region and the city of Kherson. The enemy improves the logistic support of forward units and fortifies positions in the specified directions.

Over the past day, the Ukrainian Air Force hit six groups of enemy personnel, weapons and military equipment and two positions of anti-aircraft missile systems.

Photo: General Staff of the Armed Forces of Ukraine