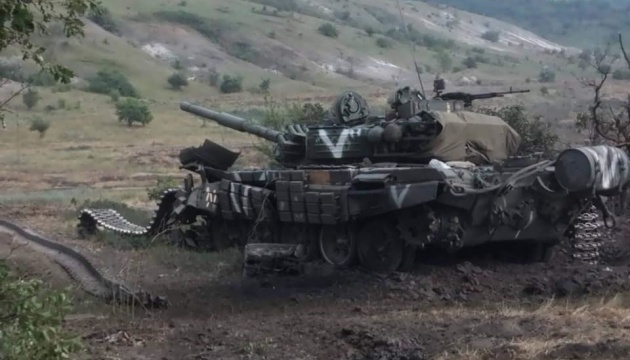 Confirmed enemy losses in southern Ukraine today amount to 15 military and more than 60 units of equipment, including 57 armored vehicles and automotive equipment.

“The overall situation in the operational zone of the southern regions is tense, dynamically developing, but controlled by the defense forces. The enemy continues to carry out combat operations on its defense lines, using insidious tactics of shelling Ukrainian rear areas and launching airstrikes,” Operational Command “South” posted on Facebook.

At dawn, the Russians launched a massive missile strike from the Nova Kakhovka area using S-300 anti-aircraft missile systems. The high-fragmentation high-explosive shells were used to shell the Bereznehuvate district of the Mykolaiv region, where objects of the railway infrastructure were hit, and the Velyka Oleksandrivka community of the Kherson region, where elevators, fields and roads outside populated localities were affected. No major damage or casualties were reported.

In the Plotnytsky tract area, the enemy, trying to halt the advance of Ukrainian troops, fails in ground operations and continues to attack from helicopters. Two of these attack attempts failed; The Ka-52s had to retreat dodging return fire.

Instead, Ukrainian missile and artillery units inflicted heavy damage on the Russian Guards command post near the city of Kherson and destroyed ammunition depots in various districts of the Kherson region, reports the report.