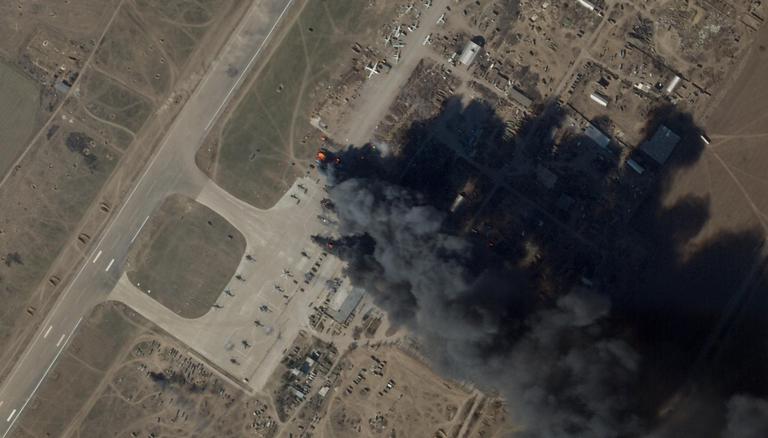 In a significant development, Ukrainian troops claim to have inflicted a crushing blow on Kherson airport, which had been seized by Russian soldiers earlier in the conflict. Ukraine reported on Thursday that its soldiers attacked Kherson airport as part of a counter-offensive aimed at driving Russian troops out of kyiv and other key Ukrainian towns.

At the start of the current war, Russia captured the southern port city without any struggle. Control of Kherson allows Russia to reintroduce fresh water supplies to Crimea, which had been cut off by Ukraine after Russia annexed the peninsula in 2014. Additionally, the Ukrainian military has announced yesterday that it launched a counterattack in Kyiv and other vital cities as President Volodymyr Zelenskyy called on the US Congress to provide more weapons and increase economic pressure on Russia.

Overnight, the sound of distant shelling echoed through central kyiv, as Ukrainian forces appeared to launch a counter-offensive in the outlying towns of Irpin, Bucha and Hostomel, which have been badly battered by weeks of war of street and artillery exchanges. On Wednesday, the city and surrounding areas were placed under an all-day curfew. The Ukrainian army also claimed to have launched an offensive south and east of Mykolaiv, the port in southern Ukraine.

Moscow has remained mostly silent on combat casualties, saying the campaign is on track. In addition, a Russian bomb demolished the city’s main drama theatre, where hundreds of citizens had sought refuge from the shelling, according to local officials in the beleaguered port city of Mariupol. Officials said a bomb shelter under the theater was blocked by rubble and the city had yet to record any casualties.

Additionally, officials in Rivne, western Ukraine, raised the death toll from an attack on a TV tower earlier this week to 21, from nine on the day of the incident. At least ten people queuing outside a bakery in Chernihiv, the northern Ukrainian city, were killed when artillery fire landed nearby, according to Ukrainian news agencies. They were shot by Russian soldiers, according to the US Embassy’s Twitter account.