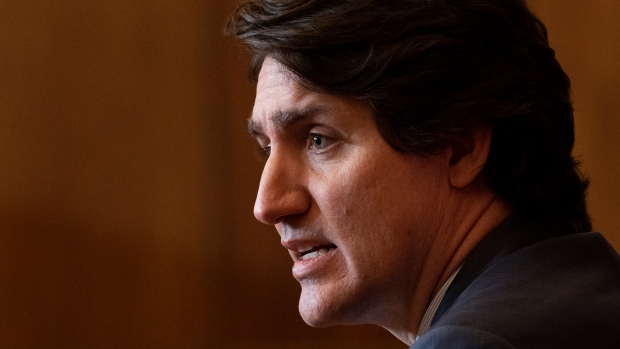 Trudeau said Russia’s military buildup in various regions along the border is “absolutely unacceptable” and that Canada is prepared to proceed with “serious consequences” if the situation escalates further.

“We fear an armed conflict in Ukraine. We are very concerned about the position of the Russian government, what it says and the fact that it sends soldiers to the Ukrainian border. This is a concern shared by our allies around the world,” he said in French.

Trudeau held a call with key ministers on the file Tuesday evening, including Foreign Affairs Minister Melanie Joly, who is meeting with senior officials in Ukraine this week.

He reiterated that Canada continues to support the Ukrainian Armed Forces and National Guard in training exercises as part of Operation UNIFIER.

The mission is due to expire in March 2022 and when asked if the government would announce an extension, Trudeau only said the operation was an “ongoing commitment”.

The United Kingdom and the United States have started sending defense weapons to Ukraine in response to direct requests. The Canadian government has said it is very aware of the needs and will make a decision on this level of support “in due course”.

Instead, the Prime Minister doubled down on Canada’s diplomatic approach, working with allies to find a solution.

“We are working with our international partners and colleagues to make it very, very clear that Russian aggression and further incursion into Ukraine is absolutely unacceptable. We are there with diplomatic responses, with sanctions, with a full press on the international stage to ensure that Russia respects the Ukrainian people, respects their choice to choose their governments and their direction,” he said.

“We will always be there for the Ukrainian people.”

US Secretary of State Antony Blinken arrived in Kyiv on Wednesday to meet with Ukrainian officials about the situation.

There, Blinken said Russia was considering boosting its military presence by some 100,000 troops along the border and suggested that number could soon double. Blinken also said he would not present an official written response to Russia’s demands when he met the Russian foreign minister on Friday.

Joly is due to meet NATO Secretary General Jens Stoltenberg on Thursday.

With an Associated Press file