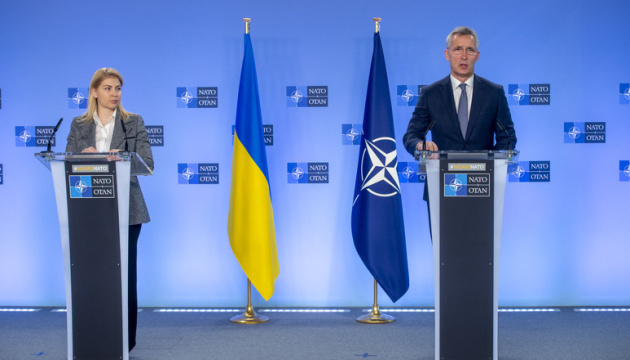 A series of diplomatic events in Europe this week, including the Russian-American talks in Geneva, the NATO-Russia Council and the OSCE talks on European security, are unlikely to address all existing issues but will help to start the negotiation process to prevent a new military conflict in Europe.

So said NATO Secretary General Jens Stoltenberg, who answered a question from an Ukrinform correspondent at today’s press conference ahead of a NATO Commission meeting. -Ukraine with the participation of the Ukrainian Deputy Prime Minister responsible for European and Euro-Atlantic integration, Olha Stefanishyna.

Stressing that he welcomes the meetings to be held this week, Stoltenberg said he did not think “we can expect these meetings to solve all the problems”.

At the same time, he said, everyone must be prepared for Russia, once again, choosing the path of using its armed forces, choosing confrontation rather than cooperation.

“We must also send a very clear message to Russia that we are united, that there will be serious economic and political costs for Russia if it again uses military force against Ukraine. We give our support to it. ‘Ukraine, helping it uphold the right to self-defense, “Stoltenberg said, adding that NATO was” very clear “about the commitments to protect and defend all Allies.

He noted that the current situation with Russia’s military build-up around Ukraine only confirms the relevance and importance of NATO’s two-pronged approach to Russia, l ‘Alliance pursuing a strong policy of deterrence and defense while seeking constructive dialogue.

“I think the NATO-Russia Council is an important platform. All these platforms for consultations, for dialogue with Russia are particularly important when tensions are high, when we see threats and challenges as we see them. right now (…) It is important that we have these institutions, that we use them and that we speak. (…) These are important efforts to try to make sure that we have a political solution, that we prevent a conflict. We are therefore entering these talks in good faith, ready to discuss options and of course ready to listen to Russia’s concerns, ”the NATO Secretary General said.

As previously reported, in December last year, Russia unveiled plans for the two “agreements” on security guarantees for Russia from the United States and NATO, demanding a waiver of the decision. of the NATO Bucharest summit on the future membership of Ukraine and Georgia, the non-expansion to the east and the reduction of Alliance activity in the former Soviet nations.

Russia, meanwhile, continues to deploy troops in Ukraine’s temporarily occupied territories and around its borders, using these military preparations to blackmail the United States and NATO. If the West refuses to accept such Russian “proposals”, the Kremlin authorities publicly threaten measures of “a military and military-technical nature”.