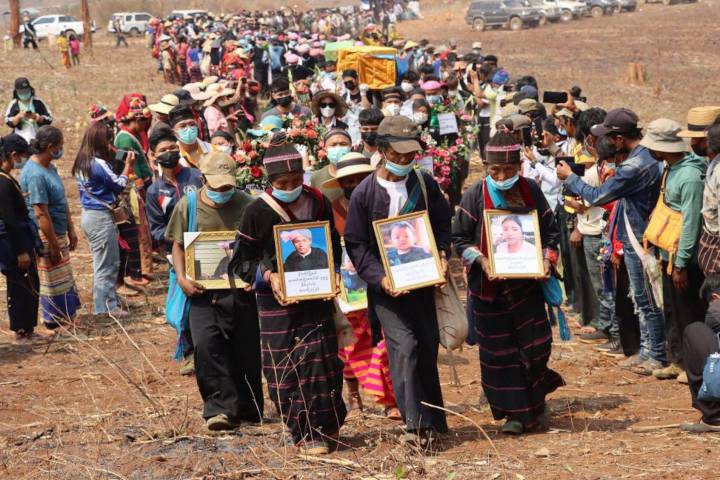 The whole Shan State was shocked by the mass murder of a Ta’ang (Palaung) family including a seven month old child.

As the fire of conflict from ethnic armed groups in Shan State intensifies, civilians fear the mass murder of National Party Chairman Mong Kung Ta’ang (NPT) Mai Noom Han and his family could spark a racial conflict between the Shan and Ta’ang ethnic groups. The two ethnic groups have lived in harmony in the mountainous regions for many years – like brothers and sisters.

The conflict between ethnic armed groups started around 2015-2016 in northern Shan State, and many civilians were killed without knowing the culprits until today.

The killing of Mong Kung Township NPT Chairman Mai Noom Han, his wife and their 7-month-old daughter in Mong Kung was a shocking incident for people in Shan State and Myanmar.

Mai Noom Han and her family disappeared on the morning of January 10, 2022 when they returned from Mat Chee Nok Village to Tong Lao and Pang Lo Villages in Mong Kung Township.

After being missing for two months, on March 9, 2022, the corpses of Mai Noom Han and her family were found in a cave near Pan Pwe sub-village, Tong Lao village, Mong Kung township.

According to Ta’ang CSOs, Mai Noom Han, 39, was found with her hands and neck tied together in an upside down position, and his wife, Lway Aye Kha, 26, was found in a prone position. with her seven month old daughter on her back.

The Shan State Restoration Council (RCSS/SSA) controls the area where the incident took place, and it has been accused that the RCSS/SSA may be the culprit, and should bear the blame. accountability according to Ta’ang CSO voices.

On March 23, 2022, RCSS/SSA issued a statement mentioning that the unilateral accusation is not acceptable and that the incident was intentionally targeted to harm the organization and its political image.

The young Shan and Ta’ang fear that the incident will cause a racial conflict between the two ethnicities.

“Shan and Ta’ang in Mong Kung have lived in harmony for so many years. There is no discrimination – we are all equal in both Shan and Ta’ang. As a resident of Mong Kung, I am saddened by the incident that happened here. It’s not about Shan or Ta’ang – whoever it is, it’s very sad to see such an incident,” Mong Kung resident Sai Merng (not his real name) told SHAN sadly.

It is important that justice be done here. Whoever did this, the culprit should be held accountable and responsible in this case, quoted by the General Secretary of the Ta’ang Women’s Organization (TWO), Lway Poe Ka Mel Choe, “We are all the ethnic groups who live in Shan State and Myanmar as a nation, and we aspire to a federated democratic nation.In order to establish a good system, it is necessary that justice be done and prevail, and that the culprit be held accountable of this incident.

If this case is not solved, it will leave a dark spot and affect the Shan State unit, quoted by a Ta’ang lawyer, Mai Myo Aung, who provides legal assistance to the Ta’ang: “Even if the case is understandable, it will have an impact on the establishment of the future Shan State and the unity of its people. Without accountability and responsibility, this incident will leave a dark mark on the minds of civilians.

Of the three killed, one was a woman and the other was just a few-month-old child, strongly indicating that the safety risk to women and children is threatened according to the Shan Women Action Network ( SWAN).

It was added that all armed groups should obey the laws of the Geneva Conventions and that criminals should be punished accordingly.

“No armed group organization or military institution should be allowed to commit such a crime against anyone – not because of their ethnicity, especially women and children. If so, the criminal should be punished accordingly – he should not be allowed to flee from his crimes. There must be accountability and responsibility,” said the Shan Women Action Network (SWAN).

If armed groups commit crimes against the laws set out in the Geneva Conventions, they can be brought before the International Criminal Court for war crimes.

Myanmar ratified the original four agreements under the Geneva Conventions in 1992 under the government of the State Law and Order Restoration Council (SLORC).

According to the Fourth Geneva Conventions, it is stipulated that (a) crimes against life and person, in particular murder of any kind, mutilation, cruel treatment and torture; (b) hostage taking; (c) outrages upon personal dignity, in particular humiliating and degrading treatment; (d) the pronouncement of sentences and the carrying out of executions without prior judgment pronounced by a regularly constituted court, offering all the judicial guarantees recognized as indispensable by civilized peoples.

Shan CSOs in Shan State issued a statement condemning the act of crimes by anyone or organizations committing such atrocities against civilians without due process. The statement also mentions that the death of Mai Noom Han and her family should be promptly brought to justice.

A case similar to Mai Noom Han occurred in Shan State around May 2016, where six Shan youths disappeared in Nam Kham township along the Nam Phat Kar – Nam Kham road, and the case still unresolved to this day.

Additionally, other cases like an anonymous armed group murdered monks and ward administrators, including the assassination of elected NLD MP U Hitke Zaw in 2020 and many other innocent civilians – these people are still missing until today and the cases are unsolved.

From the statement issued jointly by Shan CSOs, it is stated that armed groups in Shan State should not target ordinary civilians and commit human rights violations, including killings. Otherwise, there will be misunderstanding between the groups and the issue may lead to ethnic and racial conflict in Shan State.

A youth from Mong Kung expressed his view that armed groups should be aware of the situation that could lead to racial conflict: “If some people use this as an advantage to intentionally create racial conflict, the problem will be more important. I don’t want that to happen, and it shouldn’t. I don’t know if there is a political motive behind the current incident; however, there should be no discrimination regarding this case – be it Shan or Ta’ang,” Sai Merng quoted his opinion.

Ta’ang Women’s Organization (TWO) told a press conference that everyone in Shan State expects to live together in harmony and peace without any racial discrimination or conflict. .

“I don’t want people to live in fear – like fearing one ethnic group or the other. To do this, I would like to seek everyone’s cooperation. We have always said that we would like to live in harmony, unity and peace, but this would require everyone’s participation and collaboration,” he was quoted at the press conference.

Due to the armed conflicts in Shan State, countless simple civilian lives have been wasted.

“If people continue to use weapons and abuse their power, there will be no prosperity and educational development in Shan State. If this issue is not discussed and if there is no one to solve this problem, the safety of ordinary civilians like us is hopeless,” a 60-year-old political activist told SHAN.