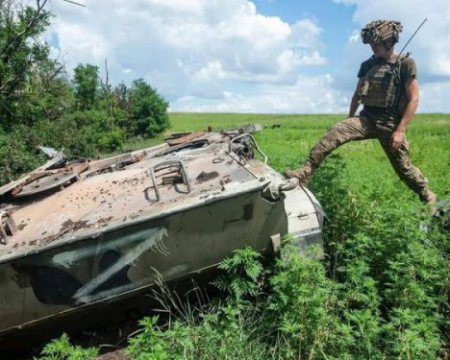 The Ukrainian Armed Forces destroyed two strongholds and two areas of concentration of enemy weapons and equipment in the Novopetrivka and Maksimivka regions.

In Suhomu Stavku, an enemy ammunition supply point was destroyed. Residual losses of the enemy – dorozvidutsya, reports the operational command “Pivden” on Facebook.

READ ALSO: What’s happening at the front: a new map of the fighting in Ukraine on August 15

The enemy tried to carry out assault actions to improve their tactical position in the direction of Novogrigorivka and Biloghirki – 14 air attacks were unsuccessful.

“Continuing to shell populated areas in the rear areas, hitting ‘Uragan’ on Velikiy Kostromtsi and Mykolaiv, and with ‘Pion’ type heavy artillery shelling Marganets. No casualties”, – said in the news.

On combat duty in the Black Sea, two missile launchers with 16 Calibras were left ready. All the others are hiding along the Crimean coast towards Novorossiysk.

The Ukrainian armed forces now maintain fire control on all their transport and logistics arteries in the south. That’s why the Russians can’t carry ammo to his equipment.

After the ZSU attacks on the command posts, the commanders of the Russian troops began to flee rapidly to the left bank of the Dnieper. They don’t want to be cut off from dangerous territory.