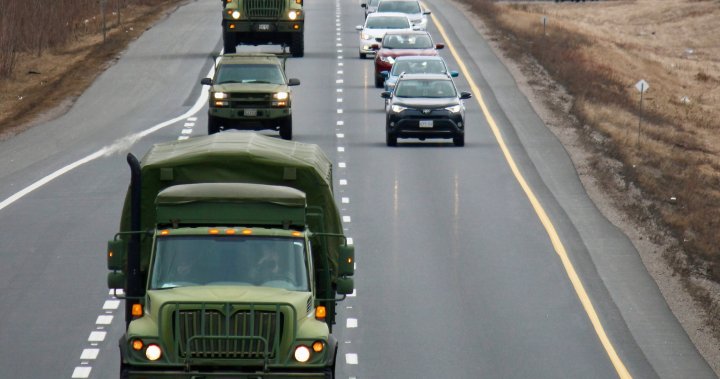 The Canadian Armed Forces says driver training and convoy operations will take place on a number of highways and roads in central Ontario this weekend.

“White Nationalism” a Threat the Canadian Armed Forces Are Unequipped Against: Watchdog

Activities will include convoy drills on planned routes between Windsor, Highway 401 and a number of designated areas. There will also be administrative training for convoys on a planned return road route encompassing Windsor, London, Toronto, Peterborough and Belleville.

Military vehicles can be seen on the following routes (personnel will remain in their vehicles except for maintenance):

“This regular and planned training ensures that our personnel and our combat service support units are ready to respond to missions in Canada, such as floods and forest fires, and to support international stability operations,” said said Lt(N) Andrew J. McLaughlin, public affairs officer for 31 Canadian Brigade Group.

“This important training is conducted to keep the skills of Canadian Army Reserve members current in convoy drills, unit discipline, and the safe and efficient operation of specific vehicle platforms. .

McLaughlin says the public is urged to be extra careful when approaching military vehicles.

“They are thanked in advance for their understanding and cooperation,” he said.