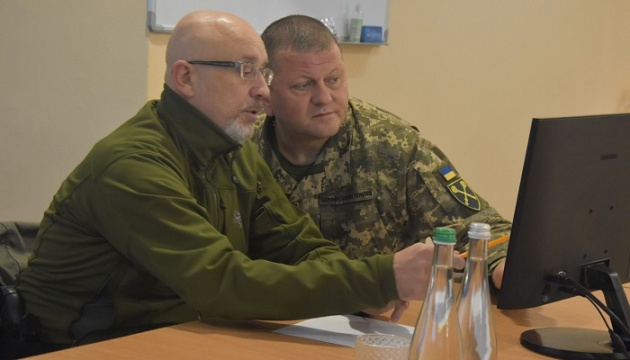 The Armed Forces of Ukraine are absolutely ready to repel the aggressor. Anyone who has looked our soldiers in the eye at least once is convinced that there will be no repeat of 2014, that the aggressor will not take Kiev, Odessa, Kharkiv or any other city.

Such a statement by Ukrainian Defense Minister Oleksii Reznikov and Commander-in-Chief of the Armed Forces of Ukraine Lt. Gen. Valerii Zaluzhnyi was posted on the Defense Ministry website, Ukrinform reports.

“The army and the volunteers managed to stand their ground in 2014 when the ‘brother’ brazenly stabbed him in the back. At that time, many people were not psychologically ready to resist those with whom they sat at the same table yesterday. Now the situation is completely different. The Kremlin is well aware of this, and it is an important deterrent. Today we have the strongest army in Ukraine for 15 years and the strongest army in Europe, our army is led by generals and combat officers. Ilovaisk, Debaltsevo left scars on his heart, but hardened his will. The heroic defense of Donetsk and Luhansk airports, the daily defense of dozens of settlements – from Stanytsia Luhanska to Shyrokyne – made the fighting spirit unbreakable. Anyone who has looked our soldiers in the eye at least once is convinced that there will be no repeat of 2014, that the aggressor will not take Kiev, Odessa, Kharkiv or any other city. Do not doubt, the armed forces are absolutely ready to fight back and will not abandon Ukrainian lands! underlined the Minister of Defense of Ukraine Oleksii Reznikov.

“420,000 Ukrainian soldiers and all commanders without exception have already looked death in the eye. Force commanders, brigade, battalion and company commanders are specialists in their field and patriots of their state. We will not give a single piece of Ukrainian land! added the Commander-in-Chief of the Armed Forces of Ukraine, Lt. Gen. Valerii Zaluzhnyi.

The defense minister, in turn, added that it was not the first time in the last six months that “announcements” of a full-scale Russian invasion had been made, and that they should be considered. as an additional way to smash the enemy’s plans.

Reznikov also noted that today Ukraine enjoys unprecedented support from international partners – the largest since independence. This is manifested in particular by the supply of defensive weapons, which has increased the ability of the Ukrainian Armed Forces to repel the aggressor. During the month, nearly 2,000 tons of modern weapons, ammunition and body armor were received from various countries. Our soldiers have already been trained and are ready to use the full arsenal of tools.

The Defense Minister stressed that the situation is controlled by Ukrainian intelligence services, the army and diplomats.

Ukraine coordinates its actions with the main states of the world 24 hours a day, 7 days a week. Such a union of great democracies has not existed for decades. Many countries now truly understand the threat of Russia’s actions and experience it emotionally. Ukraine experienced this eight years ago.

“No one can look inside the heads of the Kremlin leadership and say for sure what steps could be taken. But we calculate absolutely all scenarios and are ready for them. Today, many statements are being made, and Moscow is even saying that Ukraine is planning to attack Russia. This is absurd. We are not going to attack anyone, but we are doing everything to strengthen the defense and eliminate the possibility of escalation. We plan to follow the politico-diplomatic way. I will tell you more, it is through diplomacy and peace that the regions of Donetsk and Lugansk as well as Crimea and Sevastopol will return home! It is through this path that we now have incredible political and military-technical assistance from our partners, and it is through this path that the Kremlin lifted its shameless blockade of the Sea of ​​Azov. Based on this path, we will seek to unblock the waters of the Black Sea. The powerful army that we are building every day, the Territorial Defense Forces, are our main diplomatic arguments,” added the Ukrainian Defense Minister.

“I assure that the Armed Forces of Ukraine are ready to retaliate. We organize and will organize trainings. The active phase of the staff exercises “Snowstorm-2022” is already underway throughout our country. We are constantly improving our defense capabilities, unit coherence and military skills. We created combat formations and managed to deploy the Territorial Defense Forces in a short time and arm them with ATGMs and MANPADS. We have strengthened the defense of Kiev. We went through the war and received adequate training. Therefore, they are ready to take on enemies not with flowers, but with Stingers, Javelins, and NLAWs. Welcome to hell!” said the Commander-in-Chief of the Ukrainian Armed Forces, Lieutenant General Valerii Zaluzhnyi.

“What to do now? Keep calm, support the armed forces and diplomats. Calm is now the main weapon that can provide us with a solid basis for defense. To continue a normal life, to work is to ensure normal economic activity , and therefore the ability of the Armed Forces to defend the country as much as necessary. Stay calm and do whatever you have to do, so that we all become stronger together,” summed up Oleksii Reznikov.

As reported, the Servant of the People faction said that the deputies are ready to convene the meeting of the Verkhovna Rada at any time to take important decisions to defend the country and strengthen its defense capabilities.

At the same time, the statement highlights that Ukraine now has the most powerful army since 2014 and the largest coalition of partners in our support since independence. The authorities did everything to ensure that pro-Russian forces in Ukraine had the fewest opportunities throughout the independence period, the Servant of the People faction pointed out.