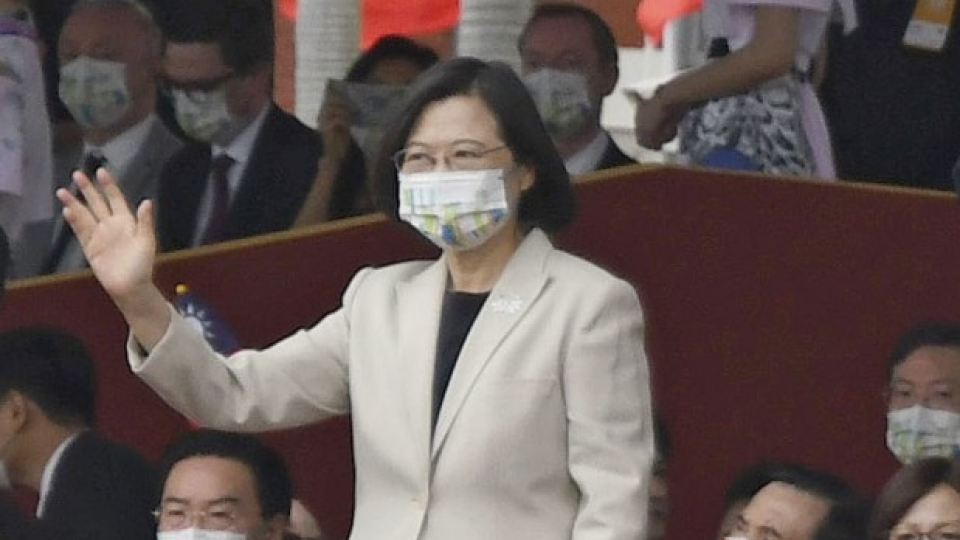 Taiwanese President Tsai Ing-wen said on Monday she was determined to boost the self-governing island’s defense capabilities, but an armed confrontation with China is “definitely not an option” despite escalating tensions in cross-strait relations.

In a speech on the 111th anniversary of the founding of the Republic of China, as Taiwan is called, Tsai said his administration was willing to work with Beijing and needed mutual respect.

Taiwanese President Tsai Ing-wen (top left) salutes during a parade during a ceremony marking the 111th anniversary of the founding of the Republic of China on October 10, 2022 in Taipei. (Kyodo)

His remarks calling for dialogue based on ‘rationality’ and ‘equality’ came as their ties have become even more strained since a high-profile visit to Taiwan by US House Speaker Nany Pelosi in August, and the Chinese military held major exercises in the strait afterwards. .

As the opening of the ruling Chinese Communist Party’s two-decade congress nears Sunday, in which leader Xi Jinping is expected to win an unprecedented third five-year term, Tsai said: “I want make it clear to the authorities in Beijing that arms confrontation is absolutely not an option for our two parties.”

“Only by respecting the commitment of the Taiwanese people to our sovereignty, democracy and freedom can there be a basis for resuming constructive interaction across the Taiwan Strait.”

She also said it was regrettable that Beijing’s recent actions have threatened the status quo of peace and stability in the region.

Although there are divergent views on China in Taiwan, the broadest consensus among the island’s citizens and political parties is that its sovereignty and free and democratic way of life must be defended.

“On this point, we have no room for compromise,” she said, adding that building self-defense capabilities, for example through mass production of precision missiles and warships advanced, is necessary.

China and Taiwan have been governed separately since their separation in 1949 due to a civil war. Beijing sees the Democratic Island as a breakaway province to be reunified by force if necessary.

Xi proposed in 2019 to explore a Taiwanese version of Hong Kong’s “one country, two systems” model. But the independence-minded Taiwanese leader has made it clear that she will not engage in talks on such an idea.

During his Taiwan National Day speech, Tsai used the word “resilience” several times and described the trait as vital to his economic and social future, as well as his security.

“We may have different positions and we may debate with each other, but we must unanimously and resolutely support our free and democratic system no matter what outside pressure we face,” she said.

To make Taiwan more resilient in all kinds of areas in the post-COVID-19 era, she said it must deepen international cooperation and ties with democratic allies.