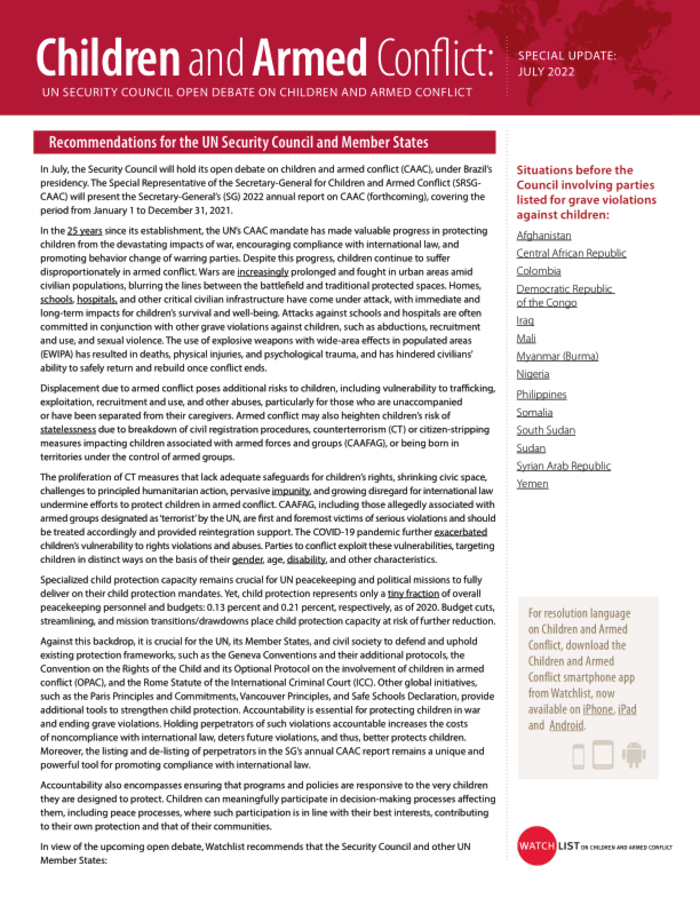 Recommendations to the UN Security Council and Member States

In July, the Security Council will hold its Open Debate on Children and Armed Conflict (CAAC), under the Brazilian presidency. The Special Representative of the Secretary-General for Children and Armed Conflict (SRSGCAAC) will present the 2022 Annual Report of the Secretary-General (SG) on the CAAC (forthcoming), covering the period from 1 January to 31 December 2021.

In the 25 years Since its inception, the UN mandate for the CAAC has made valuable progress in protecting children from the devastating effects of war, encouraging respect for international law and promoting behavioral change among warring parties. Despite this progress, children continue to suffer disproportionately in armed conflict. The wars are more and more prolonged and fought in urban areas amidst civilian populations, blurring the lines between the battlefield and traditional protected spaces. Houses, schools, hospitals, and other critical civilian infrastructure have been attacked, with immediate and long-term impacts for the survival and well-being of children. Attacks on schools and hospitals are often committed in conjunction with other grave violations against children, such as abduction, recruitment and use, and sexual violence. The use of explosive weapons with a wide area of ​​effect in populated areas (EWIPA) has resulted in death, physical injury and psychological trauma, and has hampered the ability of civilians to return safely and rebuild a once the conflict is over.

Displacement due to armed conflict presents additional risks for children, including vulnerability to trafficking, exploitation, recruitment and use, and other abuses, especially for those who are not accompanied or who have been separated from their guardians. Armed conflict can also increase the risk for children of statelessness due to the breakdown of civil status procedures, counter-terrorism measures (CT) or citizen stripping affecting children associated with armed forces and groups (CAAFAG), or born in territories under the control of groups armed.

The proliferation of CT measures that lack adequate safeguards for children’s rights, shrinking civic space, challenges to principled humanitarian action, the pervasiveness impunity, and growing disregard for international law undermine efforts to protect children in armed conflict. CAAFAGs, including those allegedly associated with armed groups designated as “terrorists” by the UN, are first and foremost victims of grave violations and must be treated accordingly and provided with reintegration support. The COVID-19 pandemic further exacerbated children’s vulnerability to rights violations and abuse. Parties to conflict exploit these vulnerabilities, targeting children in distinct ways depending on their genreage, disabilityand other characteristics.

In this context, it is crucial for the United Nations, its Member States and civil society to defend and uphold existing protective frameworks, such as the Geneva Conventions and their additional protocols, the Convention on the Rights of the child and its Optional Protocol on the involvement of children in armed conflict (OPAC) and the Rome Statute of the International Criminal Court (ICC). Other global initiatives, such as the Paris Principles and Commitments, the Vancouver Principles and the Safe Schools Declaration, provide additional tools to strengthen child protection. Accountability is key to protecting children in times of war and ending grave violations. Holding perpetrators of such violations accountable increases the costs of non-compliance with international law, deters future violations and, therefore, better protects children. Moreover, the listing and delisting of authors in the SG’s annual report on the CAAC remains a unique and powerful tool to promote respect for international law.

Accountability also involves ensuring that programs and policies respond to the very children they are meant to protect. Children can participate meaningfully in decision-making processes that affect them, including peace processes, when such participation is in their best interests, contributing to their own protection and that of their communities.

In view of the forthcoming public debate, Watchlist recommends to the Security Council and other UN member states:

a. Strongly condemn all grave violations and abuses against children and encourage the signing and implementation of joint action plans with the UN to end and prevent grave violations; require all parties to act to protect children in accordance with the principles of precaution, distinction and proportionality.

b. Reiterate support for the UN CAAC programme, including the integrity and impartiality of the registration mechanism; request a comprehensive and factual list of authors in the annexes of the SG’s annual reports that accurately reflects data collected and verified by the Monitoring and Reporting Mechanism (MRM); urge the SG to implement a rigorous, objective and transparent process to ensure that parties are listed and delisted in accordance with the 2010 Criteriaconsistently in all national situations.

vs. Urge Member States to bring to justice all those responsible for grave violations against children, including through prompt investigations and, where appropriate, prosecutions for genocide, crimes against humanity, war crimes and other grave crimes against children; encourage cooperation with international judicial mechanisms, including the ICC, and seek dedicated child rights expertise within investigative and justice mechanisms.

D. Encourage Member States that have not yet done so to ratify the OPAC and endorse and implement the Paris Principles and Commitments, the Vancouver Principles and the Safe Schools Declaration; encourage endorsers to exchange lessons learned and best practices.

2. Strengthen the effective use of existing mechanisms and tools to monitor, report and respond to grave violations:

b. Encourage the SG to promptly alert the Security Council whenever there is credible information that parties are committing serious violations by including such “situations of concern” in his annual CAAC report.

vs. Call for effective measures to prevent and respond to attacks and threats of attacks on educational institutions, paying particular attention to inclusive access to education for girls, refugee and internally displaced children and children with disabilities, by SCR 2601 (2021).

D. Call for increased financial and political support for the UN MRM, encouraging systematic analysis of the impact of gender, disability and other vulnerabilities to inform response and prevention efforts; further support efforts to strengthen and improve monitoring and reporting, including the disaggregation of data by sex, age and disability.

e. Demand that all parties to the conflict allow and facilitate unhindered, rapid and safe access to ensure the delivery of humanitarian assistance to affected populations, especially children, and respect and protect humanitarian personnel, assets and infrastructure .

F. Call on the SRSG-CAAC to develop a guidance note on monitoring, reporting, advocacy and dialogue on the denial of humanitarian access to children, in line with existing guidance notes for other grave violations.

3. Prioritize the protection of the rights and well-being of children in armed conflict:

a. Call for increased efforts to mark and clear explosive remnants of war, prioritizing areas where displaced civilians return and children are likely to pass through, and support the adoption of a political declaration committing to avoid using EWIPA.

b. Recalling that CAAFAGs should be treated primarily as victims and that detention should only be used as a last resort, call for the release and rapid transfer of children detained by security forces to civilian child protection authorities; in cases where children may have committed violent criminal acts, ensure that they are treated in accordance with international juvenile justice standards; urge donors to provide predictable, long-term funding for the reintegration of CAAFAGs.

vs. To prevent the military detention of children, call for the adoption and effective implementation of transfer protocols that ensure the prompt transfer of children to civilian child protection authorities, as well as access to detention centers for the UN and other independent monitors.

D. Call for the protection, rights, well-being and empowerment of war-affected children to be fully integrated and prioritized in ongoing and future efforts to build and sustain peace, through SCR 2427 (2018); encourage and facilitate the inclusion of children’s views in these processes, where possible and consistent with their best interests, building on existing tools, including the Practical advice for mediators to protect children in situations of armed conflict.