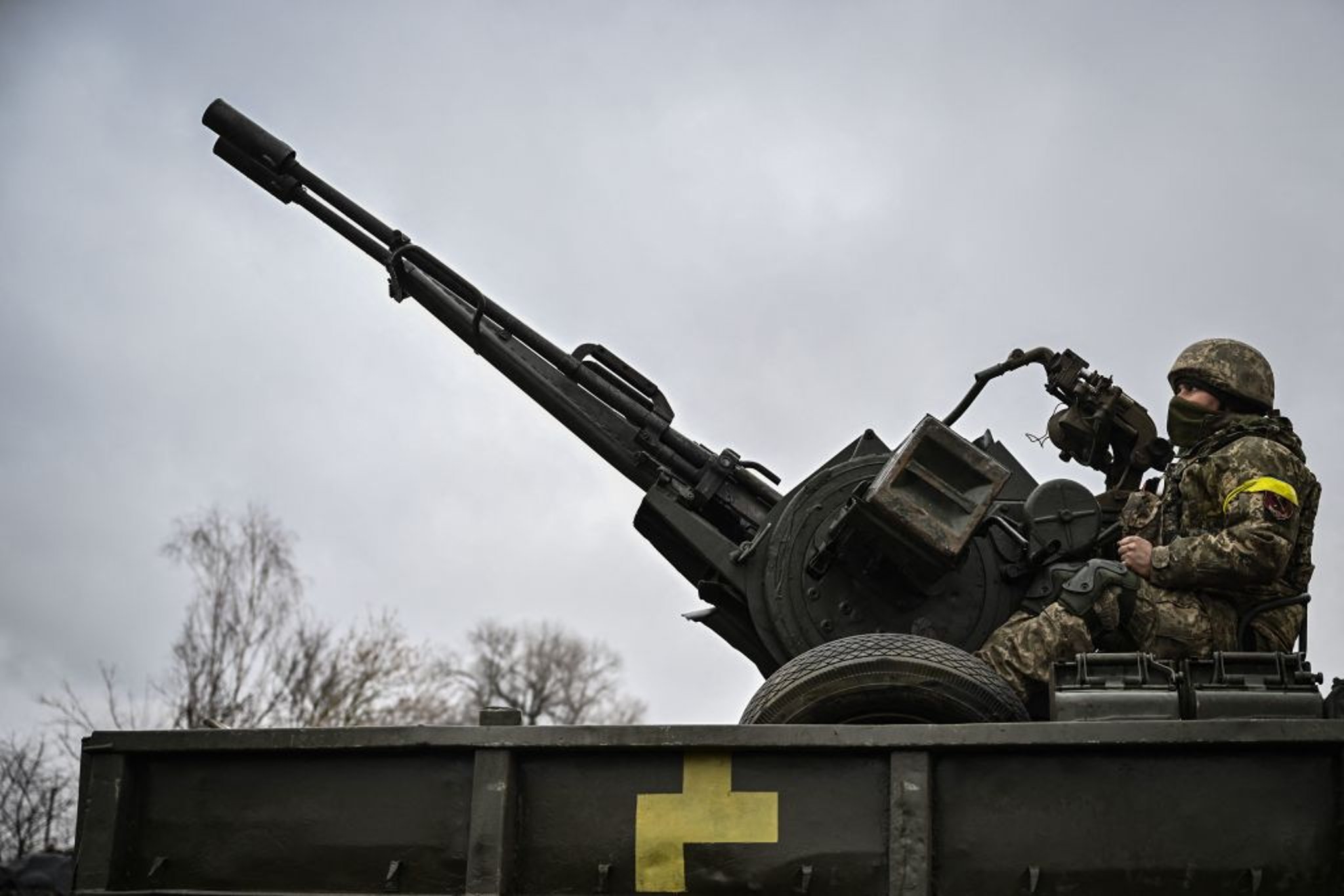 Register to our NationalWorld Today newsletter

The newsletter mute the noise

Despite significant military power, Russian forces were unable to overthrow the government of Ukrainian President Volodymyr Zelensky and reportedly failed in their other military objectives.

So how much military power does Ukraine have – and how does it compare to the Russian war machine?

Ukrainian troops are outnumbered by more than two to one against the Russians (Image: AFP/Getty Images)

How big is the Ukrainian army?

According to the International Institute for Strategic Studies (IISS), Ukraine has 196,600 active military personnel.

It can also count on 900,000 reservists although, as recent images of civilians holding wooden rifles suggest, not all of these forces are necessarily well equipped.

President Zelensky said on Saturday March 12 that the number of Ukrainian soldiers who died during the conflict was around 1,300 – although it is difficult to verify this claim.

Although it did not provide estimates of the number of Ukrainian soldiers it killed, Russia claims to have destroyed 3,687 Ukrainian military sites.

This figure does not include the missile attack on the Ukrainian military base in Yavoriv, ​​just 10 km from the Polish border, in which at least 35 people were killed, some of whom may be foreign fighters.

Russia also claims to have shot down 99 Ukrainian planes, 1,194 tanks and armored vehicles and 443 artillery guns since the start of the invasion, according to the Interfax news agency.

Again, these claims have not been verified.

The Ukrainian government has sought to bolster its workforce with civilians by preventing men between the ages of 18 and 60 from leaving the country, giving all citizens the right to legally bear arms, offering them weapons and encouraging people making Molotov cocktails.

Most of Ukraine’s firepower is ground-based, with the country having over 2,000 tanks, 1,960 artillery pieces and 2,870 armored vehicles before the Russian invasion.

Fighting has been concentrated in northern, southern and eastern Ukraine (graphic: Mark Hall)

More such aid is believed to have been delivered in recent weeks.

Poland is believed to be looking for ways to give its neighbor all of its MiG-29 aircraft to boost its strike aircraft capabilities.

It remains the only country in the world to have given up its nuclear weapons, meaning it has no deterrent to threaten Russia.

Given that the country has been fighting so-called Russian-backed separatists in the east of the country since 2014, its armed forces are familiar with the fight.

However, with a defense budget of between $2 billion and $5 billion, it lacks the capabilities of its powerful neighbour.

How big is the Russian army?

The Russian army greatly exceeds that of Ukraine, with a budget of between 40 and 65 billion dollars and 900,000 active soldiers on land, sea and air.

The country also has about two million reservists, and that number could be boosted as Russia debates whether to enlist more people in its armed forces.

Russia often showcases its military force publicly with parades, like this one marking Victory Day in 2021 (Image: AFP/Getty Images)

In an interview with BBC Radio 4, Professor Michael Clarke – security expert and former director of the Royal United Services Institute – estimated that 40% of the active Russian army was made up of conscripts.

Russian men between the ages of 18 and 27 are forced to serve for a period of 12 months each year.

The next draft will take place on April 1.

Ukraine claims to have killed more than 12,000 Russian servicemen (about 6% of its active Ukrainian invasion force), although military experts estimate the figure to be closer to 10,000.

The victims are thought to include four high-ranking Russian generals – potentially a fifth of Russia’s military leadership in Ukraine.

It is believed that they were forced to move to more forward positions due to a breakdown in communications with front line troops.

Russia only officially admitted to losing 498 troops, with 1,597 wounded – although that figure was given on March 2.

Russia’s ground capabilities include more than 13,000 tanks, just under 6,000 artillery pieces and almost 20,000 armored vehicles – although not all of that firepower is being thrown at Ukraine.

Ukraine claims to have destroyed 860 pieces of key equipment, including 362 tanks and 135 artillery pieces.

Missile strikes have become more common in western and central Ukraine over the past week.

Russia has a navy that includes more than 50 submarines (Image: AFP/Getty Images)

As for aircraft, the country has 1,328 attack aircraft and more than 470 attack helicopters.

Ukraine claims to have destroyed or captured 58 aircraft, including troop carriers, and 83 helicopters.

At sea, its 74 warships and 51 submarines dwarf Ukraine’s small fleet – although they are unlikely to be effective given that Ukraine lost much of its coastal territory when Russia annexed Crimea in 2014.

But while having a large army with advanced equipment is all well and good, it means nothing without battlefield experience.

Russia has had many over the past decade due to its involvement in the civil war in Syria, where it supported Bashar al-Assad’s regime.

It has also sent forces to Libya and, more recently, Kazakhstan, which means its war machine has plenty of recent combat experience.

However, that experiment is believed to have been undermined by logistical problems, poor lines of communication and his underestimation of Ukrainian forces, according to Western politicians and independent military experts.

Professor Michael Clarke told the BBC there was also ‘deep corruption’ within the Russian ranks and said the fact that most of the military believed they were on exercise as the war approached The invasion meant she wasn’t ready for a fight.

“When they exercise they accept all kinds of things that aren’t really true – they tick the boxes for maintenance that [isn’t] really there and they sell their equipment because they are paid so little. And so the forces that crossed the border, in fact, are extremely ill-prepared,” he said.

It is believed that it took over 10 days for the convoy to reach these positions as it lacked fuel for its 230 tanks, food for its 15,000 soldiers and was subject to frequent Ukrainian attacks.

Russia’s greatest threat to Ukraine and the rest of the world is its stockpile of nuclear weapons, the mere existence of which acts as a deterrent to directly engaging in war with the country.

How big is Britain’s armed forces?

According to the latest publicly available assessment from the Ministry of Defense (MoD), the full-time UK Armed Forces consist of over 159,000 personnel.

Some of these troops are currently deployed with NATO in Eastern Europe and the Baltic states, fearing that Russia is planning to invade its other neighbors.

The UK has troops deployed with NATO in the Baltic states (Image: PA)

At present, over 32,000 reservists are available to supplement the active British personnel.

How big is the US military?

Few countries can match the power or technology of the American military machine.

According to the latest 2020 estimates, the country spends north of $700 billion a year on its armed forces.

In 2020, this represented 37% of the entire global defense budget.

It is believed that there are over a million active ground troops, over 300,000 navy personnel and over 300,000 air troops.

How big is NATO’s army?

NATO’s defense organization has about 3.5 million active and reservists that it can call on if one of its members is attacked.

A message from the editor:

Thanks for the reading. NationalWorld is a new national news brand, produced by a team of journalists, editors, video producers and designers who live and work across the UK. Learn more about who is who in the team, and our editorial values. We want to create a community among our readers, so follow us on Facebook, Twitter and instagram, and continue the conversation. You can also subscribe to our email newsletters and get a selection of our best reads delivered to your inbox every day.