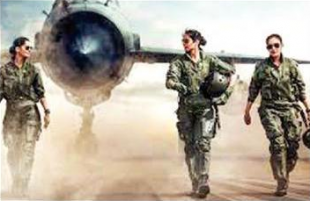 Role of women in the armed forces

The Indian Army, Air Force and Navy began inducting women as short-term commission officers in 1992. It was the first time that women were allowed to join the army outside of the medical sector. One of the turning points for women in the military came in 2015 when the Indian Air Force decided to induct them into the fighter stream. In 2020, the Supreme Court ordered the central government to grant a permanent commission to female officers of the army’s non-combat support units on an equal basis with their male counterparts. In March 2021, the Indian Navy deployed 4 female officers to naval vessels after a hiatus of 23 years and 2 months later in May 2021, the Indian Army got its first batch of 83 female soldiers in the Military Police. By 2022, women will also be able to join the National Defense Academy’s (NDA) first tri-service training institute.

Women and girls constitute half of the world’s population and they certainly constitute half of the global potential that should be tapped if we intend to achieve the Sustainable Development Goals by 2030. India has already done that giant leap in 1992. when he began inducting female officers into the Indian Defense Force. Since the appointment of the first female short-term officer in 1993, we have come a long way. It’s no longer about equality or what they can and can’t do, a lot of water has flowed under the bridge, we’ve come a long way. Since then female officers started to be commissioned at the Officers Training Academy (OTA) in Chennai or now Gaya are trained for 11 months. They have different criteria or eligibility criteria to join different streams i.e. different services and regiments. There are combat arms, combat support arms, and services. They were not allowed to join combat arms like infantry, armored core, mechanized infantry, artillery and air defense. But they were allowed to join combat support arms like signals, engineers, aviation and services like EME, CSA, Ordnance, Intelligence, Judge Advocates General and branches educational. They were allowed to join as short-term officers, serve for 10 years, then have a 4-year extension, but there was no selection for the permanent commission, the permanent commission n was only in the medical and dental branches.

In 2020, the Supreme Court, while hearing a batch of motions, allowed them to be considered for a standing commission and they are now under consideration. At present, the army has nearly 1750 female officers and among them, 230 odd females are now in the permanent stream. This means that they will retire at the same age as the men and are now allowed to command their units in the stream.

Last year, the Department of Defense informed the Supreme Court that it would allow women to join the NDA, which is a huge step forward. There has been a lot of effort over the last few years, in fact the last crucial steps have been very important, whether it is the intervention of the Supreme Court or the decisions that have been taken by the government in place and we are almost there to a level now that this evolution is coming full circle. The army is an organization which is supposed to find solutions to a crisis which could take place or which could not take place and this crisis is a war therefore directly concerned with the security of the nation. If female officers or female cadets are inducted into the military, there should be workshops or awareness programs for other male officers, commanders or those they work with so that they get a general idea of ​​the gender diversity so that they are also mentally prepared for change.

Also, another great significance is that last year, the Ministry of Defense decided to allow feeder institutions RIMC (Rashtriya Indian Military College) and RMS (Rashtriya Military Schools) to induct girls, thus bringing parity between the sexes. The implications of this decision would be seen 10 to 15 years from now as these girls mature and grow in these nurturing institutions to pass NDA exams. Nurturing institutions play a very important role and are part of this evolutionary process.

The number of female candidates deemed fit for induction is far less for some reason than the male officers hopefully that will change when they start coming from Sainik schools and RIMC which is the importance of these nurturing institutions . This decision to induct female cadets into Sainik School will make the biggest difference but in fact the first batch has already started in 2018 at Captain Manoj Pandey Sainik Lucknow School with 15 girls.

It is very important that there is no compromise on the appearance when it comes to operating standards, induction standards and there is no comparison between men and women. This change will manifest itself on the ground in these nurturing institutions.

(The author is a lawyer by profession)