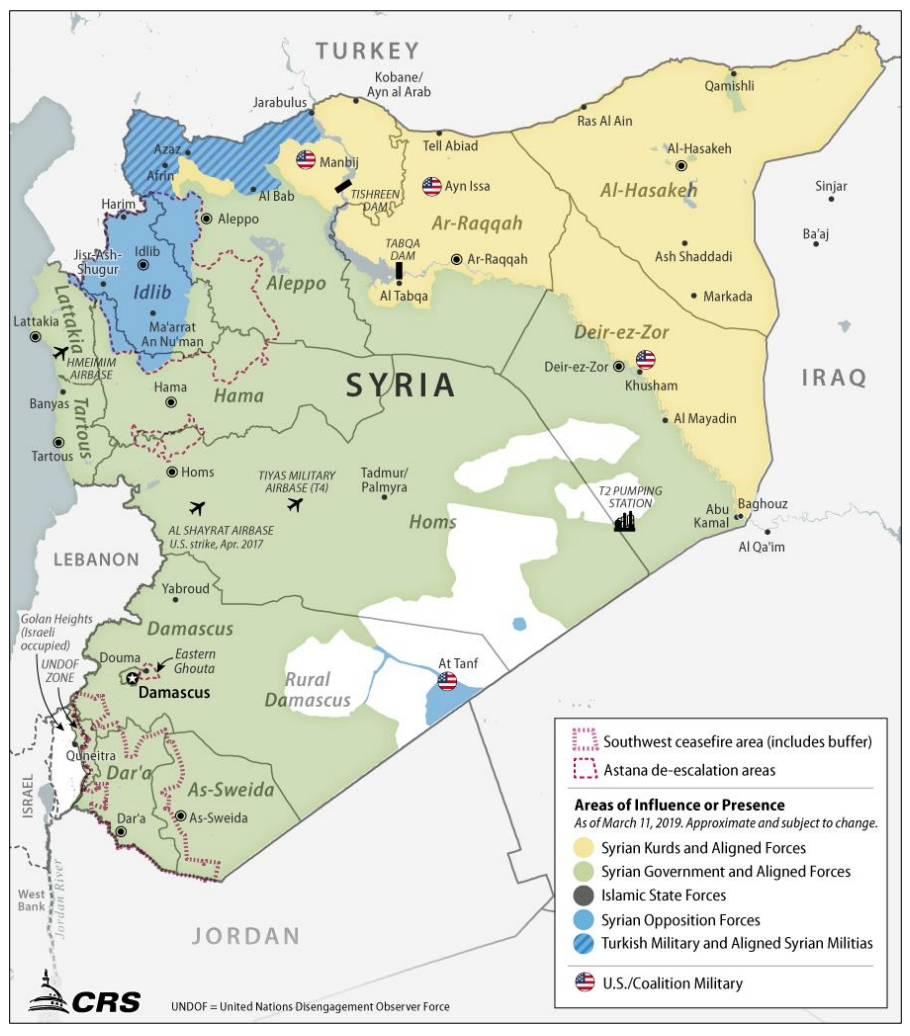 The following is March 25, 2019 Congressional Research Service Armed Conflict in Syria: Overview and US Response.

Since 2011, the conflict in Syria has presented significant political challenges for the United States. U.S. policy toward Syria since 2014 has prioritized counterterrorism operations against the Islamic State (ISIS, also known as ISIL / ISIS), but has also included non-lethal assistance to Syrian opposition groups, diplomatic efforts to achieve a political settlement of the civil and humanitarian war. aid to Syria and the countries of the region affected by the exodus of refugees. US forces deployed in Syria trained, equipped and advised local partners under special authorization from Congress and worked primarily “through, with and through” these local partners to recapture nearly all areas formerly held by Islamic State.

Following an internal policy review, administration officials at the end of 2018 described US policy toward Syria as seeking (1) the lasting defeat of the Islamic State; (2) a political settlement of the Syrian civil war; and (3) the withdrawal of Iranian-commanded forces. President Trump’s announcement in December 2018 that American forces had defeated Islamic State and would leave Syria seemed to mark the start of a new American approach. However, in February 2019, the White House declared that several hundred US troops would remain in Syria, and the president is requesting $ 300 million in defense funding for fiscal 2020 to continue to equip and support partner Syrian forces. . The 2019 National Defense Authorization Law (PL 115-232) required the administration to clarify its strategy in Syria and report on ongoing programs in order to compel defense funds of the 2019 exercise for training and equipment in Syria.

The United States continues to advocate for a negotiated settlement between the government of Syrian President Bashar al Asad and the Syrian opposition forces in accordance with UN Security Council resolution 2254 (which calls for the drafting of ‘a new constitution and UN supervised elections). However, the use of force by the Assad government to retake most of the opposition-held areas of Syria reduced the pressure on Damascus to negotiate, and US intelligence officials in 2019 judged Assad to be weak. urged to make significant concessions to the opposition. U.S. officials have said the United States will not contribute reconstruction aid to areas controlled by Assad unless a political solution is found.

The United States has spent more than $ 9.1 billion in humanitarian assistance related to Syria, and Congress has allocated billions more for security and stabilization initiatives in Syria and neighboring countries. The Defense Ministry did not break down the costs of military operations in Syria against the overall cost of the anti-ISIS campaign in Syria and Iraq (known as Operation Inherent Resolve, OIR), which had reached 28, $ 5 billion in September 2018.

The 115th Congress considered proposals to allow or restrict the use of force against Islamic State and in response to the Syrian government’s chemical weapons attacks, but did not promulgate any specific use of force authorizations for the Islamic State. Syria. The 116th Congress may seek clarification from the administration regarding its overall policy in Syria, plans for the withdrawal of US military forces, the role of the United States in securing a lasting defeat for the Islamic State, US investments and approaches conflict stabilization plans, the future of Syria’s refugees and American partners inside Syria, and the challenges of dealing with Assad’s government aligned with Iran and Russia.