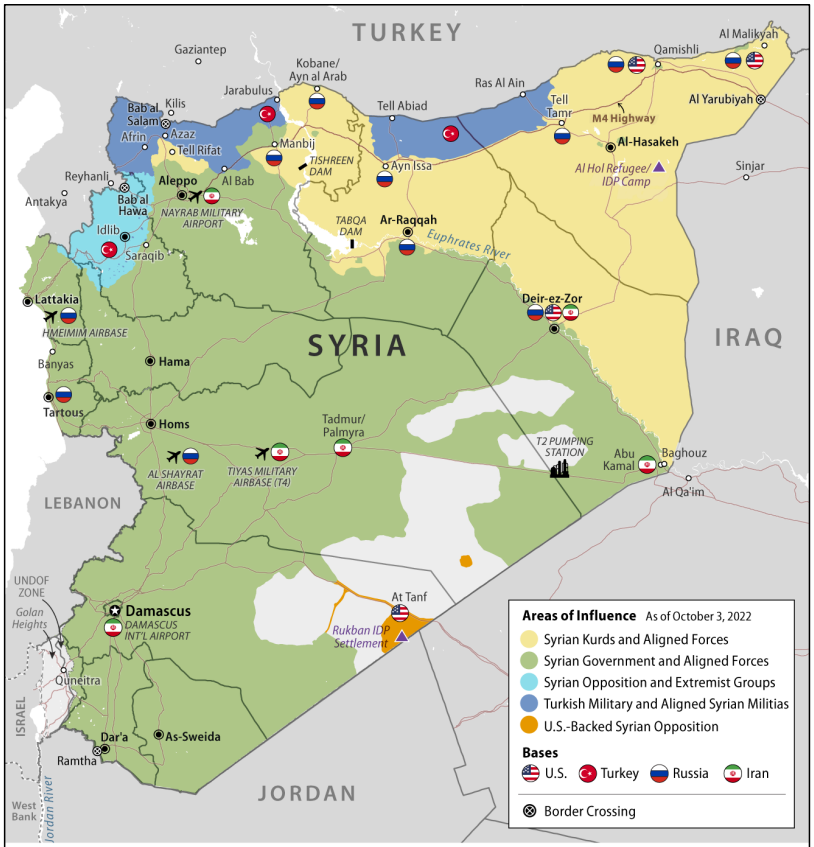 The following is the Congressional Research Service report from November 8, 2020, Armed Conflict in Syria: Overview and US Response.

In March 2022, the Syrian conflict marked its 11th year. Analysts estimate that the conflict has killed more than half a million people (combatants included) and displaced half of Syria’s pre-war population. Challenges for U.S. policymakers in Syria include countering Al-Qaeda-linked groups, responding to the threat posed by Islamic State (ISIS/ISIS) remnants and detainees, facilitating humanitarian assistance and the management of Russian and Iranian challenges to US operations.

Conflict Status. In early 2022, the United Nations (UN) special envoy for Syria, Geir Pedersen, described the conflict in Syria – between the Syrian government and its partners on the one hand and various opposition groups and extremists on the other. – as a “stalemate”, noting that “militarily, the front lines remain unchanged.” Pedersen said “any of a number of flashpoints could ignite a larger conflagration.” In 2022, the new commander of the United States Central Command (CENTCOM), General Michael Kurilla, said that the Assad government is “positioned to militarily end the civil war”, but noted that the underlying conditions root causes of conflict (including political disenfranchisement, poverty, water scarcity and economic instability) would likely persist.

Islamic State. Despite the territorial defeat in Syria of the Islamic State (IS, also known as ISIS, ISIL, or the Arabic acronym Daesh) in 2019 by US-backed Kurdish-led forces (known as known as the Syrian Democratic Forces, or SDF), IS fighters continue to operate as an insurgency. The SDF is holding around 10,000 IS detainees – whom CENTCOM officials have described as “an army of IS on standby” – in detention centers described as “overcrowded ad hoc structures that have not been built to house inmates”. In January 2022, US air and ground forces in Syria joined Kurdish partner forces in a protracted battle to retake a prison seized by IS fighters, reigniting concern among policymakers over the safety of detainees. from IS held by the SDF.

External actors. Five countries operate or maintain military forces in Syria: Russia, Turkey, Iran, Israel and the United States. US and Russian forces operate in close proximity in northern Syria and maintain a deconfliction channel to avoid inadvertent conflict between the respective forces. Turkey also maintains forces in northern Syria, sometimes targeting Kurdish elements of the SDF forces whom the Turkish government considers terrorists. Israel is reportedly carrying out regular airstrikes inside Syria on Iranian, Syrian and Hezbollah targets that the Israeli government considers threats to its security.

Humanitarian situation. According to the United Nations Humanitarian Needs Overview for Syria in 2022, 14.6 million people are in need of humanitarian assistance, an increase of 1.2 million from 2021. In 2014, the Security Council authorized the delivery of cross-border humanitarian aid into Syria through four approved crossing points; subsequent Russian vetoes have since reduced the UN clearance to a single pass. In July 2022, the UN Security Council renewed its authorization for cross-border assistance to Syria for a period of 6 months, following a Russian veto of a 12-month extension. The new resolution is due to expire on January 10, 2023.

American politics. Biden administration officials have said the United States is seeking a political settlement to the conflict in Syria in accordance with United Nations Security Council resolution 2254 (2015). US policy priorities in Syria include (1) defeating the Islamic State and al-Qaeda; (2) increase access to humanitarian aid; (3) reduce violence by maintaining local ceasefires; and (4) promote accountability for atrocities committed during the conflict.

American military presence. About 900 US troops are operating in Syria to support counter-ISIS operations led by local partner forces, as part of Operation Inherent Resolve (OIR). US forces in Syria continue to face threats from Iran-backed militias, which have targeted US positions in the country.

Political debates. Policy makers face a number of, sometimes competing, policy priorities in Syria. The Islamic State seeks to exploit deteriorating economic conditions in the country; however, projects aimed at boosting economic activity in Syria may have the unintended effect of helping the Assad government. Similarly, policymakers disagree on whether the benefits of efforts to ease economic conditions in neighboring Lebanon outweigh the risk that those efforts could benefit Assad. Policymakers also face the added complications of regional states, including US allies, pursuing their own agendas in Syria, whether in the form of military operations or efforts to normalize diplomatic relations with the Assad government.