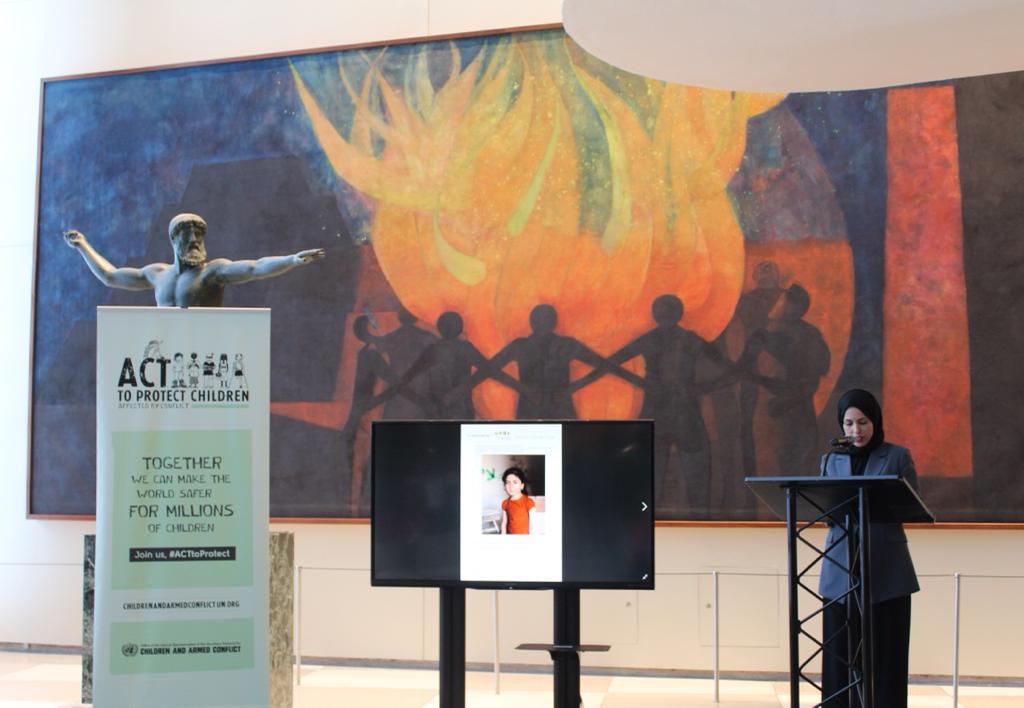 Permanent Representative of Qatar to the United Nations HE Sheikha Alya Ahmed Saif Al Thani addressing the inauguration of the photo exhibition.

New York: On the occasion of the 25th anniversary of the establishment of the mandate of the Special Representative of the Secretary-General of the United Nations for Children and Armed Conflict, the State of Qatar sponsored a photo exhibition on children and conflict Armed Forces under the title “From Despair to Hope: Children Beyond Armed Conflict”, organized at the United Nations Headquarters in New York, with the Permanent Missions of Kazakhstan, Malta, Iraq, Norway , France and the United Kingdom.

The exhibition included a collection of photographs of children from Iraq, Syria, Gaza, Darfur, South Sudan, the Democratic Republic of Congo and other places of conflict, by British photojournalist Paddy Dowling. Sheikha Alya said these photos remind us that children are the most vulnerable in conflict situations and that their lives often reflect the collateral damage of war and instability.

She stressed that one of Qatar’s priorities was to protect children from the devastating effects of the conflict, as well as to protect education from attack. She said she was happy to host the Center for the Promotion and Protection of Children Affected by Armed Conflict of the Office of the Special Representative of the Secretary-General for Children and Armed Conflict in Doha.

She explained that the center aims to build knowledge and skills related to the protection of children affected by armed conflict in the region. It also encourages the collection of information and the strengthening of international cooperation to end and prevent violations against children in armed conflict.

The Special Representative of the Secretary-General for Children and Armed Conflict said the exhibit offered a special opportunity to reflect on the complexity of the lives of children living in the midst of conflict, adding that pictures of children are beautiful and tragedies and show the cruelty of war still show that these children still hope for a better future.

She also expressed her belief that the contribution of the State of Qatar to this event contributes to ensuring a better understanding of the reality of children affected by the conflict.

For his part, photojournalist Paddy Dowling praised Qatar and its charities for supporting children affected by the armed conflict.

In a video speech, he said: “I thank from the bottom of my heart my humanitarian colleagues in the State of Qatar, in particular the Qatar Fund for Development, Education Above All and Qatar Charity for their tireless support to those in desperate need. of help around us. the world.”