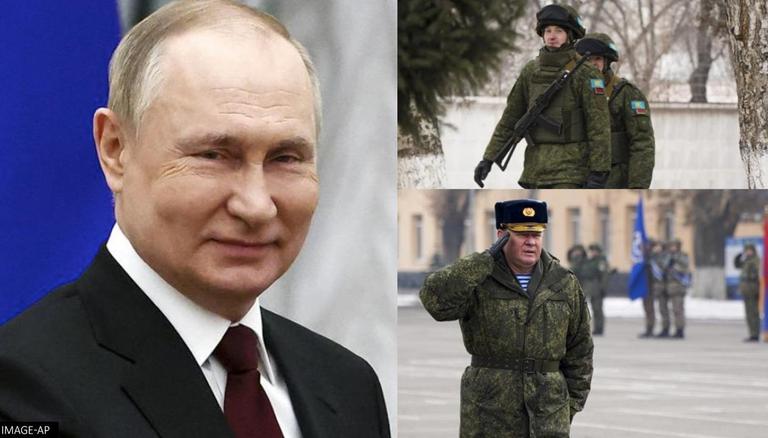 Russian President Vladimir Putin on Wednesday defiantly sent a message to the West, the United States and NATO allies that his own country’s interests were ‘non-negotiable’, while agreeing to hold a dialogue diplomacy on the issue of Ukrainian sovereignty. Addressing his nation on Defender of the Fatherland Day or Armed Forces Day, Putin hailed the heroism of his soldiers and recognized the courage of his military forces, calling them “noble defenders, our pride”.

“Please accept my warmest greetings on this public holiday, Defender of the Fatherland Day,” Russian leader Putin told veterans, military and civilian personnel of the armed forces and civilians in his country.

“I thank you for your faithful and honest service to our motherland,” Russian leader Vladimir Putin said, addressing the country on Defender of the Fatherland Day.

“I have confidence in you, Russian soldiers and officers, in your professionalism, bravery and reliability, that you will protect our people and defend the national interests of our great country.”

Putin also noted Russia’s deep-rooted tradition of patriotism and recognized the “heroic merits” of those who served or are currently serving in the Russian army, air force and navy, for affirming the national interests, sovereignty and independence of Russia.

“The patriotism and unity of our nation, the exploits of its devoted sons and daughters have always been the basis of our thousand-year-old country’s martial history, its glory and its victories,” Putin said in his address. to the nation.

He hailed “the Russian guards of Alexander Nevsky and Dmitri Donskoy, the warriors of Minin and Pozharsky and the heroes of Poltava and Borodino, Stalingrad and the unstoppable assault on Berlin, all those who brought glory to our fatherland according to the great traditions of our ancestors.”

“We are proud of the many generations of its defenders,” Russian leader Putin said as he glorified the personnel of his armed forces and their contributions to safeguarding Russia’s national interests. “We have heartfelt and heartfelt words of gratitude for veterans of the Great Patriotic War,” he said, adding that Russia will remember the valiant generation of victors. [soldiers]who crushed Nazism and saved Russia and the whole world from a barbaric and ruthless force.

Putin claimed it was his responsibility to ensure his nation could defend itself – ‘a primary responsibility of the government’, the armed forces, which serve Russian soil as a reliable guarantee of its national security, ensure life orderly civilians against external threats and maintain Russia’s stability. and steady development. “We can see the difficult international situation and the threats posed by current challenges, such as the erosion of the arms control system and the military activities of NATO,” Putin said. But Russia, he said, continues to call for building a system that maintains equal and indivisible security for all nations, and reliably defends all countries. But these calls from Russia, he stressed, “remain unanswered”.

While acknowledging that Moscow is ready to come to the negotiating table for a diplomatic resolution of the “most complicated” geopolitical concerns, he affirmed that “Russia’s interests and national security are an indisputable priority”.

“We will continue to strengthen and modernize our army and navy, striving to increase their efficiency, so that they are equipped with the most advanced equipment,” Putin said. “We have weapons that are unrivaled in the world and they are operational,” the Russian leader said in threatening rhetoric directed at outside forces.

Russia has carried out several years of modernization of its armed forces, Putin warned, adding that its soldiers have gained mobility and gained new combat experience during operations in different democracies around the world. During the operation in Syria, the Russian leader said, his soldiers demonstrated their ability to perform “the most difficult tasks”. Moscow, he said, will continue to develop advanced weapon systems, hypersonic weapons and will continue to expand the use of advanced digital technology and elements of artificial intelligence. This will multiply the potential of the Russian armed forces many times over, he said.