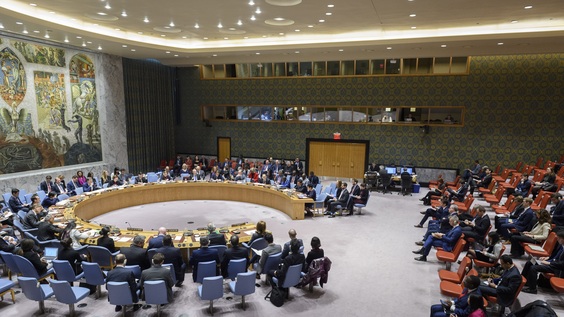 With civilians accounting for nearly 90% of casualties in wartime and humanitarian workers threatened with arrest for providing aid to “the enemy”, the Security Council simply needs to do more to ensure protecting innocent people caught in the midst of raging conflicts around the world, experts in the field told the 15-nation body today, as more than 70 delegates denounced its inaction and explored ways to appease the suffering during the one-day debate.

Describing the grim reality, Ramesh Rajasingham, director of the Office for the Coordination of Humanitarian Affairs, one of four experts briefing the Council, said the war in Ukraine and other conflicts had pushed the number of people fleeing to more than 100 million for the first time. checked in. In Afghanistan, attacks on health facilities have affected access for 300,000 people, while in Yemen only half of health facilities are functioning. At the end of 2021, conflicts led to acute food insecurity for 140 million people in 24 countries.

Globally, food, fuel and fertilizer prices are skyrocketing, he said, with a 30% rise in food prices alone threatening people in Africa and the Middle -East. He urged states and non-state armed groups to monitor reports of civilian damage, assess the impact of military operations, and change course if necessary.

Picking up on this thread, Robert Mardini, Director General of the International Committee of the Red Cross (ICRC), described the appalling human cost of the use of long-range explosive weapons in urban areas: countless people killed, homes destroyed, hospitals overwhelmed with complex injuries and survivors left with permanent disabilities. “This clearly raises serious questions about how parties to such conflicts interpret and apply the relevant rules of international humanitarian law,” he said.

He urged the Council to ensure that the protection of civilians is a strategic priority in the planning and conduct of all military and security operations in these areas, including by leveraging its influence with allies, partners and agents to promote compliance with the law.

In equal measure, David Miliband, president of the International Rescue Committee, said the demand among his organization’s 30,000 employees is not for the creation of new rights or new laws. “It is up to this body to keep the commitments it has made,” he stressed. The diplomatic, political, legal and humanitarian system for the protection of civilians is failing.

Every year, the delivery of aid becomes more difficult, not because the natural geography is more difficult, but because man-made obstacles have become greater, he pointed out. While the Council is not responsible for those who target civilians or aid workers, it is responsible for not holding them accountable. He called for a “new muscle” in the drive to prevent the strangulation and militarization of aid.

Rachel Boketa, Democratic Republic of Congo country director at Women for Women International, said to better protect all civilians, local women’s groups must be part of the strategy “from the start”. She called for closer coordination between humanitarian country teams, governments, the United Nations Organization Stabilization Mission in the Democratic Republic of the Congo (MONUSCO) and civil society throughout the planning and implementation of the humanitarian response.

Community-based organizations centered on women are the first on the front line to provide women with immediate support, she said, noting that women’s lives do not neatly fall into buckets of “sectors”, “agendas” or “frames”. Governments must think and act holistically, locally and transformatively to meet women where they are.

In the ensuing discussion, delegates from around the world stressed the importance of respecting international humanitarian law. Many condemned the use of wide-area explosive devices in urban settings, with Austria calling for a strong political statement. “It is high time to adopt it,” he insisted.

Several have taken the Council to task. The Kenyan representative said the nature and extent of protracted wars meant that the Council – which lacked the will to resolve them – now spent much of its time deliberating on humanitarian issues. “Our multilateral tools are collapsing under the weight of weak political will,” he said, adding: “The piecemeal approaches of this Council will only lead to failure and mass murder many thousands of others”.

Also calling on the Council to honor its commitments, the representative of Yemen pointed to Iran’s supply of ballistic missiles to the Houthis, in violation of resolutions 2216 (2015) and 2231 (2015), stressing: “The international community must to act. “We need real accountability here.”

Many delegates – including from Ireland, Norway, China, Algeria and Egypt – stressed the importance of respecting the Council’s own resolutions on the protection of medical personnel, schools, missing persons and civilian infrastructure, which, when combined with ensuring unhindered access for humanitarian workers, would improve the lot of civilians.

In the absence of action by the Council, the representative of Ecuador highlighted resolution ES 11/2, in which the General Assembly called on all parties to protect civilians, including foreign citizens, by especially students, without preconditions.

Several have described the utter inhumanity of conditions in Ukraine. The representative of the United States, President of the Council for the month of May, stressed in her national capacity that the Russian Federation will be held responsible for the reported use of mass graves, executions and torture.

Also calling for accountability, the Estonian representative, pointing to Moscow’s massive bombardment of Ukrainian cities and massive disinformation – including within the Council – said the aggression was being carried out with “cynical indifference” to with regard to the protection of civilians.

The delegate from Ukraine described these actions as part of the “Nazi-style war strategy” of the Russian Federation. However, these atrocities are committed by individuals, he said, recalling that a Ukrainian court recently convicted a Russian soldier for the murder of an unarmed civilian.

In turn, the delegate of the Russian Federation, noting that his country was involved in the creation of contemporary international humanitarian law and the code of conduct for warring parties, said that its special military operation fully adheres to the objective of protection of civilians taken hostage by the Kyiv regime. .

Others highlighted their country’s contributions to the humanitarian response. The delegate from Qatar, noting that her country was among the top 10 contributors, said that it provided $18 million to the Central Emergency Relief Fund, regularly assisted the United Nations Relief and Works Agency for Palestine Refugees in the Near East (UNRWA) and offered direct assistance to Afghanistan, in particular to rehabilitate Kabul airport.

Still others have focused on including protection of civilians mandates in peacekeeping operations. In this context, the delegate from Nepal said that the mandate should be treated as a comprehensive approach to mission supported by adequate financial and human resources. National ownership and political solutions are equally important to prevent countries from falling back into conflict during transition and exit from the mission.

Nevertheless, the representative of Brazil underlined that there is a solid framework to protect civilians, as shown by the Geneva Conventions of 1949 and their Additional Protocols. The problem, he stressed, is not the absence of standards but the lack of respect for them.

The head of the European Union delegation also took the floor, as well as the representative of the Holy See, in his capacity as an observer.

The representatives of India and Pakistan took the floor for the second time.