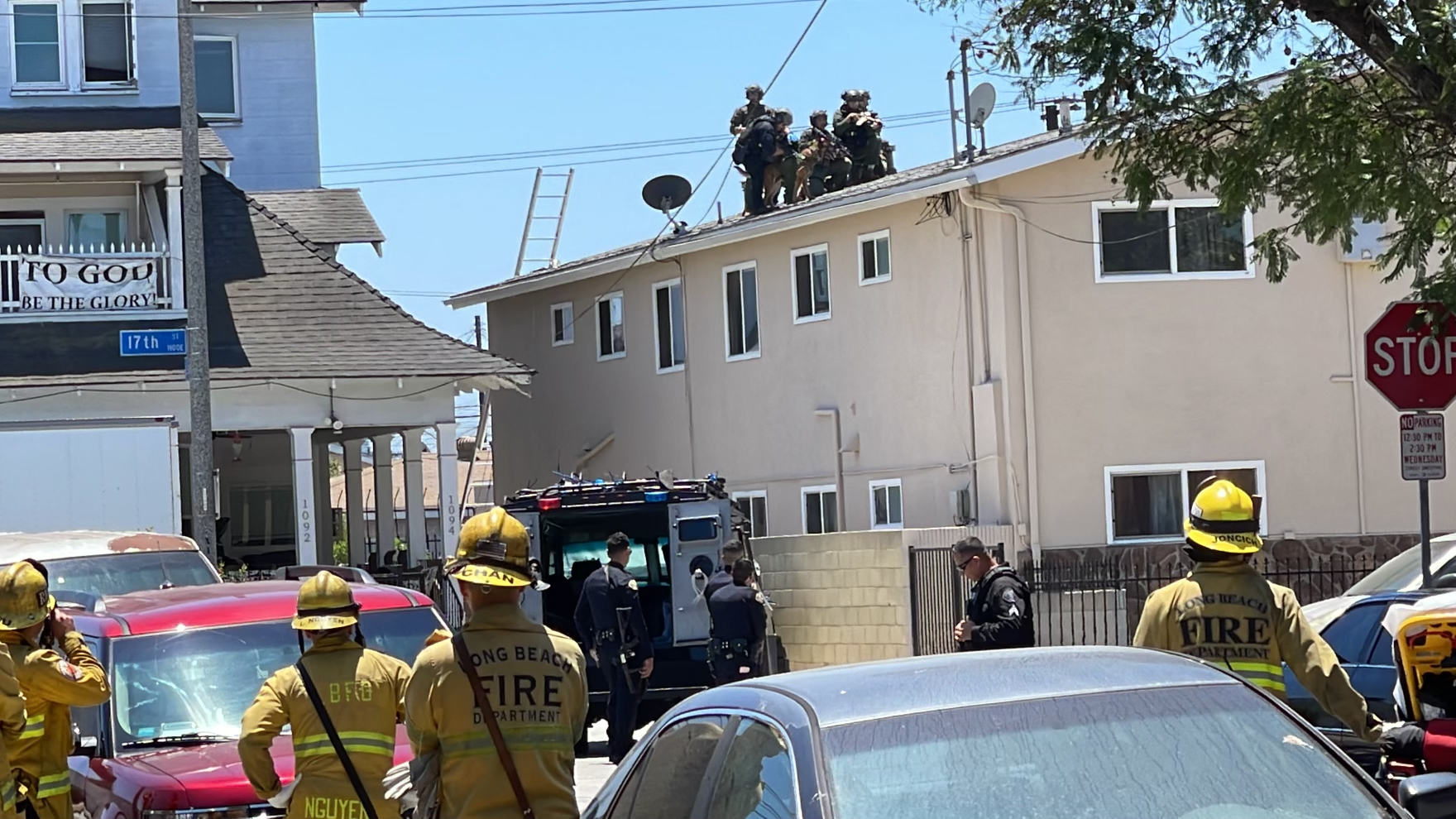 Police said the situation began around 11:10 a.m. with a 911 call about a dispute in a vehicle, which officers later determined to be a kidnapping, assault and attempted carjacking that took place. left the victim hospitalized. Police rushed to the scene in the 1000 block of East 17th Street, just east of Martin Luther King Jr. Avenue. When they arrived, the man had left the car and was already on the roof, according to the police.

A maintenance worker at the scene told the Long Beach Post that he met the man before police arrived. The worker, who asked not to be named because he was still shaken, said he was painting a building when he stopped to drink water. It was then that he saw the man running towards him and climbing his ladder. Once the man got up, the worker said, the man knocked over the ladder and refused to come down.

A man can be seen sitting on a roof in the distance. Photo by Fernando Haro.

The worker said the man seemed upset or had some sort of episode, so he offered him a glass of water before he saw the gun and ran away. The police quickly arrived and surrounded the building.

Video provided by a neighbor shows the man holding and waving something shaped like a handgun. He paces on the roof, sometimes shouting, “I’m not pointing it out. Police said they tried to defuse the situation while establishing a perimeter, activating SWAT and getting residents to safety.

In the video, police periodically fire less-lethal foam canisters at the man, some of which bounce off his body. When he reaches out with what appears to be the handgun, there is a sound of louder banging and he collapses onto the roof.

Police said he was pointing the gun at officers, “which led to the officers discharging their handguns and an AR-15 patrol rifle.”

After being filmed, the video shows the man sitting on the roof and someone shouting “help” before the video ends. Another video shows him standing and stumbling before sitting down again and collapsing forward.

Police said the man “continued to manipulate the firearm in his hand and refused to follow multiple commands to drop the firearm” before he “eventually became unresponsive”.

About an hour and a half after the shots rang out, heavily armed officers in tactical gear climbed a ladder to the roof.

Officers in tactical gear approached the man. He appeared unresponsive and officers could be seen giving him chest compressions after apparently pulling him away from his gun. pic.twitter.com/jDUqENzcOJ

After snatching him from his gun, officers could be seen giving him chest compressions. Fire crews quickly assessed the man and determined he was dead, police said. Authorities identified him on Sunday as 42-year-old Jaime Rodriguez.

No officers or bystanders were injured. The victim of the original abduction and assault is expected to survive, police said.

Editor’s note: This story was updated Sunday morning with more information from the police.