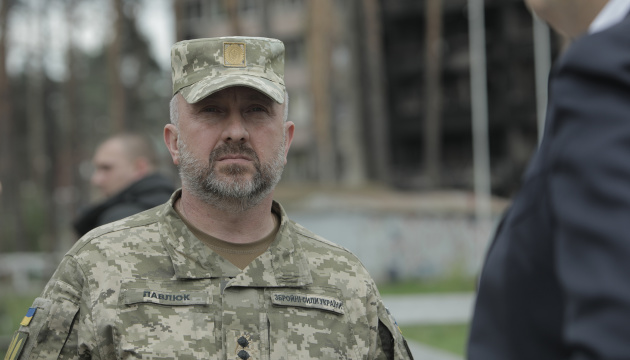 Eight years ago, on August 20, 2014, Ukrainian soldiers and officers first went into battle with regular units of the Russian army. Oleksandr Pavlyuk, Lieutenant General of the Armed Forces of Ukraine, Hero of Ukraine, then commander of the 24th Mechanized Brigade named after King Danylo, remembers those days and wonders why a withdrawal from positions is not always a defeat and why Ukrainian commanders are strong.

Donbass. A hot and tragic month of August 2014. At the time, the Ukrainian Armed Forces were not going through the best of times. Under the slogans of many politicians that we have no enemies and we don’t need a strong army, the best military equipment has been sold off and combat units have been reduced. Consciously or unconsciously, the army was brought to a non-combat ready state.

But despite all this, the professionals remained in the ranks and they did everything to preserve the equipment and save the military collectives and combat traditions. We could count on them in the most difficult moments, and they are the ones who kept this spirit, this moral force which enabled us to resist the Russian army for eight years and to force the “second army in the world” to retreat even after the start of a full invasion.

Following the appearance of “little green men” in Crimea, I was ordered to bring my brigade into full combat readiness. A few days later, a battalion battle group, composed mainly of contract soldiers, was ready to carry out the assigned tasks. We advanced and took up defensive positions in the Sumy region to prevent the attack of a powerful Russian group stationed on the border with Ukraine and ready to move towards Kyiv. In March-April we prepared defensive lines against the enemy which were ten times larger than our forces. We have done everything to make the enemy understand that, despite his great advantage, it will not be easy for him to defeat us.

In May, we received a new order, and from that moment the 24th brigade took part in the anti-terrorist operation. Then there were fights in Chervonyi Lyman, the battles of Yampil, Zakitne, the first battle losses, the liberation of Sloviansk, the battle of Siversk, the liberation and holding of the Siversk-Bakhmut line, the liberation of Lysychansk and many settlements along Luhansk. Without regular Russian units, which had several dozen times the advantage in manpower and equipment, the war would have ended already in August 2014 with our victory.

But the biggest and bloodiest battles for the 24th Brigade were the battles near Luhansk. At the end of July, after the liberation of Lysychansk, the brigade, without the battle group of the 2nd battalion, which was then in another group, marched more than a hundred kilometers and reached the border south of Luhansk. Then, continuing to hold our occupied positions, we liberated the settlements of Khriashchuvate and Novosvitlivka after heavy and exhausting battles. In fact, we closed the ring around Lugansk. Realizing the danger of complete encirclement, the enemy made desperate attempts to drive us out of these settlements. Powerful and prolonged artillery fire, tanks, deterrent attacks, during which the enemy did not count his losses. The enemy completely destroyed all buildings in Khriashchuvate with artillery fire. There was no longer any physical possibility of fighting under cover. But people resisted.

Eventually, the enemy stationed in Lugansk began to expire. Then an attempt was made to completely encircle the brigade.

On August 20, starting at 4 a.m., the enemy fired on our strong points with artillery for two hours. A cannonade that does not stop for a moment, hundreds of shells and mines, rockets, and after that a tank attack. There was no way out but to retreat, as the fortifications and equipment were destroyed by enemy fire. Subsequent events proved that was the right decision. After quickly orienting ourselves on the ground and regrouping, we ourselves imposed a battle on the enemy, which he definitely did not expect. As a result, the Russians withdrew, suffering heavy losses, and we re-established our positions on the previous lines.

I didn’t accidentally use the word “Russians” here. The whole world kept hearing about “tanks of the [Russian] defense industry” and “LPR/DPR militiamen”. And that day, based on the documents and maps of captured enemy equipment, we clearly saw that in front of us were regular Russian units – the division air assault station stationed in Pskov. We read in these documents that on August 12 they were at their permanent base, and already on August 18 they crossed the border into Ukraine. It was in this battle that a enemy groups, having suffered huge losses, completely lost its fighting ability and was withdrawn to Russian territory. However, everything did not end there. Having moved new military units, the enemy has many again tried to destroy our units, but we managed to understand the enemy’s maneuver in a timely manner, launch a fire strike and withdraw our units from the encirclement.

Then there was the battle for Lugansk airport.

Units of the 80th Brigade occupied positions here. Due to the constant artillery fire, the paratroopers lost all their combat gear and were surrounded by the enemy, but continued to hold their positions. For two days the gunners of our brigade prevented the enemy from entering the airport. But it became clear that further fighting at the airport was impossible. The decision was made to break through to our units. The brigade’s armored group broke into the airport. The guys thus created the conditions for the 80th brigade to avoid encirclement. Much has been said about the cyborgs of Donetsk. The defense of Lugansk airfield was no less heroic, and the exhausted men, exhausted, managed to rejoin their group.

During this time, the enemy was constantly renewing its forces. We were incredibly exhausted after two months of fierce daily battles. The probability of our encirclement and destruction increased every day. Therefore, the main thing at that time was to save people and combat-ready equipment in order to hold the enemy to a new defensive line. We pulled out in an organized fashion. A retreat is not always a defeat. The new defensive line was beyond the Silverskyi Donets River.

The enemy also tried to destroy us there, already in the base camp of the Dmytrivka settlement. We had planned such a scenario, material and personnel dispersed. Unfortunately, the strike was so powerful that the enemy managed to destroy some of our equipment. But we still saved people.

It was the most important thing for me personally. Each life saved of a soldier or an officer is proof that the value of a person is incomparable to the most modern technology. It is also a guarantee that we will win in future battles.

Even then, we were clearly aware that those fighting us were not miners, but a professionally trained army. This was evident from the first combat clashes. Competently equipped strong points, roadblocks, skillful use of anti-mine barriers. Prepared sabotage and reconnaissance groups, accurate artillery and mortar strikes – all this indicated not only the high professional skills of the enemy forces, but also their combat experience.

Unlike their bloody experience gained all over the world, we showed our ability to work in an organized manner, the thoughtfulness of actions, the desperate courage of the soldiers and the encouragement of the commanders for the lives of the soldiers. As a brigade commander, for example, I was always with my subordinates during the fierce battles of August and all the other months of this year 2014 and if I was not with them they would not see me as a commanding officer. They got used to my voice on the walkie-talkie and weren’t quiet until they heard it. When I fell ill once, the guys, not hearing my voice on the radio for a day, began to worry about where the commander was and why he could not be heard. So when I say that our relationship was built and is built on mutual respect and trust, those are not empty words. Our army is based on it.

That’s why they can’t defeat us.