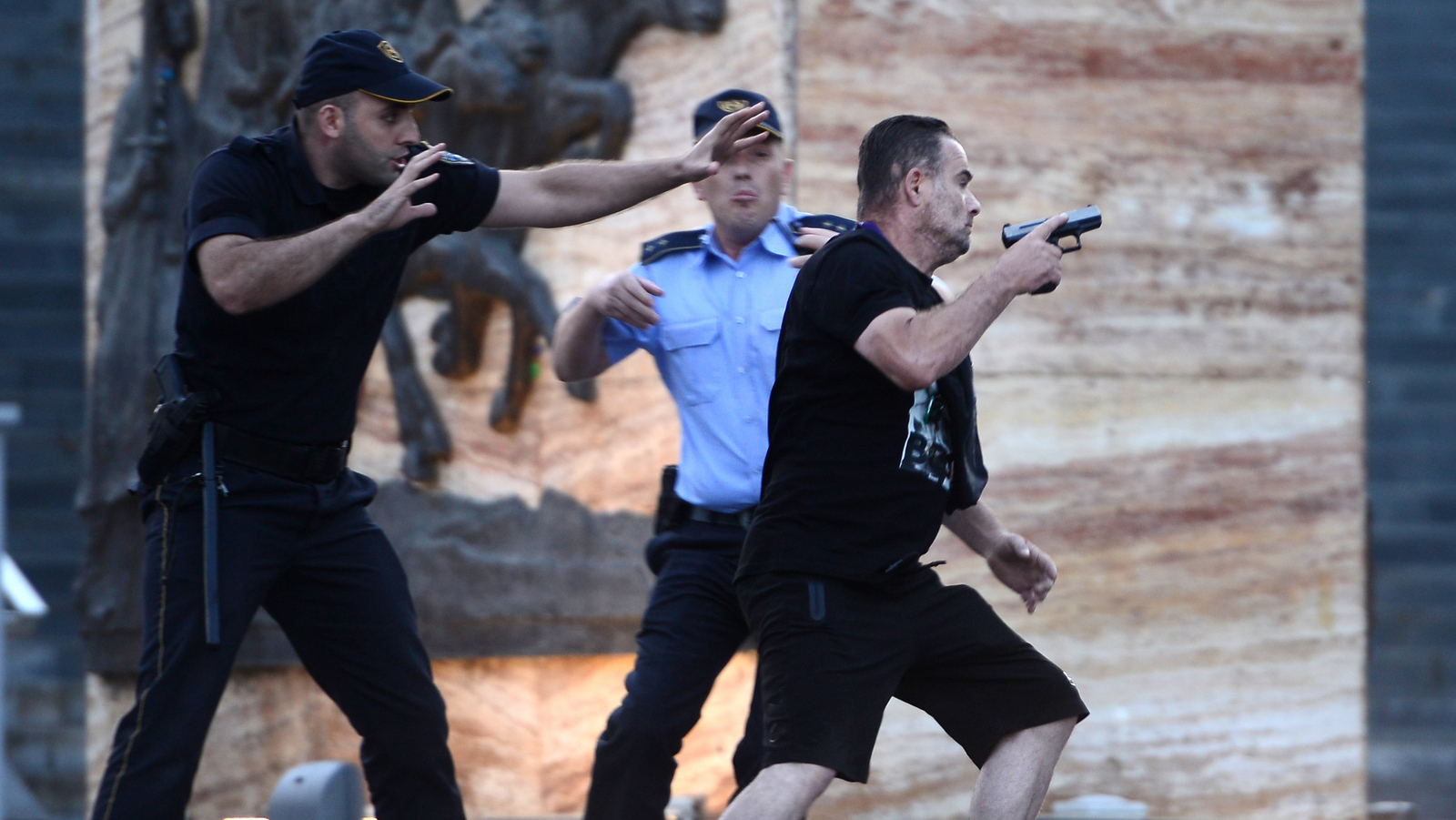 North Macedonian police say they arrested a person who held a handgun and fired shots in the air during Thursday night’s protest against the acceptance of a French proposal aimed at unclogging negotiations on accession of North Macedonia to the EU.

Police said they arrested the man at the site of the incident in the capital, Skopje, where opposing groups of ethnic Macedonian and Albanian protesters clashed. They said they found empty shells fired at the site.

“Yesterday, at around 8.10 p.m., outside a bank opposite the Skanderbeg monument, a police officer arrested EJ, 40, from Skopje, who had previously fired punches in the air as a group of protesters ran from the government to the Ministry of Foreign Affairs. said a police press release Thursday.

The scuffle between the two groups occurred at the entrance to Skopje’s Old Bazaar, as the large group of protesters marched along their pre-determined route.

The scuffle involved scuffles and an exchange of rocks and other hard objects, as police tried to defuse the situation. Soon after, a larger police force arrived and separated the two groups.

Media photographed at least two people holding handguns, with one pointing a gun at protesters. Several shots were heard.

The identity of the second person has not been officially released, although media speculated that he owned a nearby hotel which had been damaged.

The inter-ethnic incident sparked a heated exchange between political parties.

The main opposition party VMRO DPMNE, which has been organizing the rallies against the French proposal for the past five days, accused the government of plotting the incident to dissuade people from leaving.

VMRO DPMNE chief Hristijan Mickoski, who was not present at the site of the incident, claimed on Facebook that the armed people were there to kill him.

“He is the man who was supposed to kill me tonight. I demand that he be immediately arrested by the Home Office and by [minister Oliver] Spasovsky, Mickoski posted, along with a photo of one of the armed people.

The main ruling Social Democrats meanwhile blamed the incident on the opposition, saying they wanted to destabilize the country. They claimed that some of the Albanians who confronted the protesters are affiliated with the Alliance for Albanians, a party that has a coalition agreement with the VMRO DPMNE.

Interior Minister Spaskovski appealed for calm, insisting that police managed to prevent the incident from escalating into a much more serious matter.

The country’s main ethnic Albanian party, the Democratic Union for Integration, DUI, which is in government with the Social Democrats, also called for “calm and not to provoke inter-ethnic incidents and violence during the demonstrations”.

In 2001, North Macedonia suffered a short-lived armed conflict between ethnic Albanian insurgents and security forces. The conflict ended the same year with an internationally negotiated peace treaty that guaranteed greater rights to the Albanian community, which makes up around a quarter of the population.

The French proposal proposes a compromise agreement between North Macedonia and neighboring Bulgaria, which blocks the start of talks on North Macedonia’s accession to the EU on sensitive issues concerning identity, language and Macedonian history, which, according to Bulgaria, are essentially Bulgarian.

The government has not yet officially accepted the French proposal, but is considering it. Further protests against her were planned for Thursday.