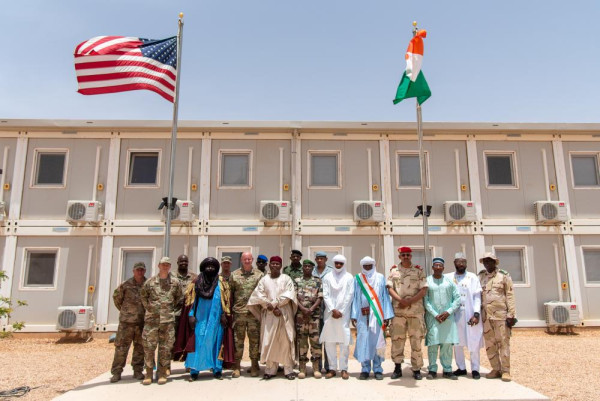 The commander of the 409th Air Force Expeditionary Group, Col. Kevin Lee, and the Commander of Zone Two of the Command of the Niger Armed Forces, Col. Abdoulaye Ango held a roundtable on July 12, 2022.

The discussion followed the 724th Expeditionary Air Base Squadron’s change of command ceremony and included topics such as the close relationship between the U.S. military and the Nigerien armed forces, as well as shared security interests within the Agadez community.

“There have been good relations with US forces and a lot of action to help the local community in Agadez,” Agadez Governor Magagi Maman Dada said. “We hope the support will continue as there is a lot of insurgency and insecurity in the region and it is imperative to tackle this.”

Building on strong foundational relationships, the U.S. Air Force prioritizes working with the Niger Armed Forces toward the common goal of peace and stability in the region.
For Lee, the meeting was important to discuss security topics, share thoughts and ideas needed to ensure safe, reliable and flexible air power in North West Africa and at Nigerien Air Base 201, Niger, operations essential to mission success.

Ango presented former base commander, U.S. Air Force Lt. Col. Christpher Jacobson, with an award and certificate of appreciation for his work with the Niger Armed Forces for being a good partner and thanked Lee and U.S. Air Force Lt. Col. John M. Barrett, commander of the 724th EABS, for their relationship. Follow-up meetings will be organized to discuss security in the region.

Partnerships in West Africa remain essential to counter the escalation of violent extremism in the tri-border region of Niger. The airmen, guards and troops located at Nigerien AB 201 are committed to sustaining peacekeeping operations.

Distributed by APO Group on behalf of the United States Embassy in Niger.

This press release was issued by APO. Content is not vetted by the African Business editorial team and none of the content has been verified or validated by our editorial teams, proofreaders or fact checkers. The issuer is solely responsible for the content of this announcement.