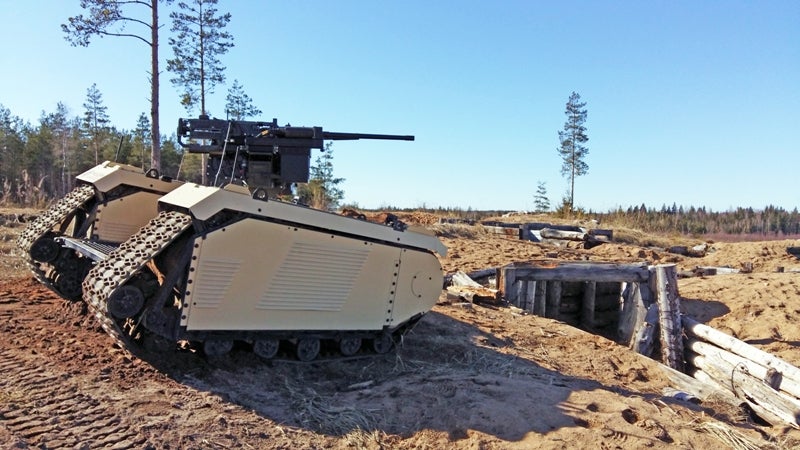 Milrem Robotics and ST Engineering have demonstrated the ability of the THeMIS Armed Combat Unmanned Ground Vehicle (UGV) to operate in Beyond Visual Line of Sight (BVLOS) conditions.

The demonstration was carried out last month during a live-fire exercise held in Tapa, Estonia, in cooperation with the Estonian Defense Forces, which signed a collaboration agreement in 2017.

It can serve as a force multiplier for dismounted troops in urban and rural areas.

The armed combat UGV is an all-terrain tracked system capable of traversing 60% of slopes and overcoming 24-inch deep water obstacles.

The vehicle can reach a top speed of 20 km / h and is powered by a diesel-electric drive which can ensure uninterrupted operation for 15 hours.

The combat UGV can be armored up to STANAG 4569 level 3, a NATO standard for the levels of occupant protection of logistics and light armored vehicles.

“The armed combat UGV is an all-terrain tracked system capable of crossing 60% of slopes and overcoming obstacles in deep water up to 61 cm. “

It has a BVLOS wireless control system for operation at a distance of 1000m in urban areas and 2500m in rural areas.

Operators will be able to control the system from a mobile or fixed crew station. The system helps reduce operator fatigue and improves combat performance.

In addition, Milrem delivered two THeMIS UGVs to the Robots and Autonomous Systems Unit of the 13th Light Brigade of the Royal Netherlands Army.

The vehicles will be used for a concept development and experimentation project that seeks to harness the potential of new unmanned platforms to increase combat power and reduce risk to soldiers.