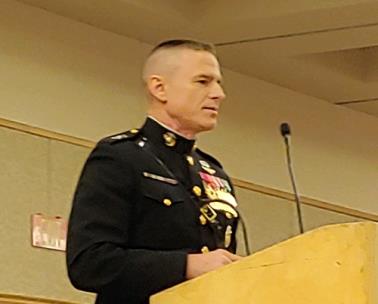 Marine Aviator Major General James H. Adams told attendees of the 73rd Annual Armed Forces Luncheon Friday “America must stand on the side of freedom or face a different world.” Major General Adams said: “Russian aggression is one of the reasons NATO exists and must continue.

Major General Adams has served combat missions in Iraq and Afghanistan and is a highly decorated officer. He currently works at the Pentagon and is assigned as Joint Staff J8.

The celebration of Armed Forces Day in Chattanooga began in 1949. It is sponsored by the Chattanooga Area Veterans Council. Congressional Medal of Honor recipient Charles H. Coolidge was among the World War II heroes participating in the inaugural parade.

General Adams said the Medal of Honor Heritage Center in Chattanooga “is a testament to what Armed Forces Day is all about.” He said Tennessee has 32 Medal of Honor recipients and he should be proud, that’s more than any other state.

Many officials, including 3rd District Congressman Chuck Fleishmann and Chattanooga Mayor Tim Kelly and Hamilton County Mayor Jim Coppinger attended the sold-out luncheon at the Downtown Convention Center. The program included a musical prelude by the Marine Corps Band stationed in New Orleans consisting of 50 active duty musicians from across the United States.

Before lunch, under the threat of a thunderstorm, the parade of the armed forces took place on Market Street from ML King Blvd.

The USMC Band opened the parade by playing military selections stopping at the Review Rostrum (in front of the City/County Courts Building) to perform for military officers, local officials and the general public.

CAVC board member Noel Long said this year’s parade featured a nine-school mass orchestra made up of more than 500 students. He said there were 12 ROTC units from 10 Hamilton County schools. He said the two were “very impressive”.

Although this is the year of the navy, all branches of the military were honored, both active and those who served.

Maj. Gen. Adams said he “agrees with those who say Chattanooga is the most patriotic city in the United States” and would love to come back and spend more time here.

Also present at the parade and lunch was World War II veteran Ralph Painter, who was awarded five bronze stars and helped fight the “Battle of the Bulge”.

Also in attendance was Vietnam Veterans of America President Jack McManus. Mr McManus will be at Valley Fest in Dunlap this weekend, an event to honor veterans and featuring a concert by the Charlie Daniels Band.

The Tennessee Vietnam Memorial Wall will be on display.