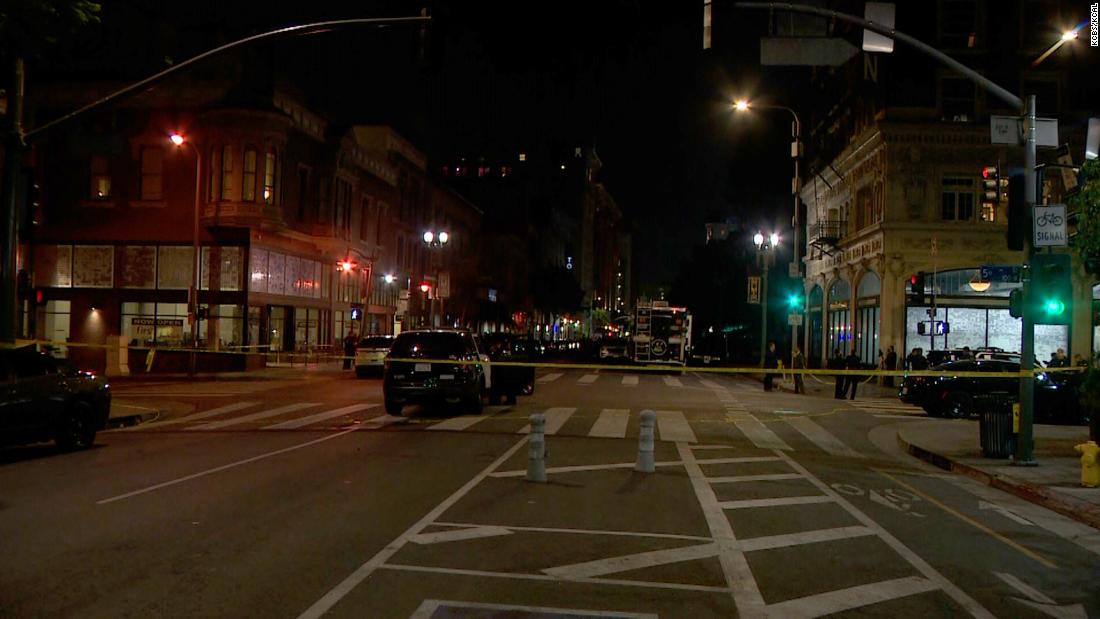 Shortly after 4 p.m. local time on Friday, police began receiving calls from “a man with a gun committing multiple crimes in the 8th district and Broadway,” the LAPD said in a statement. series of messages on Twitter.

The unnamed suspect had pointed a gun at another man’s face and pulled the trigger, but he did not shoot, police said.

The suspect then moved onto the street and entered a business where he met three members of his family, including a 14-year-old.

“The suspect pointed his gun at the group and shot them. One of the bullets grazed the side of the 14-year-old’s head,” police said.

The teenager was taken to a local hospital and is expected to survive, police said.

The gunman continued a few blocks down the street, where he attempted to hijack a woman standing outside his vehicle. When that didn’t work, police said, he got into an argument with a man on a bicycle, who saw the suspect reach inside his belt.

Nearby security officers reported LAPD officers chasing the suspect until he collided with an apartment building. At this point, police said they had established a perimeter and called in K9 and SWAT units for help.

Using surveillance footage from inside the building, officers located the suspect in a hallway. He appeared to be forcing a woman to go with him, they said.

“At that point, we knew we had a hostage situation,” police said. Los Angeles Police personnel monitoring the windows of the building were also able to see “the suspect pointing a gun at the hostage’s head.”

Believing that the suspect’s actions were “already incredibly violent” and fearing that he would kill the hostage, a SWAT team was dispatched to the building, police said. The incident ended in a shootout involving an officer, police said.

The suspect was pronounced dead at the scene, where police said they also recovered a gun.

The hostage was taken to a local hospital. Police have not commented on his condition.