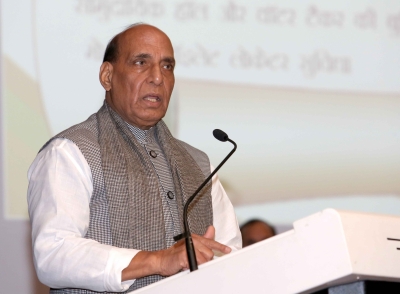 Keeping the armed forces ready at all times, our top priority: Rajnath Singh

Bengaluru: Noting that the economic, political and strategic equations are changing all over the world and that the world’s major powers are in a battle, Defense Minister Rajnath Singh said Thursday that India’s defense needs have also increased and the constant modernization of the armed forces is the need of the hour. .

In his remarks after the dedication of a seven-stage Flight Control System (FCS) Integration Facility at the Aeronautical Development Establishment (ADE), a laboratory of the Research and Development Organization for the defense (DRDO) here, he said: “Keeping us ready is our top priority. and we are constantly working to improve our strategic capabilities.

Whether it is technology or products, services or facilities, their advanced and faster development is the need of the hour.

Praising DRDO for its crucial role in enhancing national security, he said FCS is a unique project not only in the country but in the whole world and embodies the new energy of new India.

“This energy is one of technology, commitment, institutional collaboration between the public sector, private sector and academia and most importantly, ‘Aatmanirbhar Bharat’ as envisioned by Prime Minister Narendra Modi,” a- he declared.

The complex will also provide simulator training for fighter jet pilots, and Rajnath Singh described it as one of the most important components of the complex.

Simulators provide an opportunity to learn by making mistakes without the possibility of losses of any kind, he said.

Commending DRDO and L&T for the development of the hybrid technology, he expressed confidence that it will increase the productivity of the construction process, promote optimal use of resources, reduce losses due to wastage and be helpful for the rapid completion of projects.

In hybrid building technology, the column and beam elements of the structural frame are constructed with steel plates and the columns are hollow steel cross sections filled with concrete.

The slabs are partially prefabricated and all these structural elements are assembled on site. Concreting is done simultaneously to make the structure cast monolithically, thus eliminating any dry joints as in the case of precast construction.

In this case of hollow sections filled with concrete, the steel provides a permanent framework for the concrete core, which significantly reduces time and effort compared to conventional construction.

Rajnath Singh has described hybrid technology as a milestone for the construction industry and hopes that in the coming times India will become one of the leading countries in the field of construction technology.

He expressed the hope that although DRDO’s mandate is to develop futuristic technologies, its perquisites will also be available to the civilian sector.

“Our traditional construction industry is generally considered to be labour-intensive, high-risk and low-productivity. But, the way DRDO has built the FCS complex through hybrid technology, our infrastructure projects will be completed at low cost and in a timely manner in the time to come,” he said.

He called on DRDO to continue to explore new possibilities in construction technology and contribute to nation building through new innovations.

The FCS facility is a building with a plinth area of ​​1.3 lakh square feet. Construction was completed in 45 days, setting a unique record for the completion of a seven-story permanent building with hybrid building technology for the first time in the history of the construction industry in the country.