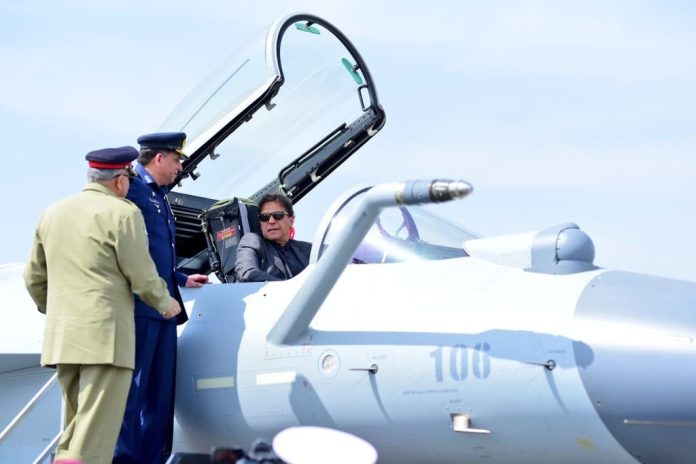 KAMRA: Prime Minister Imran Khan said on Friday that Pakistan has full confidence in its armed forces which possess the highest degree of capability to defend the country.

“We are confident that if anyone took any aggressive action against Pakistan, they would be met with full force by the armed forces,” the prime minister said in his speech at the fighter jet’s induction ceremony. JC-10 to Pakistan Air Force (PAF).

The ceremony held at Minhas Air Base in Kamra was attended by federal ministers, three service chiefs, a Chinese ambassador to Pakistan and members of the diplomatic community.

The Prime Minister said a country could remain free and independent until it was able to defend itself. He congratulated the nation on the historic occasion of the enthronement of the JC-10 aircraft, the medium-weight, single-engine combat aircraft.

Imran Khan thanked China for delivering the fighter jets to Pakistan in a short span of eight months. He expressed his satisfaction that the PAF is equipping itself entirely on the lines of modern and indigenous technology.

He said Pakistan was heading in the right direction towards development and prosperity. The Prime Minister mentioned that the country is experiencing economic growth with record tax revenue and foreign exchange.

He said the JC-10 was a fully integrated weapon, avionics and combat system and its introduction into the PAF would further enhance its professional capabilities. He said the occasion was a testament to the Chinese leadership’s willingness and support for Pakistan.

The Prime Minister, accompanied by three department heads, inspected the JC-10 aircraft and sat in the cockpit where he received a briefing on the jet.

Earlier, the Prime Minister inspected the guard of honor as the Pakistan Air Force contingent presented him with a salute. The Prime Minister watched an exciting flypast of various formations of aircraft including the newly inducted J10C, F-16, JF-17 and Mirage which displayed a sophisticated array of avionics and weaponry.

After the flypast, the Prime Minister witnessed the landing of five J10C aircraft which were inducted into 15 Squadron.

The J-10C is larger and can be fitted with a larger Active Electronically Scanned Radar (AESA) than used by the JF-17 Block 3. The aircraft can carry more advanced fourth-generation air-to-air missiles , including the short-range PL-10 and beyond visual range PL-15.