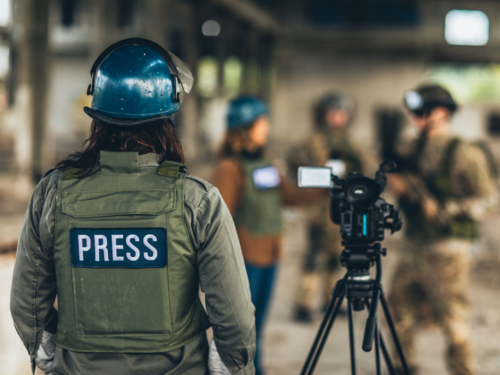 The International and European Federation of Journalists today expressed serious concern for the safety of journalists covering the war in Ukraine, following Russian Air Force airstrikes on Ukrainian towns, bombings in east and reports of troop movements in other areas near the country’s northern border.

Both Federations work closely with their affiliates in Ukraine, Independent Media Union of Ukraine (IMTUU) and National Union of Journalists (NUJU), to provide safety advice to journalists who will be covering the fighting from the front line, while traveling to and from war zones as well as in newsrooms.

The conflict that has erupted in Ukraine is a conventional war and the assessment of strategic moves and tactics is of paramount importance. A plan for gathering information in such an environment should be implemented and a good mitigation strategy and rapid response mechanisms are key to safe practice in such an environment.

To that end, the IFJ is issuing this Media Safety Notice, in addition to other similar NUJU initiatives, including a hotline and the establishment of a support committee for journalists.

1. Safety protocols for contacts: Newsrooms should adopt clear protocols for staying in touch with their personnel deployed to cover combat in or near war zones. These would cover the use of encrypted devices to communicate, designated contacts, times and locations of such contacts to reduce the risk of easy identification and location by malicious individuals. It is necessary to take into account the contacts use satellite equipment in the event of airstrikes due to the risk of location.​​They can also be monitored and targeted for hacking their phone to eavesdrop on their conversation with their contacts as well as jamming their means of communication.

2. Secure the repository of stories from the field: Journalists should not position themselves near military or strategic targets such as defensive positions, railway lines and fuel depots, as multiple rocket launcher systems, artillery and heavy mortars are likely to be used, posing a serious threat.

Live transmission and on-camera play (PTC) close to combat should be avoided as they expose journalists to identification and deliberate attack or when mistaken for legitimate military targets. Instead, journalistsshould be encouraged to deposit the material (films, interviews, etc.) as soon as possible in the newsrooms. This way they can remove material that may attract the wrong kind of attention.

3.Safe travel: It is crucial to consider how and when to travel to a conflict zone. No journalist should travel alone. It is advisable to avoid traveling at night, in bad weather and on landor aerial bombardments. As far as possible, journalists should travel together and preferably local/national with foreign reporters as this may offer some protection in the hands ofhostile soldiers. In moving convoys, keep a safe distance in remote areas andclose together in cities. However, they must not travel with vehicles in convoy if the convoy is a perceived target, especially a military or logistics convoy.

4. Manage group pressure
Be careful : When covering armed conflict, there can be pressure to get close to the action and rush from front to front to beat the competition by telling the latest story. Closer is not always better. Think of a higher and more distant position. Explicit images are rarely released.

This increases the risk of missing some details and ending in the wrong place. Journalists must resist the urge to take advantage of others in a dangerous situation. Their protection is all the greater if there is permanent consultation, they operate close to each other and watch over each other. It may look like slow journalism, but in a war situation it may be the only safe journalism possible.

Repair: This role is best played by IFJ union members in Ukraine and/or Russia. Because, even with the best-laid plans, it can happen that journalists are trapped behind military positions or find themselves in crossfire situations. In such cases, if they can establish a connection, the syndicate can contact the army headquarters and relevant ministries as well as embassies to secure their extraction.

Many journalists travel with little or no knowledge of the region or the application of local or international law, and unaware of their own rights as independent and neutral observers. Journalists should be aware of relevant protocols to the Geneva Conventions and humanitarian law defining non-combatant rights, political and legal conditions in the region, and should be aware of the role of the International Committee of the Red Cross. (ICRC)United Nations agencies and regional political bodies before leaving their homes.

Preparing the contact database: To provide this service, members of the IFJ union in Ukraine have created a database with the contacts of domestic and foreign journalists who seek their help, with copies of their passports, names of their media organizations, phone numbers insurance and phone numbers (as well as WhatsApp, Signal, Sat, etc.) they use in Ukraine. They should also have contacts with embassies in Kyiv/Moscow as well as with ICRC representatives in both countries. If possible, a webpage should be created on union member websites with easy access from the homepage where emergency telephone numbers and other important numbers such as helplines local authorities or the ICRC are available for journalists in need of assistance.