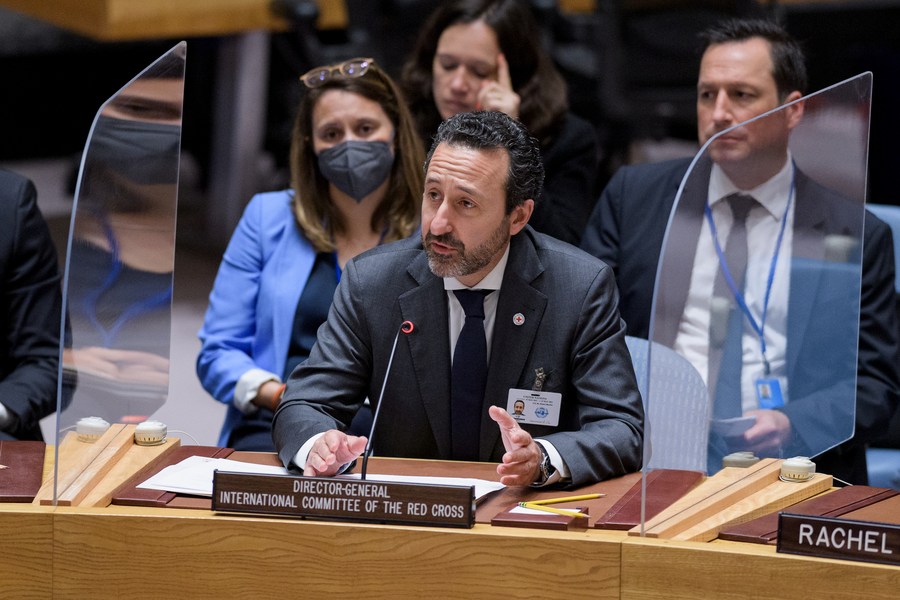 Director General of the International Committee of the Red Cross (ICRC), Robert Mardini (front), speaks during a United Nations Security Council open debate on the protection of civilians in armed conflict at United Nations Headquarters in New York, May 25, 2022. (Manuel Elias/UN Photo/Handout via Xinhua)

“I hardly need remind you of the enormous damage that urban warfare causes – mainly to civilians – all the more so when explosive weapons with a wide range of action are used”, declares Robert Mardini.

NEW YORK (United Nations), May 25 (Xinhua) — The Director General of the International Committee of the Red Cross (ICRC), Robert Mardini, on Wednesday highlighted three areas of particular concern regarding the protection of civilians in conflict armed.

Briefing a UN Security Council open debate on the subject, Mardini said the primary concern was the appalling human cost of wars in cities.

“I need not remind you of the extensive damage urban warfare causes – mainly to civilians – all the more so when explosive weapons with wide range are used,” he said.

This clearly raises serious questions about how parties to such conflicts interpret and apply the relevant rules of international humanitarian law. In fact, the concept of “military necessity” is most often abused – used as an excuse for the use of force rather than a reason to limit it. Risks often increase when weapons are supplied to belligerents by allies or partners without proper oversight, he said.

The second issue of particular concern is the rapid spread of disinformation, disinformation and hate speech during armed conflicts, Mardini said.

“We are seeing firsthand in our operations how this phenomenon reduces the ability of those affected to make informed decisions that impact their safety and dignity. It dangerously distorts information vital to human needs, such as access security, shelter and health We are also seeing an upsurge in misinformation – online and offline – that undermines humanitarian efforts to gain the trust and acceptance of those affected. humanitarian organizations not only hinder our work, but can create dangers for the people we are trying to protect and assist and for our staff,” he said.

The third concern is the growing pressure on frontline humanitarian organizations to help states obtain information for possible criminal prosecutions in armed conflict, he said.

The ICRC urges States to take decisive action in the three specific areas concerned: making the protection of civilians a strategic priority in the planning and conduct of all military and security operations in populated areas, avoiding and preventing the spread disinformation and misinformation in armed conflict and mitigate its impact on those affected, and ensure accountability for victims without compromising the neutral and humanitarian space in which humanitarian organizations must operate, he said. “Action in these three areas would go a long way to ensuring better protection of civilians everywhere in armed conflict. ■