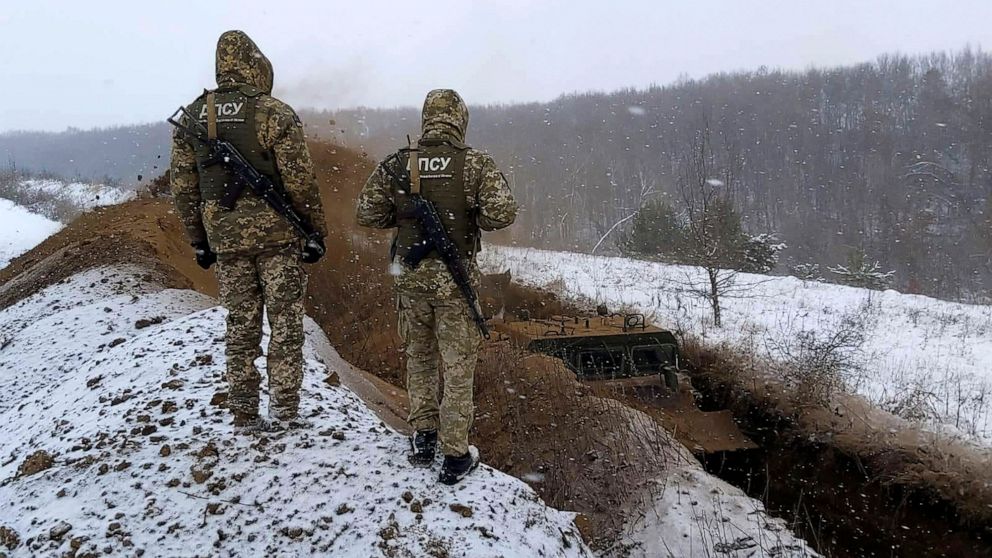 Russia’s Deputy Defense Minister warned foreign ambassadors of a “high risk” of conflict between the country and its neighbor Ukraine, a day after President Vladimir Putin threatened “diverse” military and technical responses if the West was not responding to its stated concerns.

These latest messages from Moscow are among those that have prompted the United States and other Western officials to fear that Putin is launching an assault on Ukraine, even after President Joe Biden warned him it would result in massive sanctions. .

The Biden administration has repeatedly called for diplomacy with Russia to defuse tensions and end the war in the eastern provinces of Ukraine, nearly eight years after Russian troops armed the forces separatists in a conflict that continues to rage and claim victims.

But Russia’s demands for security guarantees, including Ukraine’s ban on NATO membership, have been called “unacceptable” by US officials – perhaps on purpose, so that Russia can later claim to have given diplomacy a boost.

Russia has said it has no plans to invade, but has called on the United States, NATO and Ukraine to take its concerns seriously.

“We did not make the proposals just to see them blocked in terms of the diplomatic process, but in order to achieve a negotiated diplomatic outcome that would be set out in legally binding documents. We will aim for that,” Putin said on Sunday.

His deputy defense minister, Alexander Fomin, again accused NATO on Monday of provoking the conflict by sending warships and reconnaissance planes to support Ukraine. This echoes a statement by his boss last week, Defense Minister Sergei Shoigu, who claimed that Ukraine, with the help of American mercenaries, was planning a chemical weapons attack.

“The alliance has recently switched to the practice of direct provocations accompanied by the high risk of turning into an armed confrontation,” Fomin said at a meeting attended by envoys from 14 NATO countries.

It’s the kind of bogus pretext for an invasion that U.S. officials and analysts have warned Russia could create to justify an invasion.

“Russia is ostensibly outraged by a crisis that it itself has caused,” said Mick Mulroy, senior Pentagon official in the Trump administration and ABC News national security analyst. “It was Russia that sent around 175,000 troops to the border and threatened to invade again if its demands were not met – ‘Do what I ask, or I will attack and occupy a sovereign country against all international standards. ‘”

The estimated number of Russian troops near Ukraine ranged from 60,000 to over 100,000, with a leaked US intelligence document warning that Russia may be ready to rapidly deploy up to 175,000. US officials have cited these troop movements, as well as the Russian propaganda attacks on Ukraine, which they say have increased tenfold, and the bellicose rhetoric as evidence of a possible invasion.

But diplomacy could prevent war. The United States and Russia have agreed to hold talks in January to address each side’s concerns, as well as talks between NATO and Russia and meetings at the Organization for Security and Cooperation in Europe, according to US officials. The OSCE, a key security forum, has deployed a war monitor in eastern Ukraine for years as the conflict has claimed some 14,000 lives.

After coordinating a meeting between the Ukrainian government and Russian-controlled separatists last week, the OSCE said on Thursday the two sides were showing “strong determination to fully adhere” to a ceasefire agreement July 2020. The statement was announced by Biden’s National Security Advisor Jake Sullivan and the State Department, whose spokesperson said: “We hope the resulting peace creates space diplomatic policy necessary to defuse regional tensions and create a positive atmosphere for the continuation of discussions.

There was no “resulting peace”. Three Ukrainian soldiers were injured in shelling that lasted for hours on Sunday. There have been five times more ceasefire violations this month than last December, according to the OSCE.

But there have been notable Russian troop movements, according to the state-run Interfax news agency, which reported that more than 10,000 troops withdrew near Ukraine’s borders after military exercises. The Kremlin also said on Monday that it made sense to engage NATO directly on its security concerns, in addition to the United States.

Whether this is still a sign of hope that war can be avoided is not clear. U.S. officials said it was still unclear whether Putin had decided to invade, with tens of thousands of troops still in the region, including in Crimea, the Ukrainian peninsula invaded and seized by Russia in 2014.