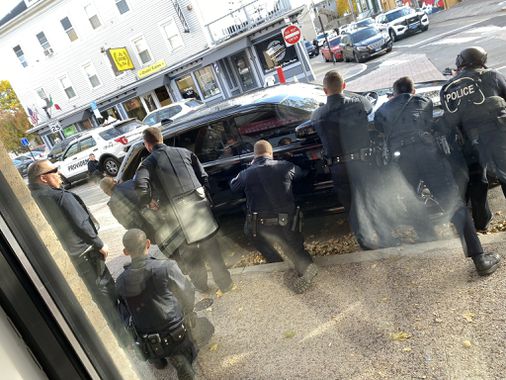 PROVIDENCE — A man charged with a drive-by shooting on Federal Hill a month and a half ago was arrested Thursday after barricading himself in his nearby barber shop.

Timothy Desjardins, 35, walked out of We The People hair salon about an hour and a half after an incident blocked Atwells Avenue, a major commercial thoroughfare. Timothy Desjardins is listed as the person who started the business in August.

“Patience, good methodical work by the Providence police to keep everyone in the nearby area safe, and then through negotiations, through conversations, he comes out of it safe,” Col. Hugh T. Clements Jr., Chief of Providence. police, told reporters afterwards.

The incident began shortly before 2.30pm when two officers, Ryan Malloy and Scott Campbell, spotted a man and noticed something “unusual” about him. Officers are trained to be able to detect when someone has a gun, Clements said. When they confronted the man, he entered the building at 374 Atwells Ave. with a gun and barricaded himself inside, Clements said.

They called in reinforcements and possibly a hostage negotiation team. It didn’t take long, by armed standoff standards, for officers Giuseppe Scarcello and Erick Fernandez to get him out of the building without further incident, Clements said. He credited the work of the police with bringing a peaceful end to a tense situation.

Desjardins will be arraigned Friday on various charges, Clements said.

Desjardins was also charged with a road rage shooting in the Walgreens parking lot across the street in September. He is out on $100,000 bail for felony assault and weapons charges. The victim was grazed with a bullet to the head, according to a Channel 10 report at the time.

Clements said other people needed to be evacuated from the building, which houses more than the barbershop, and other surrounding businesses. But no one else was in the barbershop with him at the time, Commander Thomas Verdi said.

Atwells Avenue, part of the Federal Hill neighborhood, is known for its culture and restaurants, including Italian cuisine – the colors of the Italian flag are painted in the middle. Normally bustling, it fell into a tense calm as police cruisers converged on the area, blocking the way from Tony’s Colonial Food to just about the Tammany Hall pub.

Jacob Kamborian, owner of Napolitano’s Brooklyn Pizza, was working Thursday afternoon when he saw a police car drive past on Atwells Avenue. Then another. Then another.

“They just kept coming,” he said.

Soon he saw more: SWAT police arrived in tactical gear, heavily armed and armored. He went out with clients — they were visiting the Albany, New York area for a college visit — to see what was going on. Police were hiding behind a patrol car. Eventually the police pushed them back, then even further.

Kamborian reassured upstate New Yorkers that the area occasionally experiences gunshots or stabbings, but nothing like that. It was unusual.

Rick Simone, executive director of the Federal Hill Commerce Association, said he was told to stay inside his building because it was not far from where the suspect barricaded himself.

Some onlookers stood on the roof of Tony’s Colonial Food to watch the situation unfold. People were still eating at nearby restaurants that weren’t blocked off, or standing next to the police tape if their cars were stuck inside the no-go zone.

When it was over, at 4:30 p.m. on a balmy autumn day, an area that had once been cordoned off by a police tape came alive, even as police continued to huddle in the area and two officers stood guard outside. exterior of barbershop.

“It was a safe ending for all of them,” Clements said. “Excellent work from the Providence police.”

Rick Simone, executive director of the Federal Hill Commerce Association, says the man police arrested is someone they’ve had trouble with before. This was Rick’s view from where he was sheltering in place. pic.twitter.com/9VxugvwrSZ