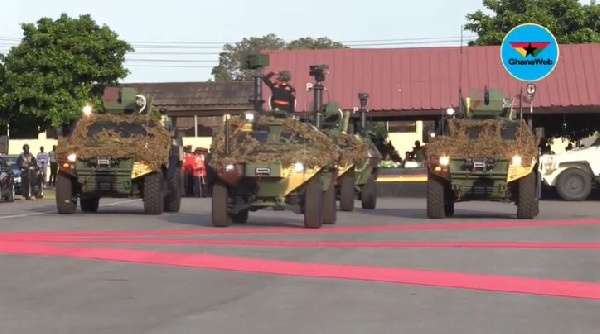 The GAFs have recently been massively reorganized by the government

The Ghana Armed Forces (GAF) have reaffirmed their readiness to deal with any threat to the country.

Brigadier General Michael Amoah-Ayisi, General Officer of the Southern Command, said the Forces would continue to uphold their constitutional mandate to protect the country’s territorial integrity from external aggression.

“The Ghana Armed Forces also have a secondary responsibility in restoring the internal security of the country in support of the Ghana Police Service and Civil Authorities,” he said.

Brigadier General Amoah-Ayisi said this on Friday during the Land Combat Firepower Show, an annual training event on the Ghana Armed Forces calendar.

The Ghana Air Force was represented with its aerial warfare capabilities.

The exercise saw the use of various light and heavy weapons including M16 and AK47 rifles, LMG, RPG, M80 and MG3 pistols.

The exercise is to allow students from the Higher Division of the Ghana Armed Forces Command and Staff College to appreciate the use of fire assets available to a battle group as part of a force operations and how they are employed in deep operations, close operations and rear.

Brigadier General Amoah-Ayisi said the GAF was the backbone of any ground operation, hence the exercise to hone its skills and readiness.

“We are all aware of the recent disturbing incidents involving certain secessionist groups with the intention of destabilizing the peace in the east of the country,” he said, and that the exercise was intended to demonstrate the determination of the Forces to do in the face of such threats. .

True Admiral Seth Amoama, Chief of the Defense Staff, expressed satisfaction with the professional disposition and presentation of arms, which had given him confidence in a better future for the Forces.

He said the government was doing everything possible to re-equip the Forces to perform their duties effectively and efficiently.

Funds for the 37th Military Hospital Phase III project were ready and work would begin soon, he said.