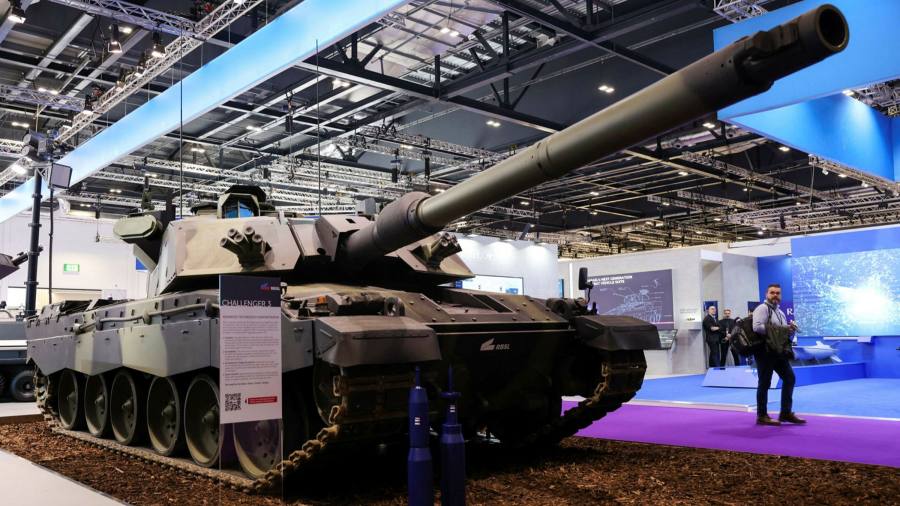 Shares of Rheinmetall, which makes tanks and armored vehicles for NATO countries, rose more than 30% at the start of trading in Frankfurt, while shares of Munich-based Hensoldt, which makes electronic sensors and is partly owned by the American private equity group KKR, jumped 45%.

Defense companies have previously been shunned by some institutional investors, who are required not to invest in armaments.

But Germany’s new commitment to spend more than 2% of its annual gross domestic product on defense against Russian aggression, as well as a one-time amount of 100 billion euros, has already led analysts to raise their stock price targets for entrepreneurs.

Scholz’s unexpected announcement on Sunday came days after German General Alfons Mais took to LinkedIn to say that the “Bundeswehr [Germany’s armed forces]the army that I have the privilege of leading, is more or less naked”.

He added: “The options we can offer politicians to support the alliance are extremely limited.”

A European industry executive also warned that it would take time for Germany’s defense boost to translate into orders for equipment.

“We have to understand what the government wants. Since this morning, we haven’t had any discussions yet. The cycles are quite long in this industry,” he said.

“It takes a long time to build this type of equipment. While more immediate ammunition orders were more likely, all ammunition should be what Ukraine needed in the short term.

Hensoldt, an Airbus spin-out whose products are integrated into fighter jets and naval vessels, already relies on German contracts for more than half of its sales. The German development bank KfW is its main shareholder, which gives Berlin the possibility of blocking a hostile takeover attempt.

About a third of Rheinmetall’s sales, whose origins date back to the 19th century, are linked to German contracts. Rheinmetall had already recorded record results for the last financial year in February and has seen demand increase since the Russian invasion of Crimea in 2014.

Submarine maker Thyssenkrupp also benefited from Scholz’s announcement, with shares up more than 8%. Shares of Jenoptik, whose electro-optical thermal imagers and rangefinders are used for military reconnaissance, rose more than 5%.

With the deployment of NATO forces in countries neighboring Ukraine, industry experts expect increased spending on items such as ammunition. Jefferies analysts highlighted British companies BAE Systems and Chemring among the companies likely to benefit.

Additionally, Germany’s decision to back down is expected to increase spending on several pan-European programs, including the Future Combat Air System to build a new fighter jet that has been mired in disagreements among its industrial partners.

Chancellor Scholz said over the weekend that the Bundeswehr needed “strong new capabilities”, including fighter jets, drones and tanks.

Plans are also expected to be accelerated for the Franco-German next-generation tank program, led by a consortium comprising Germany’s Rheinmetall, Kraus-Maffei Wegmann and France’s Nexter.

Berenberg analysts said they believe the potential for a follow-on Eurofighter Typhoon order from Germany to replace its aging Tornado aircraft has “strengthened”. The aircraft is jointly manufactured by BAE Systems, Airbus and Italian Leonardo.