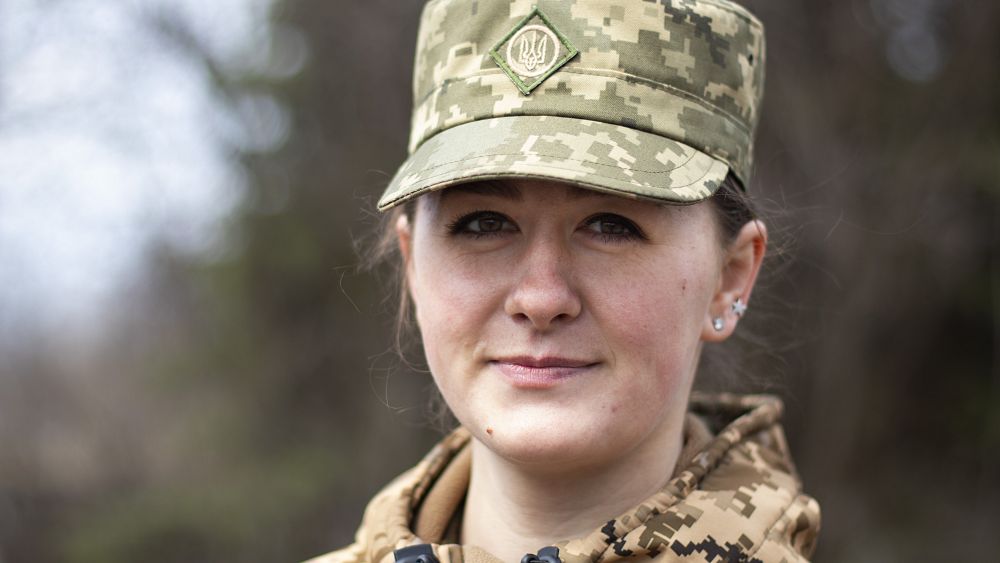 Near the front line in Donbass, Ukraine, Anastasia, 24, is a radio station operator, responsible for ensuring that soldiers at the front can communicate with each other.

Stationed near the city of Mayorsk, where several soldiers have lost their lives in recent months, she enlisted six years ago against the wishes of her parents,

“I’m proud to serve in the military. It’s my goal. I knew my family wouldn’t appreciate me joining, so I didn’t tell my mom and just went to sign up. After that moment, there was no Returning.”

Alla Akimova, 38, works in the kitchen preparing food for the soldiers and has decided to enlist to help in the war and be close to her husband.

“Before, I was at home with the children,” she said at a military post near Zolote. “But they’ve all grown up now, and I want to help make a difference here. I couldn’t go to war with young children.

In total, 23% of the Ukrainian army are women, according to figures published by the Ministry of Defense, a number that has increased 15 times in just ten years. About half of them are soldiers while the other half work in civilian support roles.

Unsurprisingly, this rapid growth is due to the conflict with Russia, which began after Moscow annexed Crimea and backed separatists in Donbass. But while it is easier for women to pursue careers in the armed forces than before, challenges remain.

“Traditional gender roles still exist, and they are hard to change. It’s not just one thing, it’s about traditions,” Hanna Hrytsenko is an independent researcher and part of the Invisible Battalion project in Ukraine, which studies the role of women in the military.

“People are used to a certain life and don’t see that it has to change,” she said.

Hrytsenko said gender roles are a holdover from the Soviet era when the state’s demographic priorities were to encourage women to focus on childbirth and child rearing. As a result, women tend to be pushed into medical or clerical work, Hrytsenko said.

“But things are slowly changing,” she added.

Anastasia wants to be on the front line – but she expects it to be a challenge.

“There are things that women can’t so easily be allowed to do, like being on the front lines. Not all women are allowed to go there because a lot of men don’t like it,” said- she declared.

It’s not always the conflict that makes the front line dangerous for women. With the Invisible Battalion project, Hrytsenko has documented instances of sexual harassment that include name-calling, teasing, and touching — but also incidents of female soldiers being raped by their male colleagues.

The problem is likely far more widespread than official statistics suggest, she said, with many victims reluctant to come forward.

“Women can only defend themselves physically at the moment or leave the army when something happens,” Hrytsenko said.

“Even though thousands of women work in the army, this conservative and patriarchal system persists. The system is often not designed to support women, who often have nowhere to go with their complaints.

Iryna Suslova, leader of the women’s movement “ZA MAJBUTNE”, a former member of the Ukrainian parliament, where she chairs the sub-committee on gender equality and discrimination, believes that the situation has improved over time.

“Until five years ago, women […] could not be tankers, snipers, participate in sabotage and reconnaissance groups, work in the infantry,” Suslova said.

But she says tackling sexual violence remains the biggest challenge, and not just in Ukraine.

“This problem is very common all over the world and in countries where there are military conflicts. Unfortunately, Ukraine is no exception. You have to set up hotlines, create bonds of trust, work, investigate and prosecute, which unfortunately is not the case today, despite the fact that such cases exist. They are public, but the cases are not very well studied.

Nursing sister Iryna Bazykina is one of the few to come forward in the media and tell her story. She recently told Radio Liberty that after asking to go to the frontline, a commander asked her to come to his house to discuss her future.

There, she said, he attacked her. Bazykina said the army tried to prevent him from filing a complaint, and when it did, it was dismissed “due to lack of sufficient evidence”.

Victoria Arnautova, adviser to the Commander-in-Chief of the Armed Forces of Ukraine on gender issues, commented in March on allegations of rape in the Ukrainian military, saying the government was developing international mechanisms to address harassment.

“We are studying the legislation, analyzing internal documents, how best to develop this mechanism, which would include ways to file complaints, to protect the rights of participants in the process.

“There is a need to initiate mechanisms such as confidentiality and anonymity, the ability to review cases without publicity. This is a very stigmatized area not only for the armed forces but also for society as a whole” , Victoria Arnautova told Radio Liberty.

In March, Lyubov Humeniuk, chief specialist of the Defense Ministry’s Department of Military Education, Science, Social and Humanitarian Policy, said the ministry was working to make more fields accessible to women in the military. .

“There are restrictions on access to officer positions in the part that legally protects women’s reproductive function. These are positions related to the use of explosives, toxic substances, diving work, firefighting, as well as submarines and surface ships, except for support positions moral, psychological and medical, as well as individual positions in the special forces. Currently, work is underway to open positions for military women in these units,” she said, according to Ukrinform.

Euronews contacted the Ukrainian Ministry of Defense for comment, but no response had been received at the time of publication.

Every weekday, Uncovering Europe brings you a European story that goes beyond the headlines. Download the Euronews app to receive a daily alert for this and other news notifications. It is available on Apple and android devices.