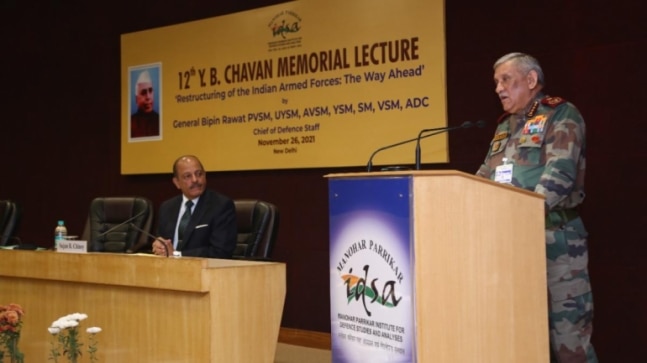 General Bipin Rawat, Chief of the Defense Staff (CDS), said on Saturday that the defense reforms will help the integration of the armed forces.

The Chief of the Defense Staff (CDS), General Bipin Rawat, on Saturday stressed the need to balance the needs of the armed forces within the overall context of national resource and infrastructure needs.

General Rawat delivered Friday the 12th YB Chavan Memorial Lecture, organized under the aegis of the Manohar Parrikar Institute for Defense Studies and Analysis (MP-IDSA), on the theme “Restructuring of the Indian Armed Forces: the path to follow “.

In his opening speech, General Rawat addressed the concept of strategic borders as opposed to geographic borders. Highlighting the difference between “military might” and “military might”, he underscored India’s dominance in a changing security scenario.

He recalled the journey of the Indian armed forces over the decades and the lessons learned from various wars that led to the current emphasis on integrated functional commands and theaters.

General Rawat also stressed that in order to face the challenges of the future battlespace, it is essential to pay adequate attention to cyber threats, the integration of special forces, the reform of the current tri-service commands and ” Atmanirbhar Bharat ”in defense manufacturing with the participation of the public and private sectors.

He said the defense reforms would help optimize and integrate the strength and responsibilities of the three defense wings, which in turn could be best exploited by a single commander in charge.

He argued that while actual combat may be scarce in today’s times, one should still be prepared for any eventuality.

The YB Chavan Memorial Lecture is an annual conference organized by MP-IDSA in collaboration with the Yashwantrao Chavan Pratishthan since 2010.

Click here for IndiaToday.in’s full coverage of the coronavirus pandemic.