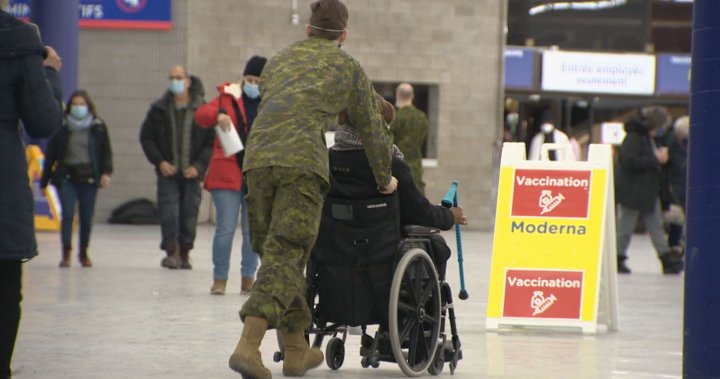 Thursday was the first full day during which members of the Canadian military participated in the deployment of the COVID-19 vaccination in Quebec.

The troops do not administer vaccines to the public, according to Lt. Col. Ban Doran of the 34th Combat Engineer Regiment and commander of the Montreal Territorial Battalion.

Canadian army goes to Quebec to speed up COVID-19 vaccination

Their role, for the moment, is to help people with reduced mobility, to guide and provide administrative assistance.

“So basically entering data to support the work being done to guide people through the different vaccination sequences,” he told Global News at the Olympic Stadium.

0:57
Canadian army goes to Quebec to speed up COVID-19 vaccination

Canadian army goes to Quebec to speed up COVID-19 vaccination

The deployment follows Quebec’s call for federal help amid the recent surge in COVID infection rates and a public relations campaign to deliver third doses. It is part of Operation Vector, “the Canadian Armed Forces (CAF) support to federal, provincial and territorial governments for the distribution of COVID-19 vaccines,” according to a Government of Canada website.

To prepare for this posting, the military took compulsory courses, according to Doran.

“The ministry offers a number of online courses that every troop, every member must take,” he explained. “All the people here have taken these five courses.”

This is the second time during the pandemic that the province has received assistance from the military. In 2020, they increased the medical staff of retirement homes.

However, the members currently deployed are not medical specialists.

Sending troops to hospitals to alleviate staff shortages remains to be determined, according to the Quebec government.

Currently, the focus is on increasing vaccination rates.

“In January, we will be vaccinating nearly three million Quebecers,” said Daniel Paré, director of the Quebec vaccination campaign in a provincial update on COVID-19 on Thursday. “It will probably be the same level in February and March.”

Paré also stressed that assessments are underway to see if additional troops will be requested and where elsewhere in the province they will be sent.