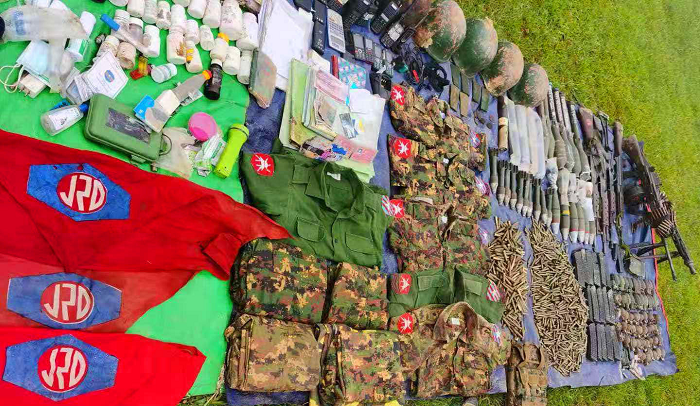 Sai Wansai – When the Kachin Independence Organization (KIO) released a Kachin-language statement on August 24, many wonder what became of its chairman, General N Ban La, saying his organization will uproot the dictatorship military with the people and that there will be no other way to build a better future for the country.

On August 10, the day of the Kachin Martyrs, Kachin News Group reported part of General N Ban La’s speech commemorating the day by saying, “The KIO has decided to crush and uproot the Bamar army, the doctrine of the racial supremacy as well as the revolutionary alliance, public Bamar and organizations politically and militarily through systematic preparation.

The military coup junta has murdered, tortured, robbed the public and burned people’s homes like an incomparable fascist in the 21st century, he added.

But on August 24, the KIO released a five-point statement that included that in order to avoid major destructive wars, relevant stakeholders should meet and find a solution through negotiations.

The statement said the country fell into obscurity after the February 1 military coup; sad at the death of many people from Covid-19; and grateful to the great neighboring country for its help against the pandemic.

However, the next day, August 25, perhaps due to strong criticism of him, KIO spokesman Colonel Naw Bu retracted the statement saying, “We are not promulgating the statement to lead. a ceasefire and negotiate with the military council. “

“If the junta launches military offensives, we will be forced to defend ourselves. We are ready for a defensive war, ”he added, as the junta’s military activities increased, according to the recent Myanmar Now report.

Meanwhile, heavy fighting broke out in Kokang near the Shan-China border. On August 28, the 525 Light Infantry Battalion and Kachin Independence Army (KIA) and Kokang or Myanmar National Democratic Alliance Army (MNDAA) clashed, where the entire junta battalion was wiped out and two of its commanders killed, according to news from Kachinwaves.

As for the victims of the junta, other news agencies such as Myanmar Now, Kachinland News and Kachin News Group have not confirmed the figures although they are deemed to be quite high.

Under such circumstances, it is difficult to understand why China is against armed conflict along the Kachin-China border but remains silent on the clashes in Kokang, on the Shan-China border.

Thus, KIO’s opening statement may either be to please the large neighboring country or to pressure to project such a posture. An unconfirmed but reliable Shan source said the KIO was forced to agree to release such a statement. According to some sources, the source also said that Chinese authorities have told the KIO to avoid an armed confrontation with junta troops along the border and speculation is that the junta could likely receive the same message.

According to a recent report by The Irrawaddy: “Chinese officials have delivered Beijing’s message to regime leaders that it wants the NLD to continue to exist as a political party.

However, this still cannot be taken as a verified Chinese official position.

Apart from that, during a recent press conference by General Zaw Min Tun, the junta spokesman, said they were closely examining KIO’s statement, although it is not clear whether the offensives planned by the junta against the Kachins would be lifted.

But the irony is that Mong Ko, along the Shan-China border, the clashes between the combined force KIA and MNDAA and the Burmese army would not have taken place without China’s consent, as the former are influenced by China in a kind of patronage. customer relationship. And even more so now, due to the United States’ withdrawal from Afghanistan which calls into question its ability and commitment to be on the right side of the democratization process – read: nation building and state building – and the non-Bamar ethnic resistance movements for their rights of self-determination.

One explanation could be that China is dissatisfied with the involvement of the local junta’s proxy Kokang administration in cooperative criminal activity and money laundering that benefits the military junta. And to show his displeasure, he could have given the green light to attack the junta troops.

“Kokang hotels and casinos (owned by relatives of the Kokang administration) host a full range of criminal activity. USIP analysis of Chinese court records shows that since 2010, Chinese judges have heard more than 1,300 cases involving cross-border crimes from the Kokang SAZ (self-administered zone). About 800 involved narcotics, 181 involved gambling, more than 300 allegations of smuggling and 38 kidnappings. These include several cases related to Bai and Wei family businesses, ”writes the article titled“ Myanmar’s regional crime websites profit from post-coup resurgence: Kokang’s story ”, written by Jason Tower and Priscilla A. Clapp, and published by the United States. Institute of Peace.

In short, China is in a dilemma, because it cannot entirely side with the junta and harvest the wrath of the Burmese people, which is not good for it in the long term, even if it is able to hold out. major towns and cities at the moment. At the same time, supporting the parallel Government of National Union (NUG) led by the deputies of the National League for Democracy is not the solution, even if it has de jure assets to recognize as a government, of territorial facto control is not there, so to speak.

Thus, keeping the relationship with the two camps, the junta and the parallel NUG government, may be the temporary solution, while projecting a pragmatic realpolitik for its national interest, until the UN General Assembly in September. make a binding decision on which party should represent the country at the United Nations.