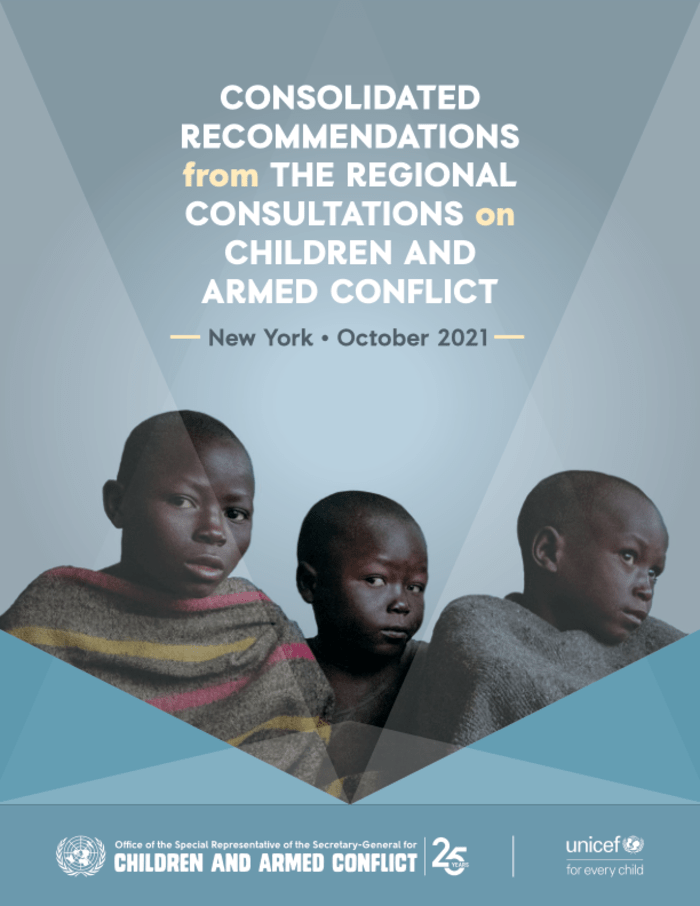 NEW YORK, 28 October 2021 – The Office of the Special Representative of the Secretary-General for Children and Armed Conflict (CAAC) and UNICEF released a new report today, as part of the United Nations’ ongoing efforts to improve the protection of children living in conflict.

Released as the world approaches the 25th anniversary of the mandate of children and armed conflict, the report – Consolidated Recommendations from the Regional Consultations on Children and Armed Conflict – outlines best practices and lessons learned in implementing the mandate of the CAAC based on the broadest consultations on the matter ever undertaken with United Nations field operations and other partners on the ground.

The CAAC mandate is an important tool in the efforts of the international community to prevent and end grave violations against children, including killing and maiming, recruitment and use, rape and other forms sexual violence, attacks on schools and hospitals, kidnappings and denial of humanitarian access.

The report was produced jointly by UNICEF and the Office of the Special Representative of the Secretary-General for Children and Armed Conflict, with support from the Department of Peace Operations (DPO) and the Department of Political and Peacebuilding Affairs. (DPPA), in order to strengthen the overall efforts of the United Nations in the implementation of the mandate of the CAAC to advance the protection of children affected by conflict.

More than 30 UN entities and other key partners were represented at the four regional consultations held between 2018 and 2020. The recommendations come from those who directly implement the CAAC mandate on the ground, making them particularly relevant.

“The complex political and security contexts in the situations on the CAAC agenda as well as transformations in the means and methods of warfare continue to test the adaptability of partners involved in the protection of children affected by conflict”, said the Special Representative of the Secretary. -General for Children and Armed Conflict, Virginia Gamba.

“Children are always among the most vulnerable in times of conflict, and keeping them safe and providing them with the care and protection they desperately need is at the heart of UNICEF’s work,” said the Deputy Executive Director of UNICEF, Omar Abdi. “These consultations represented a unique opportunity for child protection practitioners in the field to share their experiences and best practices, to explore ways to strengthen the overall United Nations efforts in the implementation of the monitoring and reporting mechanism and to identify the areas in which the reinforcement of our efforts and our capacities is necessary.

The main objectives of these consultations were to promote broader UN engagement on the CAAC mandate among field entities, to exchange lessons learned and best practices within and across regions, to strengthen collaboration with the SRSG CAAC at the political level if necessary, and to identify possible capacity building needs for specific contexts.

Participants’ recommendations include that the UN develop additional practical guidelines for UN entities involved in monitoring and reporting on grave child rights violations in the field, to identify gaps in monitoring and documentation of grave violations of children’s rights, and to establish specific capacity building plans, as well as to develop regional and/or sub-regional strategies on CAAC with relevant regional actors.

Although the implementation of several recommendations is already underway, a full roll-out plan will be developed, and participants and organizers agreed that such consultations should take place more regularly, ideally every 5 years.

ABOUT UNICEF UNICEF works in some of the world’s toughest places, to reach the world’s most disadvantaged children. In 190 countries and territories, we work for every child, everywhere, to build a better world for everyone. For more information about UNICEF and its work for children, visit www.unicef.org

Fabienne Vinet, Office of the Special Representative of the Secretary-General for Children and Armed Conflict +1-917-288-5791 / [email protected]