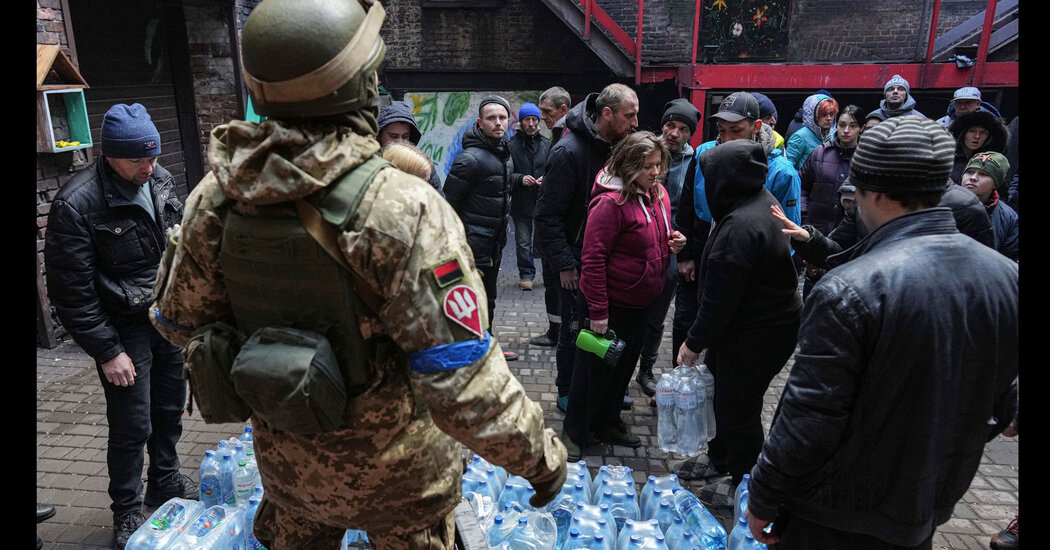 If you have read the works of brave journalists in Mariupol this week, you know the people of this town are trying to survive, not just shelling by Russian forces. They also try to survive without water.

This is unfortunately a recurring feature of war.

We saw it in Syria in 2016, for example, when the people of Aleppo, the northern city besieged by government forces, was deprived of running water. We saw it again the following year, when residents of the capital, Damascus, saw their taps dry up as both warring sides accused each other of damaging water infrastructure.

In 2018, clashes between rival groups destroyed water tanks at a hospital near the city of Hodeidah, Yemen. In 2019, Al Shabab, an extremist group, blew up a water tank in Somalia.

These are documented in a logbook of human cruelty, released this week by an Oakland-based research group called the Pacific Institute. It’s called the Timeline of water conflicts, and he lists the episodes in human history when access to water sparked unrest or became a weapon of war. Sometimes water resources become what the report calls a “victim” of the conflict: tankers explode, wells are poisoned.

Climate change can intensify the risks. A hotter planet often makes dry places drier and hotter, fueling competition over an already scarce resource. It is difficult to know what role climate change plays in each conflict and, most certainly, mismanagement and increasing demand for water play an equally important role, if not more.

But, said Peter Gleick, president emeritus of the Pacific Institute, who has studied water conflict for decades, “climate change is unambiguously worsening the very conditions that contribute to water conflict: drought, scarcity and inequality”.

Water-related conflicts have risen sharply over the past 20 years, according to the study. My colleagues have written about many of them. Farmers and herders have clashed in parts of Africa over access to water, conflicts all the more acute in a region that has suffered unusually severe droughts. Anti-government protests have erupted in Iran over water scarcity. The water divide has torn apart several former Soviet states in Central Asia that straddle the Amu Darya River.

Since 2000, Gleick pointed out, a quarter of the conflicts triggered by access to water have taken place in three water-scarce regions hit hard by global warming: the Middle East, South Asia and Africa. sub-Saharan.

Separately, the United Nations University estimate that 19 countries in Africa with a total population of 500 million people face water insecurity. At the top of the list are three countries that are no strangers to conflict: Chad, Niger and Somalia. Most countries on the continent face higher levels of risk from extreme weather events, the study adds, as climate change is making them more frequent and severe, exceeding countries’ adaptive capacity.

The long-standing drought affecting the western United States is expected to continue this spring, the National Oceanic and Atmospheric Administration said Thursday. As my colleague Maggie Astor has reported, most of California is return to “severe” or “extreme” drought after a brief respite during the winter. In central California, the country’s fruit and nut basket, the three-year rainfall total is “probably the lowest since modern record keeping began in 1922,” Maggie reported.

A call to save energy: With a global crisis looming, the International Energy Agency has called on countries to encourage conservation.

What war means for electric cars: The price of nickel, an essential ingredient in most batteries, has soared on fears that Russian supplies could be cut off.

Inside Endurance Research: More than a century after sinking in Antarctic waters, Ernest Shackleton’s ship was found with only days left for the expedition.

Other things we track

Before You Go: The War for the Rainforest

The Ituna-Itatá Reserve in Brazil is a grim illustration of the intractable forces destroying the Amazon. It was supposed to serve a dual purpose: to slow deforestation through broad restrictions on logging, ranching, and mining, while simultaneously protecting indigenous cultures. Instead, since the election of President Jair Bolsonaro in 2018, it has become one of the most invaded indigenous territories in the country.

Thanks for reading. We will be back on Tuesday.

Contact us at [email protected] We read every message and respond to a lot!