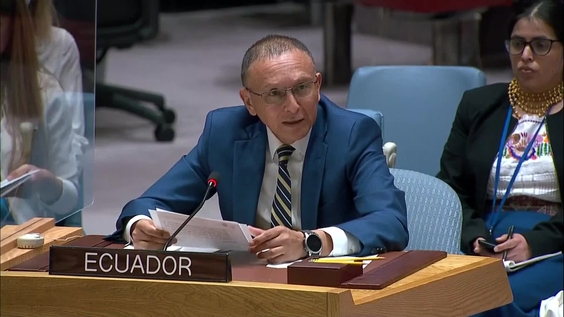 In a harrowing account of his own abduction in South Sudan, where an armed group tortured him and killed his father in front of them, the founder of the organization Similar Ground today called on the Security Council to apply the myriad resolutions he passed to ensure the safety of children around the world who are at the mercy of wars and conflicts they did not start and should never be forced to endure.

Patrick Kumi’s briefing, together with those of the Special Representative of the Secretary-General and the Executive Director of the United Nations Children’s Fund, opened the Security Council’s annual open debate on the six grave violations against children in situations on the Board’s agenda. More than 70 speakers took the floor to describe the actions desperately needed to end the recruitment and use of children, killing and maiming, kidnapping, rape and other forms of sexual violence, attacks on schools and hospitals and the denial of humanitarian access – crimes laid bare in the Secretary-General’s latest report (document A/76/871-S/2022/493).

“It’s just a story,” Mr Kumi said of his experience. Describing Similar Ground as a community organization helping children recover from trauma, he said: “There are thousands of children right now who are going through what I did. He urged the Council to include “people like me” in the decisions it makes, acknowledging that while he was grateful for the opportunity to speak today, “a young man, once per year is not enough. Young people affected by conflict need more open doors at the United Nations to help design and lead responses.

In this context, Virginia Gamba, Special Representative of the Secretary-General for Children and Armed Conflict, introducing the report, said that the United Nations had verified 23,982 grave violations in the 21 country situations and 1 regional monitoring mechanism covered by its mandate. Of these, 19,165 were child victims.

“This represents an average of 65 grave violations committed against children every day, every week, every month of the year,” she said. In addition, 8,000 children were killed or maimed, making this the most widespread of all grave violations.

Although she pointed to signs of hope – with 17 joint action plans implemented by the parties, three of which were signed in 2021 – she said it was essential that UN operations be mandated, adequately staffed and funded to carry out vital interventions in monitoring and reporting, engaging with parties and securing the release of children from conflict.

Catherine Russell, Executive Director of the United Nations Children’s Fund (UNICEF), paused to reflect on the appalling nature of the information presented in the Secretary-General’s report. “Children – and childhood – are under attack,” she said, noting that the cases only represent those the United Nations has been able to verify. Many others could not be reached. Reflecting on how appalling the information in the Secretary-General’s report was, she said, “The world has let them all down.

She called on Member States to insist on respect for international humanitarian law and to go beyond the requirements of the law. “You have the power to issue military orders with zero tolerance policies on serious violations against children,” she said. “Please use this power.”

In the ensuing discussion, delegates spoke forcefully about the cycles of violence that keep children trapped in a constant state of terror and trauma, with the New Zealand delegate expressing the view of many acknowledging: “ We are all horrified by the way children are used, abused and manipulated, their lives turned upside down, their futures destroyed.”

Several delegates, including from Gabon, Liechtenstein and Ecuador, called for greater attention to be paid to the protection of girls. Those from the UK, Ireland and Iran specifically urged the Taliban to allow all Afghan girls back into classrooms, while the US representative said the Council had been clear on the fact that if the Taliban want normalized relations with the global community, schools must be opened to all female students, without delay. “We, as the international community, have not done enough to [the] The Taliban respect their obligations,” added the representative of Poland.

In this spirit, the delegate of Lebanon brought the Council to a moment of judgment. “We have to admit that we have failed to protect children around the world”, but not because none of the international conventions, laws or action plans had the necessary seriousness or force. “We failed because there is no will to implement them.”

Thus, many delegates focused on solutions. The representative of Botswana, speaking on behalf of the Group of Friends of the Responsibility to Protect, encouraged the United Nations to investigate allegations of cross-border abduction and trafficking of children for adoption.

Representatives from Italy, Portugal and Yemen focused on compliance with the Principles and Guidelines for Children Associated with Armed Forces or Armed Groups (Paris Principles) and the 17 Vancouver Principles on the Protection of childhood in peacekeeping. A number of delegates – notably from Switzerland, Spain and Denmark, speaking also on behalf of Finland, Iceland, Norway and Sweden – also called for the full implementation implementation of resolution 2601 (2021) on the protection of education in armed conflict.

The delegate of Ukraine, for his part, welcomed the Secretary-General’s decision to list his country as a situation of concern in the next annual report, triggering the daily monitoring of gross violations against children in its territory by the whole United Nations. Since the February invasion by Russian forces, almost 2 out of 3 children in Ukraine have been displaced by the relentless shelling.

The delegate of the Russian Federation countered by citing statistics on child victims from Kyiv to Donbass since 2014 and rejecting unfounded claims that Russian authorities are abducting children.

Taking a holistic view, the delegate from Albania highlighted the need for accountability, dedicated capacity to protect children in UN peacekeeping and special political missions, and protection of humanitarian personnel in the field. More so, he stressed that it is “our moral duty and our legal responsibility” to do whatever is necessary to ensure that children are brought up with care, love and protection, away from violence and conflict.

The representatives of India and Pakistan took the floor a second time.